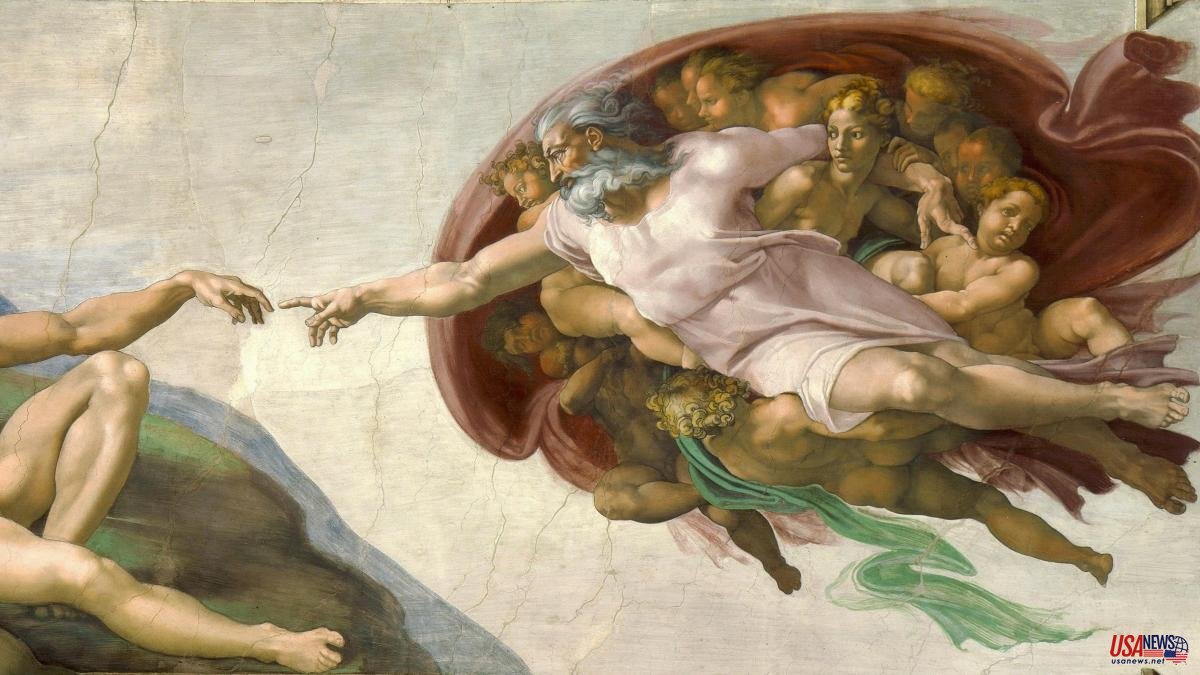 Michelangelo never wanted to paint the Sistine Chapel. In fact, he even refused, but in the end he succumbed to the desire of an insistent pontiff Julius II who was nicknamed the Warrior Pope and even the Terrible for a reason. When he was commissioned, or sentenced, he was 33 years old and already a consecrated artist whose contemporaries called him the Divine. With this, almost everything is said. Works such as the Vatican Pietà or the Florence David spoke for him. That is, sculptural works. And it is that Michelangelo considered himself above all sculptors, and fresco painting was not then among his undeniable virtues.

Perhaps as an act of rebellion or simply because it was as brilliant as it seemed, the nine scenes of Genesis in the famous vault do not fully correspond to traditional Catholic iconography and even today experts believe they have discovered messages, most of them humanist or heretical, that hid in the very heart of the Vatican.

One of these winks is found precisely in one of the central images, the one that shows the creation of Adam. To begin with, he painted an aged God, similar to the patriarchs of the Church, when until then he used to represent himself with the face of Jesus as the image of the Father. And close, dressed only in a pink tunic whose gesture seeks to approach his creation, man, and not the other way around.

Also quite innovative is the way in which the Creator brings Adam to life, both almost on the same level. There are those who want to see in this a message that would be very much in keeping with Michelangelo: God used the clay and those hands that he now extends to model, sculpt, man, to whom he transmits with that extended finger the creative capacity while lying on the same earth. that you used to create it and that now belongs to you.

Too bad the Neoplatonist Michelangelo did not write down in an artist's book all the symbolism of the immense fresco of biblical proportions, about 460 square meters painted 20 meters above the ground. This would put an end to theories, some very convincing, and move on to certainties.

In the absence of this, one of the hypotheses that has made the most fortune focuses on the shape of the mantle that surrounds God and the figures that accompany him. A doctor, observing the scene, realized that all that set of clothes and bodies was very familiar to him. Specifically, he thought he saw the image of a human brain and in 1990 he published the findings of his study in the Journal of the American Medical Association.

Dr. Frank Lynn Meshberger convincingly argued that Michelangelo had illustrated the anatomy of a section of the human brain, and not just its outline, but both the inner and outer surfaces, with clearly identifiable elements such as the frontal lobe, cerebellum, or the optic chiasm.

It should be remembered that a very young Michelangelo lived for a long time in the Florentine monastery of Santo Spirito to dissect the corpses in the morgue and thus discover every last muscle of the human body, not forgetting its internal organs. After the apprenticeship, he presented the abbot with a delicate crucified Christ (whose model was a deceased adolescent) to thank him for the welcome and the risk that the religious had taken for him. At that time, this type of autopsy was totally prohibited, although it was quite common among artists.

Years after the publication of Dr. Meshberger's theory, other doctors, in this case the neuroanatomists Ian Suk and Rafael Tamargo, published a second study in the journal Neurosurgery that went even further. According to these scientists, the possible errors detected in the treatment of shadows, falling clothes and even some anatomical anomaly in the neck of God, detected by art historians, would actually be resources used by Michelangelo to represent the spinal cord in a camouflaged way. human ascending to the brain.

If true, what did Michelangelo intend with it? The hypotheses continue: Did he want to demonstrate to what extent he was knowledgeable about human anatomy or perhaps he sought to highlight the importance of the brain, of intelligence, as the engine of creation, a divine quality that the Creator bequeathed to the human being and that brings us closer to him? ?