In his lifetime, Nibal Carracci (1560-1609) was compared to Michelangelo and Raphael, and was Caravaggio's only serious rival in Rome. 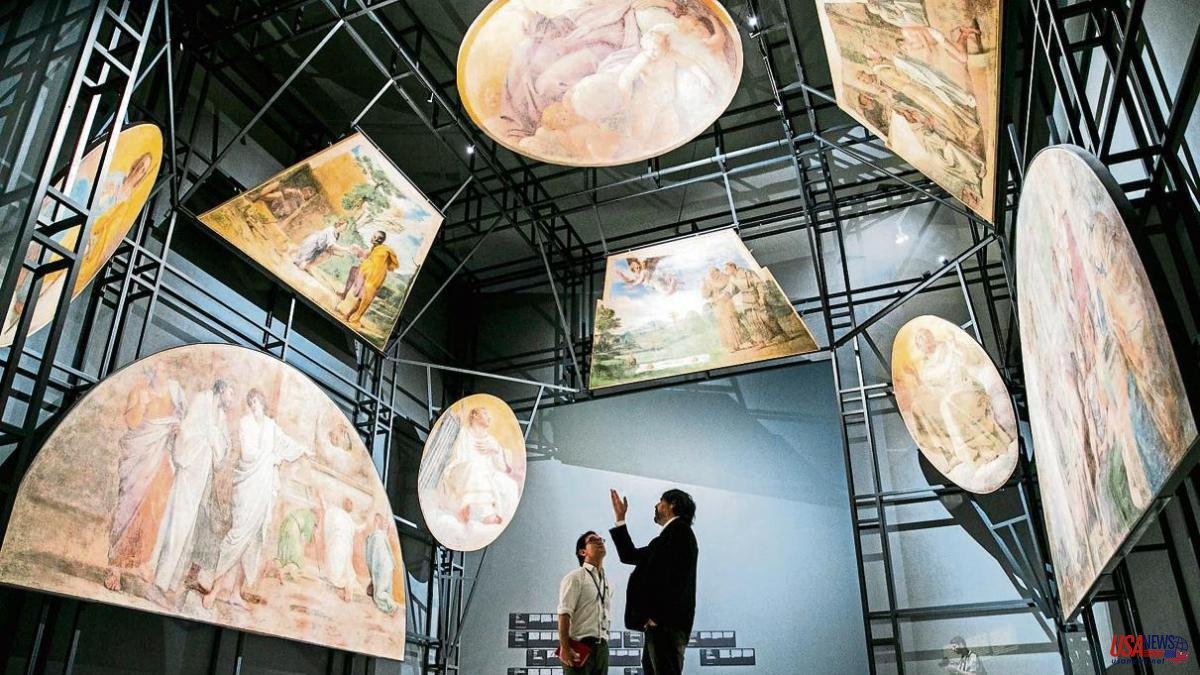 In his lifetime, Nibal Carracci (1560-1609) was compared to Michelangelo and Raphael, and was Caravaggio's only serious rival in Rome. But as so often with old masters, he fell dramatically out of fashion and his star did not re-emerge until the 20th century; nowadays no one disputes his status as a great figure of the baroque. What is not so common is that an important body of work by an artist of his relevance, in this case the frescoes he made for the Herrera Chapel in the Spanish Church in Rome, disappear for centuries and that even great scholars like the New Yorker Donald Posner, they were considered unrecoverable in 1971, lamenting that the final chapter of his career would never be known. But there they are again, happily reunited at the MNAC, for the first time they were uprooted in 1830.

The history of the paintings that the banker from Palencia Juan Enríquez de Herrera commissioned from Anibal Carracci after the healing of his sick son, is both miraculous and detective. A plot that Andrés Úbeda, curator of the exhibition and deputy director of the Prado Museum –where it was already presented last March– has taken several years to unravel and in which there are still some dark areas. Herrera entrusted the commission to Carracci, surely advised by one of his main clients, the Farnese family, for whose palace the artist from Bologna and his brother Agostino created a cycle of frescoes that were praised with the same enthusiasm that Raphael's work aroused in The Vatican. The banker chose the church of Santiago de los Españoles in the middle of Piazza Navona in Rome and wanted to dedicate it to San Diego de Alcalá, to whom he had prayed for the healing of his son.

After centuries of decline of what was the church of the Crown of Castile in the papal city, the frescoes were removed in 1833 and taken to Spain in 1850, from the port of Civitavecchia to Barcelona. "Queen Elizabeth II gave the paintings to the Royal Catalan Academy of Fine Arts of Sant Jordi by royal order, but without knowing how or why only nine of them stayed here while seven, the smaller ones, traveled to Madrid" , remember Ubeda. Four other frescoes went to the church of the Crown of Aragon in Rome, that of Santa María de Montserrat, of which three are missing.

In its presentation to the press, Úbeda tries to answer a single question: why is it such an important complex. And the reasons are multiple. From the numerous references made in the Rome of his time, all of them praising, to the fact that they are exponents of a revolutionary moment in painting - "there have been artistic revolutions at all times, not just in the avant-garde," he notes. the curator- of painting promoted by a generation of young artists including Carracci himself, who, dissatisfied with the mannerist preciousness that dominated the art of his time, advocated going out again to paint from nature and life drawing with model.

The frescoes have been restored in the workshops of the MNAC and the Prado, which from now on will return them to its permanent collection. Unlike its presentation in Madrid –it will later travel to the Palazzo Barberini in Rome– the group is presented at the MNAC with an architectural montage that recreates the original decoration of the chapel by placing the frescoes at different heights. The exhibition, inside the Renaissance and Baroque rooms -although with its own entrance from the Sala Oval-, includes the introduction of a large painting by Gaspar van Wittel on loan from the Thyssen showing Piazza Navona in 1699-, and It is completed with the artist's preparatory drawings, some of them from the private collection of Queen Elizabeth II of England.

Carracci, who suffered from a chronic illness, had his last crisis while painting the chapel, for which he had to hand over the direction of the project to Francesco Albani, with whom he had collaborated from the beginning. The banker, knowing that the frescoes had not left his hand, felt betrayed and flew into a rage, but he had no reason to deceive, "the Carracci brothers worked like this, it did not matter who put the brush, they tried that between one and another will not notice the difference. They believed in it and they did it that way because they believed it. The important thing is the idea. And the idea was in Carracci's drawings”, concludes Úbeda.