Is it immoral to lie on the beach and be caressed by the sun in a country at war? Or is it an act of survival, of celebrating a life more precious than ever?. 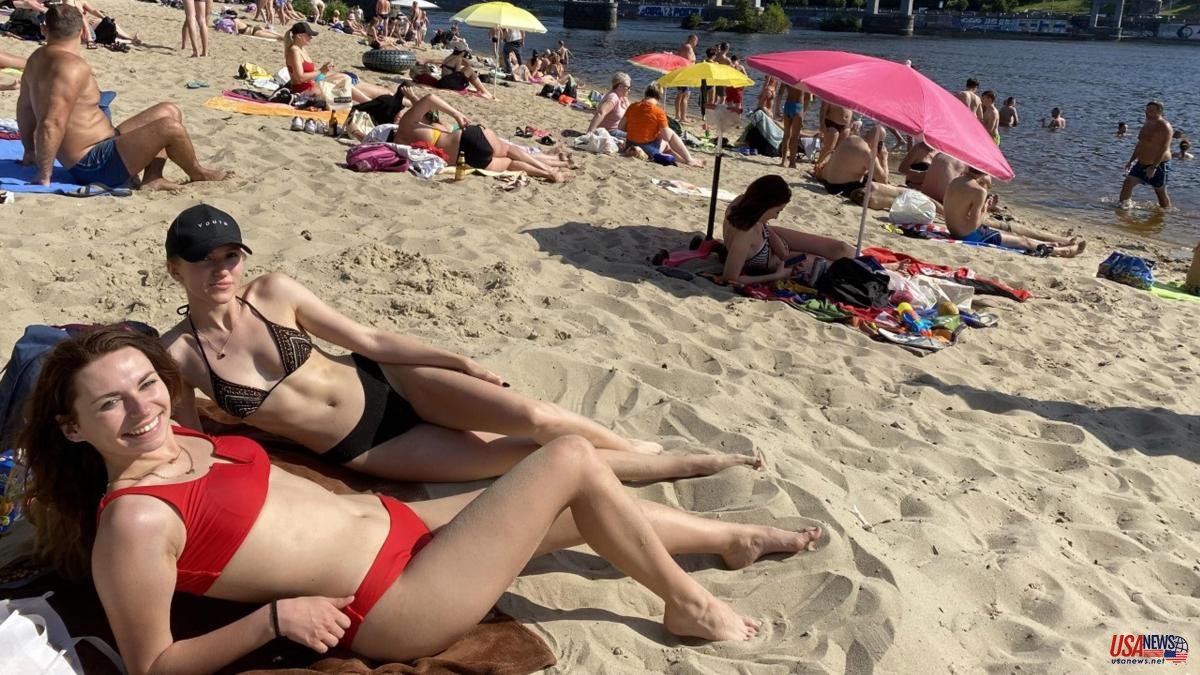 Is it immoral to lie on the beach and be caressed by the sun in a country at war? Or is it an act of survival, of celebrating a life more precious than ever?

Julia and Valeria, 21 and 20 years old, are clear about it and express it with disarming simplicity. “Ukrainians are a strong people. We are fighting to live. We want to do normal things because we don't know what will happen tomorrow”, says Julia. "To live. Even if it's just for one day," adds Valeria.

One red bikini, the other black, the two friends eat strawberries and cherries lying in the sun on Kyiv's Central Beach, on the banks of the Dnieper River. A child splashes on a huge inflatable doughnut, a fisherman casts his hook again and the back of a man taking a nap begins to show a purple hue. The thermometer shows 30ºC, the water sparkles and the war seems very, very far away.

When the Russian invasion began, at the end of February, a long military column was advancing towards Kyiv and the fall seemed imminent. It was not so. Fierce Ukrainian resistance forced Putin's troops to withdraw and rethink his strategy, concentrating the offensive in eastern and southern Ukraine.

With the fighting hundreds of miles away, normality is gradually returning to Kyiv, hastened by the arrival of good weather and long days, which always provoke an explosion of hedonism in countries with harsh winters.

War seems sometimes, even if only for a few moments, a mirage. But it is there. It is chewed on the armed soldiers that patrol the streets, on the sandbags that protect government buildings and monuments, on the curfew (from 11 p.m. to 5 a.m.) or on the anti-aircraft sirens that sound every time a rocket launch is detected. Russian missile somewhere in the territory.

The last missile to land on Kyiv was on June 5, the first in more than a month. It only caused material damage, as if what Putin really wanted was to remind the Kievites that they cannot live in peace.

“It makes me happy to see this beach full. Thank God, people have a place to go to relax, sunbathe and swim. We can't leave Kyiv, the Russians have mined everything,” says Natalia, a 65-year-old woman who has come with her daughter, Elena, and her granddaughter, Sofia.

“I have to say that in the center of Kyiv, where we live, we have hardly heard about the war. We have not gone down to the shelter once, ”says Elena, who quickly cuts off the conversation: she wants to sunbathe.

“The first month was very strange. Assimilate that you live in a country at war. Then you get used to it, ”admits Yevgenia, 37, as she queues to change into her swimsuit in a public changing room. She has spent the entire war in Kyiv, although she had her bags packed to go to Lviv, in the west of the country. "I don't have children, if I had I would have left."

He comes to take a dip. Alone. “My husband doesn't want to come to the beach. He doesn't feel well. I think we all, to a greater or lesser extent, feel guilty that we are here living our lives while so many people are dying,” he says.

Julia and Valeria celebrate that they have graduated (in Law and Economics, respectively). The war, they lament, has broken their plans for the future. But it has also made them see life differently. “We have spent the morning walking around Kyiv, taking videos and photos. Everything seemed so beautiful to us!” says Valeria. “Before we lived under stress. Because of work, studies, money –adds Julia–. A war makes you see that all that doesn't matter. Being here, enjoying the water, the sun, the trees... makes me happy”.