The harvest starts in Catalonia marked by drought and runaway costs

The first Catalan grapes of the 2022 vintage are starting to be harvested. 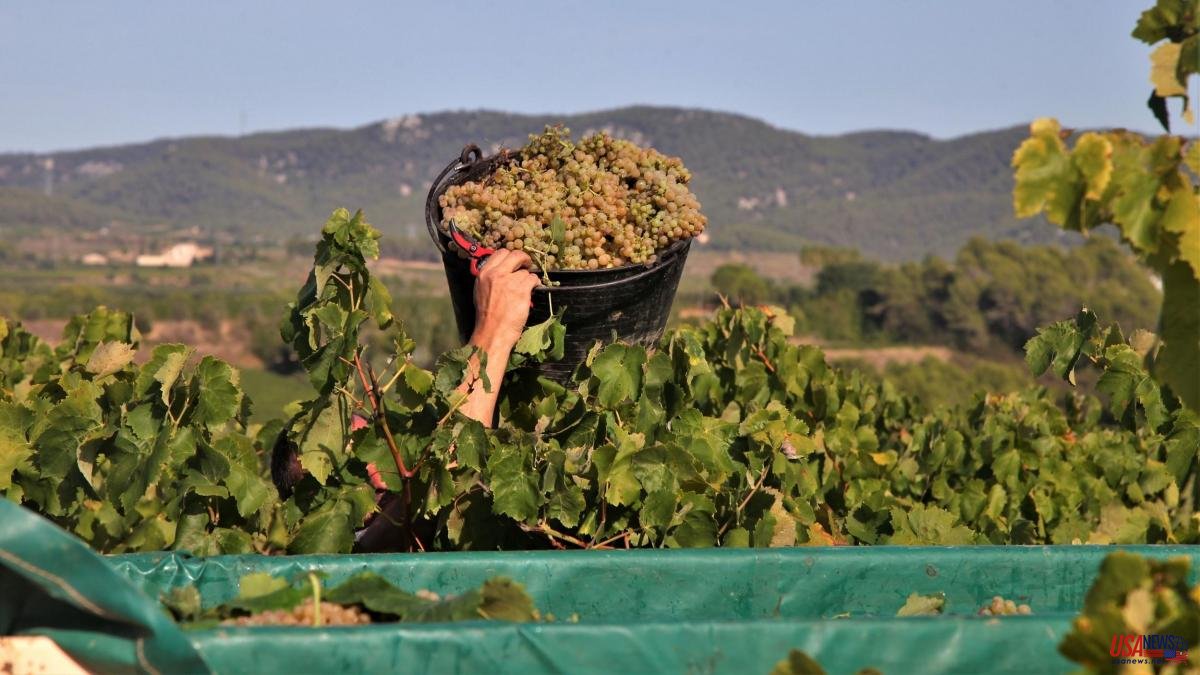 The first Catalan grapes of the 2022 vintage are starting to be harvested. Today Wednesday, the harvest begins in the Torre del Veguer winery in Sant Pere de Ribes (with the grano menudo muscatel for its sparkling Marta, a Penedès classic) or in Gramona, in Sant Sant Sadurní d'Anoia. In wineries such as Torelló de Gelida and Raimat it will start on August 3, and in Raventós and Blanc de Sant Sadurní d'Anoia from the 8th of next month.

It is a significantly shorter harvest than usual in terms of production. In the Penedès it is estimated that, if it does not rain, the drop in kilos will be around 30% lower, or even more, than the previous campaign. This could be the case especially with early varieties (such as Chardonnay or Pinot Noir for sparkling wines), in the case of clay soils and in young vineyards.

From the Catalan Institute of Vine and Wine (Incavi) of the Generalitat de Catalunya it is considered that the harvest is brought forward about 15 days, and that the reduction of the final volume could be around 15%. In some of the chardonnay parcels of the Avgvstvs Forvm winery in El Vendrell (Baix Penedès) production could drop by between 40 and 50%.

The harvest is marked by an unrepentant drought with up to three heat waves. The absence of rain - for many weeks not a single drop has fallen in most of the Catalan vineyards in the midst of successive heat waves - has advanced the ripening of the grapes. Of course, the health of the berries is remarkable due to the absence of humidity and fungal pests in all the Catalan varieties and denominations of origin (DO).

It is also a harvest marked by the increase in what the large DO Cava firms will pay per kilo of grapes, and by wild increases in production costs that have affected everything from diesel for agricultural machinery, phytosanitary treatments to the fertilizers Other costs that have skyrocketed in the sector are those for the purchase of glass bottles. Some wineries claim that they are venturing out to buy the bottles without knowing for sure what price they will be charged when they receive their orders.

The agrarian unions have celebrated the increases that will be paid for the grapes despite assuring that they are insufficient. Jaume Domènech, the sector manager for vineyards and wine at the Joves Agricultors i Ramaders de Catalunya (JARC) agricultural union, describes the increases that “the sector needs” as “very good news”. He adds, however, that "they are surely insufficient due to the cost increases that we are suffering". He also highlights that "there would never have been a need to go below 0.40 euros per kilo", and he trusts that "a new way of doing things that allows us all to move forward" has been started.

Josep Marrugat, the head of the vineyard and wine of Unió de Pagesos, applauds the increases which he interprets as "a first step to de-escalate the situation". The representative of the Penedès Winegrowers Association, Santi Vallès, hopes that organic grapes will be valued in a "fair proportion". He also acknowledges that "we are quite scared by the drought, which will lower the expectations of the expected harvest in a situation of low stock levels".

In the DO Cava, this campaign has set a maximum production of 12,000 kilos per hectare in the case of cavas from Guarda (11,000 last year), 10,000 for those from Guarda Superior -Reserva and Gran Reserva- and 8,000 for of Qualified Place.

Priorat has also experienced significant water stress. At the Álvaro Palacios de Gratallops winery, they estimate the start of the harvest on September 6. From the Mas Doix de Poboleda winery it has been lamented that "we have not had June, but an advanced July". The average temperature for the month was 25ºC (2.5ºC above normal) and the total rainfall was 15 liters (60% less than normal). To this must be added a month of May with an average temperature also located 2.5ºC above, and a very important accumulated drought throughout the year (35% less water than usual).

All this, with a July that is also very hot and dry, draws "a rather delicate situation". They do not lose hope that the summer storms "will give us some surprise and we will end up with enough water for the vines to work properly."

In the Empordà, the harvest also seems to be brought forward after a veraison that has arrived earlier than other years due to the high temperatures and the lack of rain. Production will be short. Faced with the effects of climate change, the Espelt winery states that "local varieties are more resilient to high temperatures, drought and wind." Therefore, it is added, “they are also the ones that with less effort will be able to live happily in our terroirs”.

In the Raimat area of ​​Costers del Segre, the harvest intended for the production of cavas could start on August 3, and in the Alta Alella winery (DO Alella and DO Cava) on August 8. In Terra Alta, the harvest is marked by an episode of torrential rain and hail that occurred at the beginning of July. It especially affected the municipal areas of Batea and Caseres, although there were also vineyards affected in the areas of Vilalba dels Arcs and La Pobla de Massaluca.

In total, according to DO Terra Alta, almost 3,000 hectares were damaged (500 hectares of vineyards, according to Incavi) by these storms that left rains of up to 80 liters per square meter in less than half an hour in some of the affected areas. In addition, the rains were accompanied by hail, which caused damage to the vines that can lead to production losses of up to 90% of the grapes.

According to JARC, the percentage of damage ranges between 25% and 100%, depending on the area. Under normal conditions, the insurance covers 45% of the production. However, this percentage will be reduced for many affected by Batea due to the penalty that two consecutive years of accident entails, given that in 2021 this municipality already suffered damage from hail and heavy downpours.

The union considers it necessary for producers to insure their crops, but calls for improvements in insurance conditions to "make it interesting for farmers." Of course, in Terra Alta, according to Incavi, a harvest close to or slightly above average is expected due to the good water reserves.