The great talents of the new golden generation of Spanish basketball 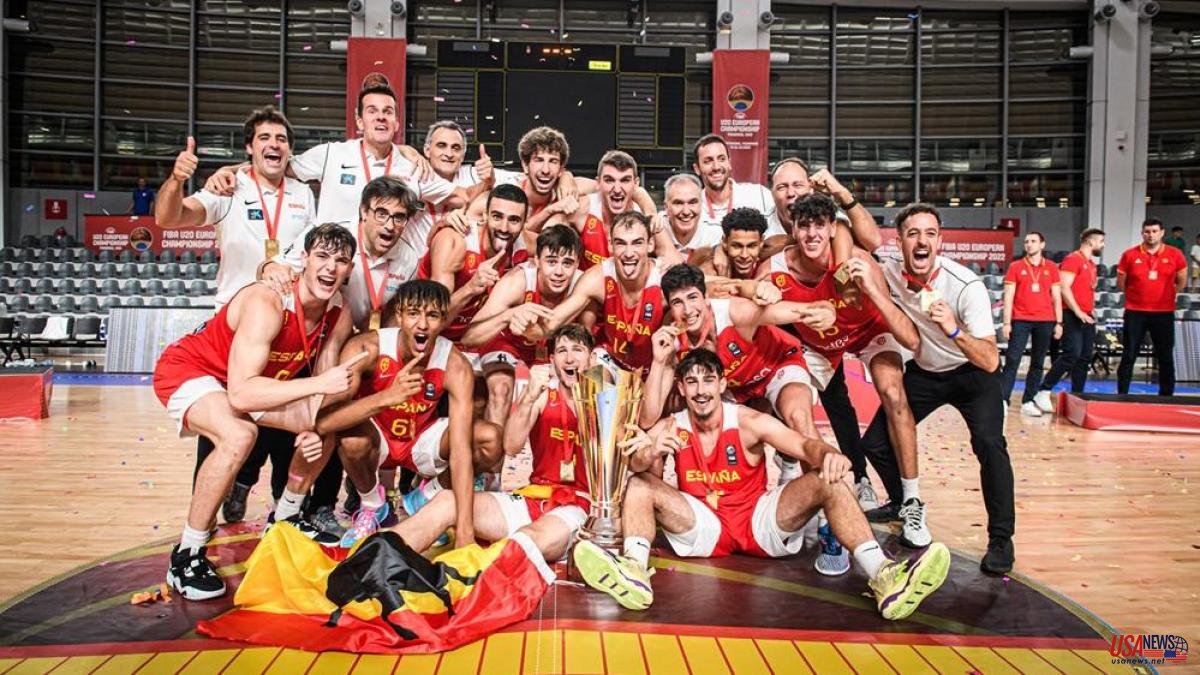 Spain reigns in Europe. Specifically, the youngsters of the Spanish under-20 basketball team, who last Sunday were crowned continental champions after beating the always tough Lithuania, one of the nations with the longest tradition in the sport, in the final (69-61). The road had begun as it ended, with a victory over the Lithuanians. The Czech Republic and Ukraine also succumbed to the might of Spain before the qualifiers, where Poland, Belgium and Israel then fell by the way to the final.

The coronation took place in Podgorica, the capital of Montenegro, and served for Spain to equal Serbia and Greece as the countries with the most European gold, three each. However, regularly no one approaches the Spanish. In addition to the three golds, in the U-20's record there are six silvers and seven bronzes. A total of sixteen continental medals that leave Lithuania and France light years away, with seven each.

This is a generation full of talent, that did not give up a single game in the entire competition and that is already showing its head at the highest level with some of the best teams in the country. The leader has been, paradoxically, the youngest in the squad, but also the brightest: Juan Núñez, Real Madrid guard, brand new MVP of the tournament and the only Spaniard in the ideal quintet. His name is already part of the history of the competition and follows in the footsteps of Ilyasova in 2006, Teodosic in 2007, Nikola Mirotic in 2011 or Osman in 2014.

At his side, the determination of Michael Caicedo in attack and defense, the scoring ability of Rubén Domínguez and Millán Jiménez or the interior dominance of Héctor Alderete elevated Spain to continental glory. Next, the players of this selection to take into account for the future.

The Real Madrid base has been the beacon of this team throughout the tournament. Despite being the youngest, at 18, he led the team's game and finished with a statistical line of 11.6 points, 4.9 assists and 3.9 rebounds per game. He was the second highest scorer for Spain and the fourth highest assist of the entire tournament.

Although a good final did not materialize, very erratic in shooting (11 points, 5 of 18 shooting), this success would be unthinkable without him. In the eighth and semifinals he had his best performances, both in the scoring section and in the organizer. The Whites' academy player already made his debut with the Real Madrid first team in June 2021, during the ACB playoff semifinals.

The FC Barcelona shooting guard is another of those who have already debuted in the elite, both in the ACB and in the Euroleague, being the fifth youngest to do so in the history of the Blaugrana club. His privileged physique (he is two meters tall) and his intensity on both sides of the court, as well as his ability to generate shooting situations, place him as one of the most prominent names on the team.

He averaged 9.4 points, 4.1 rebounds and 2.9 assists in the competition. In the final he was key, contributing 13 points with a 62.5% success rate. The Mallorcan has shown his projection with the Spain shirt, but he is also beginning to leave flashes with Barça in the biggest showcase of European basketball, the Euroleague.

The team's top scorer throughout the tournament was also in the final against Lithuania, with 17 points and 58.3% shooting from the field. He is one of the most precocious talents of this generation. A regular with the national team since he was 13 years old, he was chosen MVP of the 2019 Under-16 European Championship. In this championship he led Spain in attack, especially in the semifinal and in the final.

His average was 11.9 points, 3 rebounds and 1.7 assists. His function: besiege the rival basket from all positions. He shot 35 triples in the entire competition, more than anyone on his team, scoring 48.6% of them, a brilliant percentage. With the Movistar Estudiantes first team he debuted in 2020.

The other sniper from Spain. The Valencia Basket forward left a statistical line of 10 points, 2.4 rebounds and 2.3 assists throughout the tournament and was the team's second most three-pointer, a total of 31, with a hit of 51.6 %. With scorers of this level and efficiency it is much easier to resolve stuck situations.

The player from Calahorra accumulates 20 games in the national elite with the Valencian team. Quick and intelligent to find favorable shooting situations, as well as vertical and aggressive when he looks for the rival zone and ring, he is an offensive insurance with a great projection in Spanish basketball.

At 2.03 meters tall, the power forward shows great ease and intelligence in capturing rebounds, the most of the entire team, with a total of 44. His rebounding average of 6.3 per game makes him the fourteenth highest capturer of the entire tournament. In the offensive section he also added his 6.7 points per game, standing out especially in the last game of the group stage against Ukraine, in which he scored 16.

At 20 years old, he has yet to make his debut with Estudiantes and was on loan from February until the end of the season at LEB Plata's Hestia Menorca. However, he is also a regular with Spain and was part of the best quintet of the 2018 Under-16 European Championship.

The reserve point guard, substitute for Núñez, had an important role in the performance of the national team throughout this European Championship. Another good outside shooter (12 of 28 three-pointers in total), he did not have his best day in the final against Lithuania, in which he could only score two points in 19 minutes. However, he more than complied in the rest of the games, especially in the qualifiers, exceeding double figures in scoring in all of them.

At 1.84 meters tall, the "little" Valencia Basket point guard has played 24 games in the Endesa League, 22 of them last season. Seventh highest assistant in the European Championship with four per game, with Valencia he has already shown his great handling of the ball and his vision to find teammates in advantageous positions.

Another great of the selection, even more than Alderete. His 2.08 meter height makes him one of the most intimidating players on the national team. He made three important blocks in the final against Lithuania and also had remarkable offensive performances against Ukraine (16 points) and Poland (11 points).

The center from Bilbao is a pure inside player, who is not often seen outside the area, although he also shows dynamism and quick feet. He has recently said goodbye to Casademont Zaragoza, on his way to the Gran Canaria subsidiary, which currently plays in LEB Plata.