The great challenge of the Barça, the exits

If Barça were an American football team, taking advantage of the fact that it is on tour in the United States, the squad it currently has, discarded included, would be perfect for it. 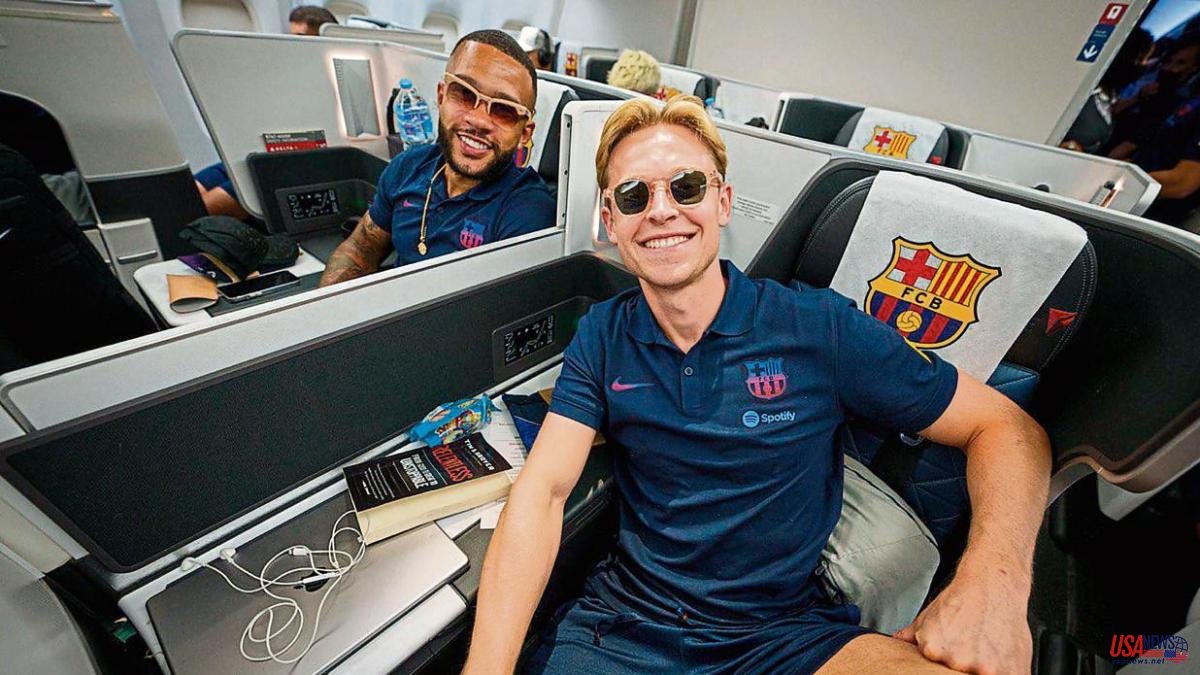 If Barça were an American football team, taking advantage of the fact that it is on tour in the United States, the squad it currently has, discarded included, would be perfect for it. As far as number is concerned. Because the Barcelona team, which is becoming one of the great protagonists of the summer market in terms of transfers, now has 30 players, with the last one to join the cause, Jules Koundé, and without adding to this relationship to young soccer players like Balde, Abde or Pablo Torre, incorporated for the subsidiary although with dynamics of the first team. Barça urgently needs to slim down its squad for two reasons.

The first and, the most important, to reduce his skyrocketing wage bill and be able to abide by the financial fair play rules of LaLiga, an essential condition to be able to register the signings, the re-signed Dembélé and the renewed Sergi Roberto. If it is not achieved in this way, the club will have to generate new income to be able to register its reinforcements, that is, activate a third economic lever and get rid of more future resources by charging them in advance. The idea of ​​​​the club is to prioritize the route of exits for the moment and reduce the wage bill from 560 million to about 400.

Among the footballers who can say goodbye to Barcelona there are two types. The one of those discarded and the one of those who are working under Xavi in ​​the United States with the pressure of the club to lower their salary or find accommodation in another team leaving good money in the box.

Neto, Mingueza, Riqui Puig, Braithwaite and Umtiti continue to exercise at the sports city of Sant Joan Despí and Xavi has already made it clear once again that they have no chance of playing under him this season. Neto and Mingueza seem to be the closest to arriving at another destination. The goalkeeper has an offer from Napoli while the defender has aroused the interest of Celta, which is very short of troops a few days before the season starts. The Blaugrana, the Celtiña and the central team are very close to signing an agreement.

Riqui Puig has it more raw at the moment. The one who was a great promise of the Barcelona youth academy continues without resolving his future, despite the fact that he has known since May that he has to leave Barcelona if he wants to try to play. Celta and Betis asked about him but nothing concrete is in sight on the immediate horizon.

The same goes for Martin Braithwaite, who was injured for much of the previous season. Valencia asked about him and there was also speculation about an alleged interest from Getafe, now that Ramon Planes, the man who signed him for Barcelona, ​​is on his coaching staff. As for Umtiti, the doubts that have existed for seasons about the state of his knee make it very difficult for him to leave Barcelona. The Frenchman has a contract until 2026.

The link with Memphis, who signed until June 2023, ends before. The Dutchman has seen increased competition up front with the recovery of Ansu and the arrivals of Rapinha and Lewandowski. They have already told him that it will be difficult for him to play regularly. His poster is good and Barça would be delighted to earn good dividends for a footballer who, incidentally, would release the number 9 for the Polish striker. More pressure, for months, has put Barcelona on the shoulders of Frenkie de Jong.

First wielding the offer from Manchester United and now trying to lower his high salary without ruling out a transfer in the remainder of the market. For now, only Lenglet (Tottenham) and Trincão (Sporting de Portugal) have left the club.

Barça continues to draw itself, especially for what it does to arrivals. In principle, that of Koundé will not be the last incorporation of Barça, who wants to reinforce the defense with two full-backs. Azpilicueta, for whom the negotiation is more advanced, and Marcos Alonso are the preferred candidates. They both belong to Chelsea.