The Government has today approved the decree law with which it intends to cover the directors and teachers of schools. 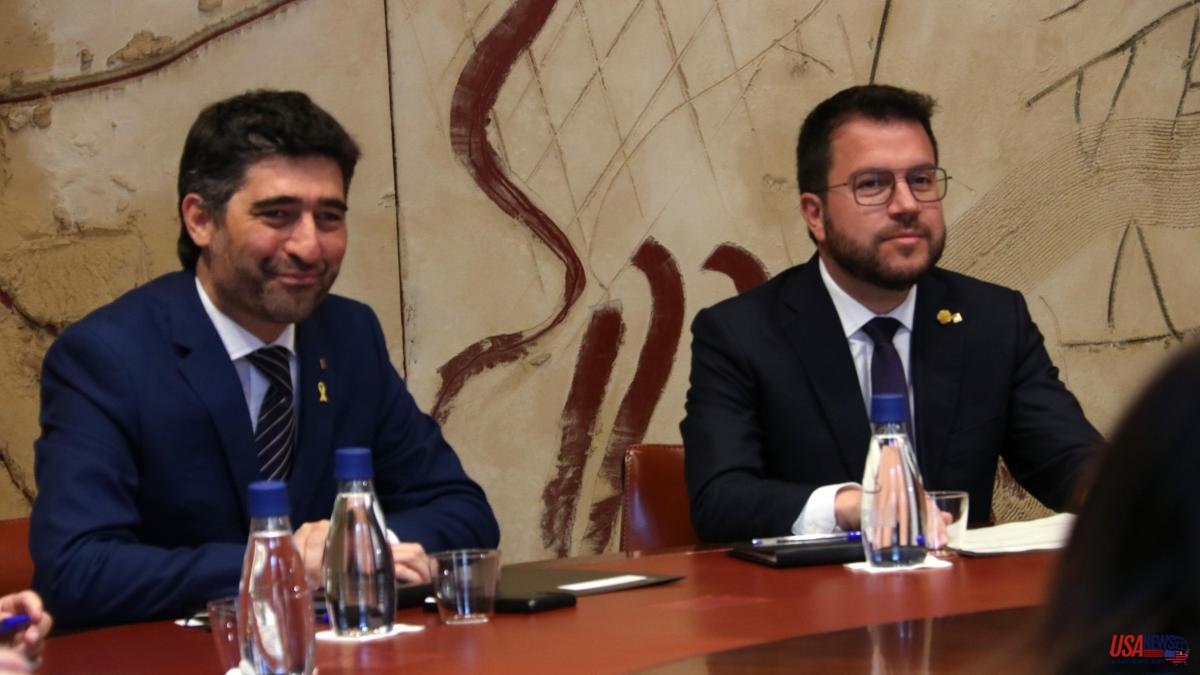 The Government has today approved the decree law with which it intends to cover the directors and teachers of schools. It does so outside the planned plan, since the Catalan Executive wanted to carry it forward shortly after the parliamentary law that the PSC, Esquerra, Junts and the commons have drawn up, but a request for an opinion from the Consell de Garanties Estatutàries has delayed its approval in the full. In any case, the two measures are complementary and their purpose is to establish a new regulatory framework that allows overcoming the ruling of the Superior Court of Justice of Catalonia (TSJC), which orders the Generalitat to apply 25% of classes in Spanish in the classrooms before May 31. Thus, with the premise that Catalan is the vehicular language, the text approved today by the Government stands out for two facts: first, it rejects black on white the application of percentages in the use of languages, and, second, it declares as responsible to the Department of Education of all the linguistic projects presented by each of the Catalan educational centres.

"The organization of the teaching and use of languages ​​in educational centers (...) is based on (...) the non-application of numerical parameters, proportions or percentages in the teaching and use of languages", says the text, already advanced by La Vanguardia a week ago. The Government thus intends to shield Catalan in schools. But at this point, it goes beyond what is stated in the Parliamentary law pending approval, which, although it indicates Catalan as the vehicular language and Spanish as the curricular language, does not make this rejection of quotas explicit. For this reason, the Socialists will not support this decree law, but they will support the Parliament's norm.

The spokeswoman for the Government, Patrícia Plaja, has assured that with today's decree Catalan is protected, "an answer is given to the sentence" and it is possible to "overcome a judicialization that was not desired by this Government, nor by the group of educational centers and fathers and mothers in Catalonia”. However, she has not dared to assert that she leaves the execution order and the 25% sentence on dead paper. Even so, she has affirmed that with this initiative the Generalitat will guarantee that "judicial interference motivated by ideological persecution", as is the case, as she has said of that ruling, "does not affect the proper functioning of education".

The decree law, signed by Pere Aragonès and the Minister of Education, Josep Gonzàlez-Cambray, will be in force just when it is published in the Official Gazette of the Generalitat de Catalunya (DOGC), "no later than midnight", he clarified Beach. Its necessary validation in the Parliament before 30 days will presumably have the endorsement, in addition to the one of Esquerra and Junts like partners in the Government, of the commons. The government spokeswoman, however, has limited herself to emphasizing that work is being done to ensure that the rule has sufficient endorsements in the Catalan Chamber.

The other touchstone of the decree is in the linguistic projects. The text states that "public schools and private schools supported by public funds have to develop a linguistic project that frames the treatment of languages ​​in the center, with the content provided by law, through educational strategies and adequate teaching resources to achieve globally the linguistic competences foreseen in the applicable regulations following the criteria established for the department in matters of education”. In addition, it ensures that these linguistic projects must "take into account the educational needs and the cultural and linguistic diversity of the students in order to achieve the objectives of linguistic normalization."

The Department of Education will be responsible for all of them. Linguistic projects must be validated by this department "in a period not exceeding 30 days", which must ensure that they comply with current regulations and "urge the modification if not". The schools will have to adapt their project "in the shortest possible time (...) generally within the first six months" of the 2022-2023 academic year. In fact, the Government emphasizes that these linguistic projects will be applicable from the start of the new course, and not from May 31, as required by the TSJC.

The decree is launched after the bickering between Esquerra and JxCat. In this sense, the spokesman and vice-president of Junts, Josep Rius, pointed out in a press conference that without the presence of his formation in the Catalan Executive, the decree would not have been approved. "Confrontation against unfair judicial decisions. If Junts were not in the Government today, this decree would not be approved to face the sentence," summarized the leader of JxCat. He has highlighted that this measure "protects teachers and foresees the explicit rejection of quotas in education", which he has described as "pedagogically aberrant".

To validate the decree in the Parliament, the training of Jéssica Albiach will be essential since the Socialists, the other party that completes the consensus around the law of linguistic uses in the classroom, is not willing to cast their votes. The commons have already hinted that the Government can count on them and, as parliamentary spokesman David Cid has explained, they have already been exchanging views with the Catalan Executive throughout the weekend. Even so, Cid was cautious at a press conference by not wanting to anticipate whether his party will support the decree until its exact content is seen, and he wanted to emphasize the norm that the four parties will approve in Parliament, a "very solid" law and robust", he assessed.

Instead, the Socialists have completely distanced themselves from the government initiative, warning that they will not support it if it is intended to "avoid or fail to comply" with the rulings of the TSJC. The Socialists did not know the content of the decree until the Government has approved it and they only had a previous draft from a week ago because this route was never of their interest. The PSC focused on carrying out an agreement on the new law because they are not willing to support a measure that, in their opinion, poses a challenge to the TSJC when it specifically states that linguistic percentages should not be implemented in the classrooms.

Even without knowing the content of the decree, for those of Salvador Illa, this measure is nothing more than an "improvisation" as a result of nervousness because the deadline to comply with the sentence ends this Tuesday and they insist that "the sentences must be fulfilled, like Or don't like it." In any case, socialist sources see it possible that there will end up being a vote by parts of the decree in the Catalan Chamber that would allow them to distance themselves from the part in which the percentages are rejected and validate the rest of the text.