The German NGO Mission Lifeline is repairing its boat in Arenys de Mar.

Over the last four months, Arenys de Mar (Maresme) has become the second residence of a group of young volunteers who repair and fine-tune the Rise Above ship of the German NGO Mission Lifeline. 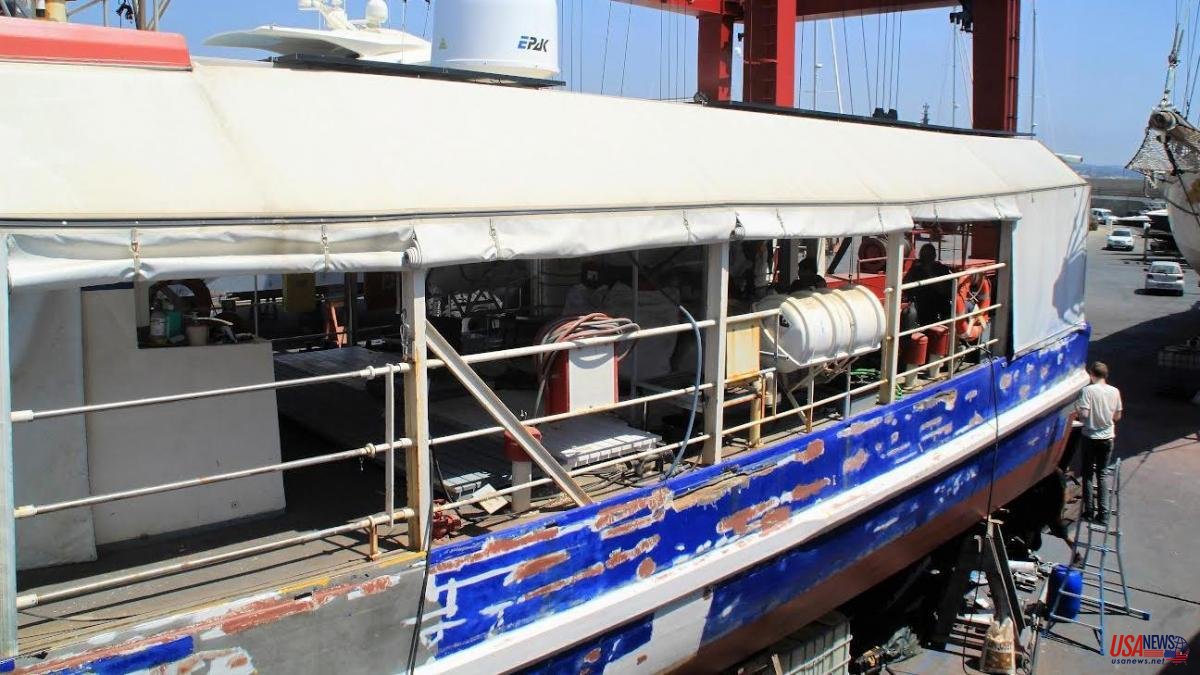 Over the last four months, Arenys de Mar (Maresme) has become the second residence of a group of young volunteers who repair and fine-tune the Rise Above ship of the German NGO Mission Lifeline. The group, made up of boys and girls, works during the day at the Varador 2000 shipyard and rests at night in various apartments they have rented in the town. All, without exception, work a full day, since at the end of June the boat must be fully operational to carry out new rescues of people from Africa in the Mediterranean.

The shore team that works on the repair of the ship is made up of specialists in various disciplines. “We have a bit of everything, carpenters, welders, polishers, electricians, mechanics, etc. that make it easier to deal with the multiple repairs that we have to carry out on the ship”, says Jan Rosiwal, technical director of Rise Above, who coordinates all the work and the human team. Where the group of volunteers cannot arrive, the technical personnel of Varador 2000 arrive. Sources close to the shipyard point out that the company has also made a great economic effort to facilitate the stay of the vessel in its facilities, providing spaces, technical logistics and professionals at prices far removed from the general rates.

In addition to the economic factor, the strategic position of Arenys de Mar has also been decisive in undertaking the repair of the ship on the Catalan coast and not in Sicily, where the ship has its base of operations. According to Rosiwal, “the logistical facilities that this enclave offers us are very good. It is a very well connected site, which enables the mobility of our volunteers and that we can easily receive the materials and spare parts that are sent to us from Germany”. Mission Lifeline, which is based in Dresden, knows the Arenys shipyard very well, where it already repaired one of its first rescue ships, the Eleonore, some time ago. "At Varador 2000 we are very comfortable, they have a good space, good professionals and a travelift (crane) with enough capacity to lift and move our boats," says Rosiwal.

The Rise Above is a ship from the 60s of the last century. She is an old ship, with a wooden hull, which requires a lot of maintenance. Her technical manager explains that over the years she has undergone many transformations, especially since she acquired it from the NGO to dedicate it to rescuing people. During their stays on land, such as this one in Arenys de Mar, "in addition to repairing the damage caused by age and use, we also have to improve the spaces and utilities of the ship to adapt them to the specific needs of rescues at sea ”. Maintenance work is essential for the ship to adequately carry out its humanitarian mission. Currently, between 10 and 15 volunteers work steadily at Rise Above. This ground crew is not embarked.

The rescue missions on the high seas are carried out with another team of volunteers, a crew of nine people, among whom there are always medical personnel. Mission Lifeline has been operating at sea since 2016. Since then it has rescued thousands of people with its boats. The first two, Lifeline and Eleonore, "were sold because they were blocked in a port," says Jan Rosiwal, who has been working for the NGO for a year.

This organization currently has two other ships in operation, the Rise Above, which operates in the Mediterranean, and the Marwa, which operates in the Atlantic, in the Canary Islands area. The latter has several drones that facilitate sightings of canoes. The Rise Above, on the other hand, receives notifications of sightings of small boats through various channels: maritime rescue, other NGOs, or large transport ships that have come across drifting boats during their journey.

When it departs from Arenys de Mar, the Rise Above will immediately resume its humanitarian missions in the Mediterranean. “During the summer – comments Rosiwal – there are many more small boats that try to reach Europe and therefore the number of people who put their lives at risk multiplies. Fortunately – he adds – the weather is more benign than in autumn and winter, when the danger of dying at sea is much higher”. This Mission Lifeline volunteer, who also plans to join rescue teams in the future, says he is fed up with hearing accusations implicating his organization and other NGOs in human trafficking. "We - he affirms exhaustively - only rescue people fleeing poverty, wars or political persecution in search of a better life, we limit ourselves to carrying out humanitarian work".