The literary apprenticeships of Camilo José Cela (1916-2002) are as a poet; that was his youthful will, fascinated by Rafael Alberti (About the Angels), Vicente Aleixandre (The Destruction or Love) and, above all, by Pablo Neruda (Residence on Earth), and guided by the continuous dialogue with Lolita Franco ( 1912-1977), the future wife of Julián Marías, in the context of the Madrid Faculty of Philosophy and Letters, in which she passionately followed Pedro Salinas's classes, hidden from her parents. 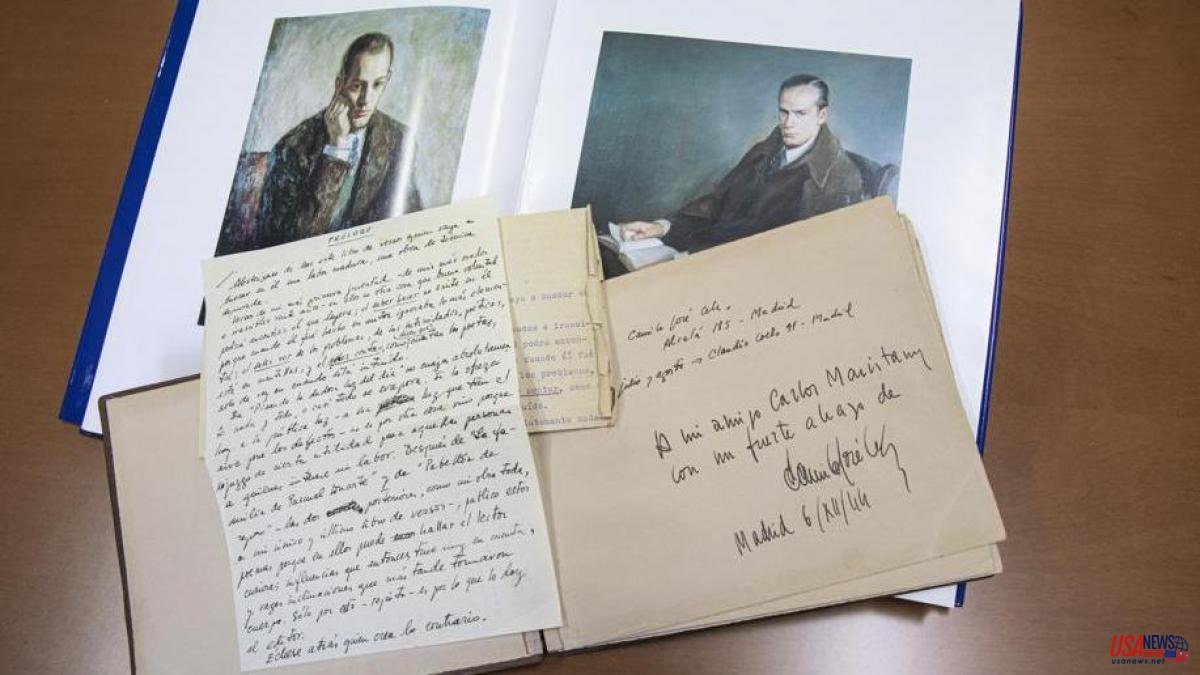 The literary apprenticeships of Camilo José Cela (1916-2002) are as a poet; that was his youthful will, fascinated by Rafael Alberti (About the Angels), Vicente Aleixandre (The Destruction or Love) and, above all, by Pablo Neruda (Residence on Earth), and guided by the continuous dialogue with Lolita Franco ( 1912-1977), the future wife of Julián Marías, in the context of the Madrid Faculty of Philosophy and Letters, in which she passionately followed Pedro Salinas's classes, hidden from her parents.

Shortly after the war broke out and during the first coup siege of Madrid in the fall of 1936, he wrote the collection of poems Pisando la dubious luz del día, in which, as he acknowledged to Marino Gómez Santos in an interview in 1957, “The influence of Neruda in my first book, a book of verses that I titled Treading the dubious light of day is manifest. I'm not sorry about that, but proud."

On February 2, 1937, Lolita Franco wrote to him: “I am happy that you have made a book. You have creative illusion, right? One day you will make all those poems known to me.” Cela immediately sends him the "Hymn to death", the long poem that closes the book. Lolita reads it “dragged by the verse” and defines it –a definition that suits the entire work– as “a state of consciousness of sleepless and nightmarish night, of being sunk in the subconscious, without day”.

A few months later, taking advantage of the good relationship he had with Marcos Fingerit (1904-1979), director of Fábula. Revista de Letras y Artes (La Plata), thanks to Luis Enrique Délano (1907-1985), the Chilean writer and diplomat who had introduced him to Gabriela Mistral and Pablo Neruda, publishes the final song of the “Hymn to Death” in the March 38 issue of La Plata magazine.

From then until 1944 we hardly knew anything about the first unborn book of a writer who had wanted to be a poet, except for the presence, while Pisando en Barcelona was being developed, of the final fragment of the "Hymn to Death" and the poem "Adonic Transit" in the Garcilaso magazine, where it was intended to link –a difficult task– with the poetic stage as it had been in 1936.

In 2008, in the elegant collection from Ourense “Linteo Poesía”, I published, in collaboration with Professor Marta Cristina, a philological edition as neat as possible of the first edition of Pisando la dubious luz del día. Poems of a cruel adolescence (Barcelona, ​​Editions of the Zodiac, 1945).

For this purpose, all the previous materials available to the Camilo José Cela Foundation (Iria Flavia) were consulted, but, despite the incomparable treasure of Celian manuscripts that it guards, it does not record the book of 45, which between Carlos F. Maristany (1913 -1985), owner and director of Ediciones del Zodíaco, and Camilo José Cela forged throughout 1944, in a very interesting adventure, accredited by their correspondence, which Professor Pilar Criado is finishing studying for her doctoral thesis.

Since 2008 I have not stopped searching for the manuscript, which had led to the extraordinary edition that Maristany prepared for many months, in continuous epistolary dialogue with Cela (they still did not know each other personally), until seeing the light on April 8, 1945.

The correspondence between the editor (who defined himself in the summer of 1944 as a fan of letters in a broad sense and a devotee of the philosophies of Unamuno and Ortega, to whom he hoped to one day make "a personal contribution") and the impetuous young Galician writer not only offers detailed and precise information on all the extremes of the composition of Pisando, but also guarantees that the manuscript used for the edition remained in the hands of Maristany.

In a letter dated December 6, 1944, when the editing process was practically finished and Cela had obtained the authorization from the censor and informed him that Leopoldo Panero's prologue had been sent, he wrote: "Here is my original signed for you, each which one has his things and if you like that pile of papers patiently copied by machine, who better could you give it to?

At last the manuscript has been found (a facsimile edition will soon see the light of day). It is a 17x21 cm notebook, which in landscape format brings together the typewritten texts of twelve poems, of which the princely edition suppresses, by Cela's preventive decision, "Announcement of a declaration of love", which was published as loose sheet in four copies of the 450 numbered copies of the first edition.

Cela had the manuscript prepared well before handing it over to Ediciones del Zodiaco, because its colophon humorously reads: “Ediciones de la Santa Paciencia, 1939”, which is naturally deleted from the edition. By hand, he proposes dedications and variants, while attaching the Dedication by hand and the Note by typewriter. He also deletes three paratexts.

The analysis of the dedications and the scores that are produced reveals how far-sighted Cela was in his strategies to move towards new horizons. In this sense, the figure of Gregorio Marañón takes on an important meaning.

For the history of Spanish literature in the 20th century, the discovery of the manuscript of Cela's first work is highly relevant news. Miss Maria Isabel Maristany, daughter of the great Barcelona publisher, has guarded it all this time. Thank you very much, in the name of philology.

Adolfo Sotelo Vázquez, professor of Spanish literature at the University of Barcelona, ​​is one of the leading experts on the work and figure of Camilo José Cela, to whom he has devoted numerous studies and monographs.