The final between Barça and Palma recovers the classic format

Barça starts this Tuesday the challenge of closing a brilliant season. 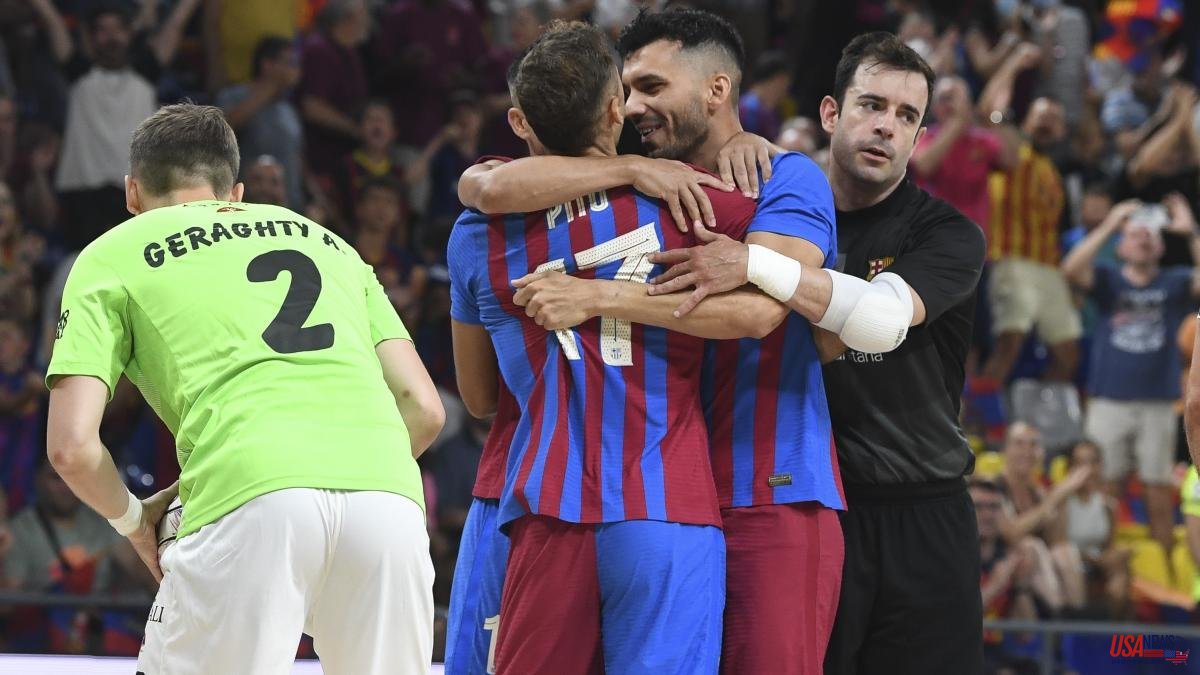 Barça starts this Tuesday the challenge of closing a brilliant season. The new faces on the track and on the bench have not been a brake on the Catalan team lifting three of the four titles played to date (Champions, Cup and Spanish Super Cup). The Blaugrana are the rival to beat and their duty is to compete to win everything. The last trophy he has left is the League.

The Palau Blaugrana will attend the first assault (8:45 pm / GOAL) against a team that was not among the candidates for the fight for victory. Palma Futsal is rewarded with an exceptional course with the possibility of winning, no matter how difficult it may seem. Antonio Vadillo's men are not satisfied with just having come this far and having qualified for the Champions League for the first time. They make their debut in a domestic championship final but their ambition pushes them to greater heights.

The theoretical Blaugrana favoritism is diluted when you take a look at the latest results. Those of Jesús Velasco know well that Palma is a hard bone. In the current season, Barça has lost its two league matches (6-2 and 1-3) and was only able to defeat the Balearic Islands on penalties in the Super Cup final. "If we manage to maintain our optimal level, we know that we are superior, but we have to prove it. It is a team that, due to the way they play, can hurt us and the precedents tell us so," warned the Blaugrana coach in the previous one.

Velasco accepts the role of his own and understands that the pressure falls on them, since in case of defeat they would be forced to win in Son Moix next Saturday. Unlike what has happened in the quarterfinals and semifinals, the final will not be a round trip, but rather they will recover the classic format of the competition. The team that wins the best of three games will be the champion. And Barça has the court factor. "Winning tomorrow (today) we will go to Palma calmly, knowing that they have all the pressure", he added.

Sergio Lozano pointed out that Palma has had "the best season in its history" and that they have "nothing to lose". That's why he doesn't trust. "Most considered them eliminated and they came back against Ribera and Jaén", said the Blaugrana captain about Palma, a competitive team, skilled and well covered under the sticks.

One of their goalkeepers is Fabio Alvira, who also spoke about the game and highlighted the enthusiasm of this modest squad. "We are going to play against the best team in the world, against the best players," he stressed. A "price to pay", as Velasco pointed out, since the Blaugrana players arrive "very crushed" at this end of the season after many games accumulated at club level, but also at national team level, with the Copa América and the World Cup played .

"We arrived at a good emotional and sporting moment and we will not be conformists. What we have experienced these days is very nice but it is over. It is what sport has," expressed his counterpart Vadillo in reference to the constant challenges. Both ElPozo in the quarterfinals (overtime) and Valdepeñas in the semis (matched until the last ten minutes) competed against an earthly Barça. Mallorcans will not want to be less.