The European Parliament awards the Sakharov Prize to the Ukrainian people

The Ukrainian people, represented by its president, Volodimir Zelenski, and by its leaders of civil society and resistance to the Russian invasion, received the Sakharov Prize for freedom of conscience, the highest award given by the European Union ( EU) in the field of human rights. 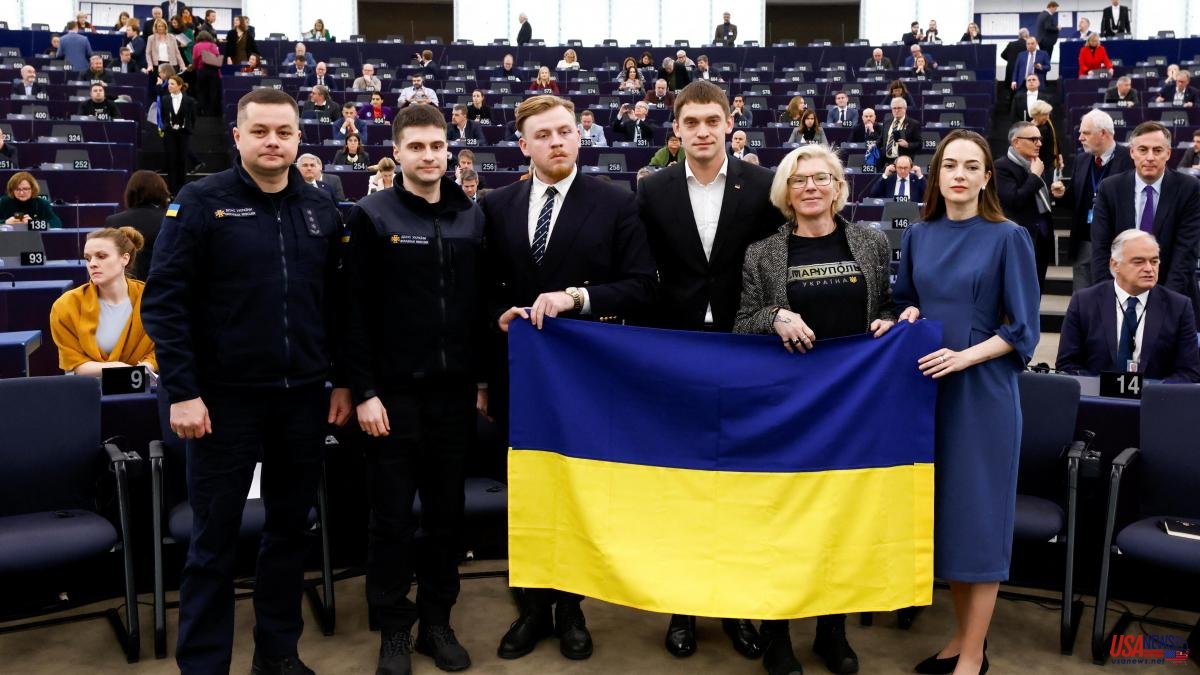 The Ukrainian people, represented by its president, Volodimir Zelenski, and by its leaders of civil society and resistance to the Russian invasion, received the Sakharov Prize for freedom of conscience, the highest award given by the European Union ( EU) in the field of human rights.

Zelenski himself connected by videoconference with the community chamber to personally thank the award and the efforts of the European Parliament and other European institutions in favor of establishing a special international court on aggression against Ukraine, on which the International Criminal Court has not has jurisdiction, to try Russian political and military leaders.

"It may be that only after the end of the war, when we liberate all our territory, we will find all the graves of terror. Only then will we be able to say how many lives the tyranny has devastated," lamented the Ukrainian president, who had already addressed the European Parliament a few days after the start of the war.

Zelenski, who thanked the award "on behalf of those who fight for Ukraine and freedom", considered it a "moral duty" to build a new security architecture "for global freedom and international law" that prevents a crime from ever happening again. of genocide against the Ukrainian people.

In addition, he considered that the type of court that can be created to judge Russian war crimes must be "permanent" in nature, so that "punishment for a criminal war is inevitable" and this discourages, in his opinion, the conflict.

The Ukrainian president led the deputies in an emotional minute of silence for the people who have lost their lives in the Russian invasion and remained on call to see the mayor of Melitopol, Ivan Fedorov, collect the award; the founder of the "Angeles de Taira" medical evacuation unit, Yulia Pajevska; and the director of the Center for Civil Liberties and co-winner of the Nobel Peace Prize, Oleksandra Matviychuk.

The prize, which since 1988 honors people and organizations that fight for freedom of conscience around the world, has been rewarding the opposition to Russia and its allies for three consecutive years in different formats: with recognition of the democratic opposition in Belarus in 2020 and the award to the imprisoned Russian opposition leader Alexéi Navalni in 2021.

"It was Andrei Sakharov himself who said that a country that does not respect the rights of its own citizens will not respect those of its neighbours", recalled the president of the European Parliament, Roberta Metsola, who thanked Ukraine for defending "the values ​​that in Europe we have had the luxury of taking it for granted.

"May the award serve as a reminder of our unwavering support and be dedicated to all the men and women on the ground, those we have welcomed into our homes and those who have lost friends and family. I know you will not give up and I assure you that we will not do it either," Metsola said.

In a subsequent press conference, the representatives who collected the award on behalf of the Ukrainian people insisted on the need for Europe to send more weapons to kyiv and to "break the circle of impunity" that Russia has enjoyed for years.

"There is no military objective in what Russia is doing against civilians. They only do these horrible things because they can. They want to break the resistance of the people and occupy Ukraine with the immense pain of civil society," said Matviychuk, whose NGO is spends touring the country to document Russian war crimes.

Pajevska, who said he represented the Ukrainian armed forces when collecting the award, in his capacity as a sergeant, assured that Europe "can always count on the support of Ukraine and our society if it ever finds itself in difficulties."

And the mayor of Melitopol, Ivan Fedorov, who has been in exile in Zaporizhia since he was deposed by the Russian occupying forces a few days after the start of the invasion, called for "more weapons" in order to defend his country "until the end." Today, the entire EU prepares for Christmas and the Ukrainians prepare for victory. While Christmas lights are lit in Europe, candles are lit in Ukraine because we don't have electricity. When we win, we will win together. If we lose, we will lose together because Ukraine defends your values," Fedorov said.