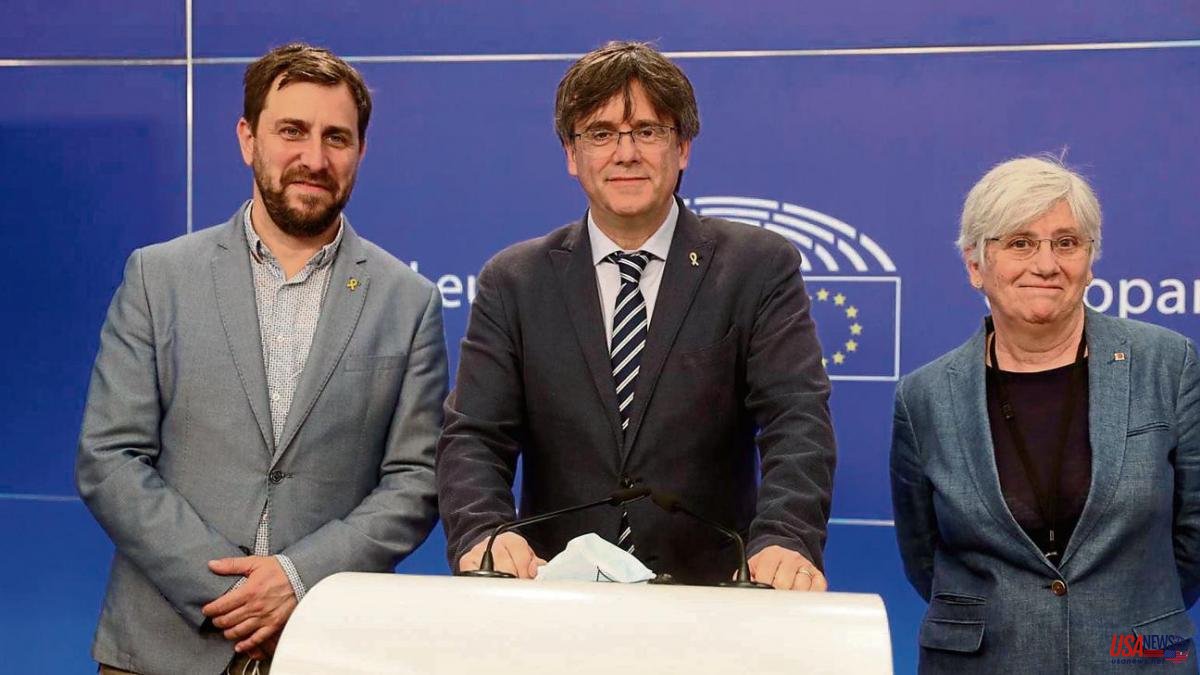 The vice president of the CJEU has accepted the precautionary measures requested by the three MEPs requesting that their immunity be restored because their granting is "justified" given that they run the risk of being arrested, as happened to Puigdemont in Sardinia (Italy) last September .

This pronouncement annuls a previous order of the General Court of the EU that dismissed precautionary measures for the three politicians, considering that there was no risk that they would be arrested while the merits of their appeal against the decision of the European Parliament to accept the petitions issued by Spanish Justice, given that the European Arrest and Surrender Orders issued against them are suspended throughout the EU.

This Tuesday's decision is precautionary, waiting for the CJEU to decide on the merits of the matter, that is, the appeal filed by Puigdemont, Comín and Ponsatí against Parliament's decision to withdraw their immunity for having approved the petition that has requested by the Spanish Supreme Court.

On May 26 of last year, the three pro-independence MEPs filed a request for provisional measures to restore their immunity in a precautionary manner, which the General Court of the EU accepted in a first decision of June 2, 2021, but revoked. later, on July 30, when they understood that they were not at risk of being arrested.

Puigdemont, Comín and Ponsatí appealed this last decision before the highest instance, the Court of Justice of the EU, which today, once again agreed with them, once again granting them provisional immunity.

In today's order, the vice-president of the CJEU underlines that the fact that the names of the three MEPs appear in the second-generation Schengen information system (SIS II) -the databases of the police forces- because they are in force the European orders against them "involves, by itself, the obligation to proceed with the arrest".

Therefore, the court continues, there is "a great probability that said person will be arrested", before the European justice decides whether or not Parliament correctly approved the request, withdrawing their immunity.

The order adds that "the requirement of urgency is also met", since it understands that "the deputies have demonstrated in a legally sufficient manner with a degree of probability that is also sufficient the predictability of their arrest and their surrender to the Spanish authorities if they are not suspends the execution of the decisions of Parliament by which his immunity was lifted".

Thirdly, the vice-president of the CJEU rejected the argument of the State Attorney that the Euroorders have been suspended until the CJEU decides on the preliminary ruling that the magistrate of the Supreme Court Pablo Llarena has raised to know to what extent the Belgian justice can question their competence to issue European orders.

There is still no date for the CJEU to issue its ruling on the two substantive issues that will mark Puigdemont's judicial future, the appeal against the decision of the European Parliament to lift their immunity and the preliminary ruling on Llarena.

However, the EU attorney general will rule on this last case on July 14, although his conclusions will not be binding, although they do tend to mark the final sentence.

In fact, in his decision this Tuesday, the vice-president of the CJEU points out that the "behavior" of the rapporteur on the petition, the ultra-conservative Bulgarian MEP Angel Dzhambazki, and of the president of the parliament's legal affairs committee "seem to demonstrate at first glance a taking a position or a personal prejudice contrary to the deputies". And he adds that "it cannot be excluded that the membership" of Dzhambazki to the same political group (ECR) in the European Parliament "in which European deputies of the political party that VOX are included, may raise legitimate doubts about a potential prejudice against the deputies" Puigdemont , Comin and Ponsati.