The Beach Boys delighted with their assorted catalog in a generous concert that served to revive the harmonic splendor of the quintessential sixties pop, although its protagonists, Mike Love, co-founder and lead singer, and keyboardist Bruce Johnston, in the group since 1965, already exceed 80 years of age. 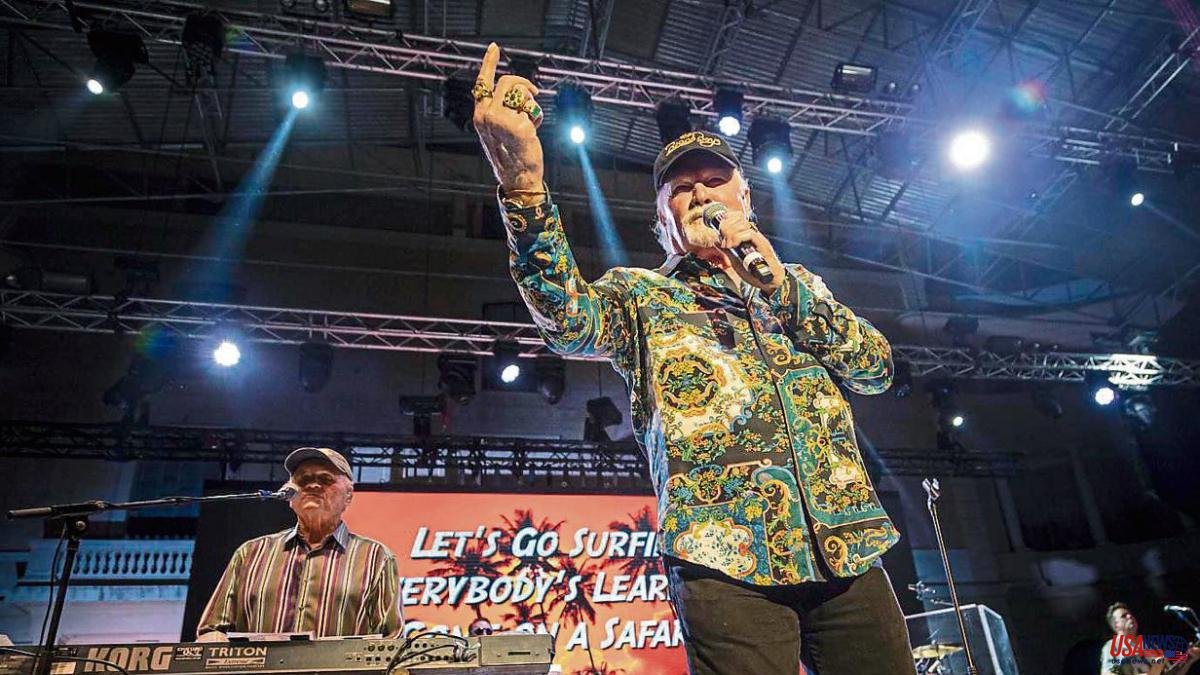 The Beach Boys delighted with their assorted catalog in a generous concert that served to revive the harmonic splendor of the quintessential sixties pop, although its protagonists, Mike Love, co-founder and lead singer, and keyboardist Bruce Johnston, in the group since 1965, already exceed 80 years of age. The seminals Brian Wilson and Al Jardine are not in the current line-up, nor are the late Carl and Dennis Wilson, but they are all constantly reminded with videos and footage that illustrate and fill the concert with nostalgia. The group's current tour, with the very appropriate name of "Sixty Years of the Sounds of Summer", is a show that has been touring the United States and Europe since March, whether in casinos, art centers, theaters, cruises, hotels of the Hard Rock chain, the Olympia room in Paris, the Royal Albert Hall in London or festivals.

And furthermore, not only are they limited to remembering their great hit factory, but, to make the name of the tour more real, they include versions of colleagues. Even if they are from later times, as is the case with the Ramones' “Rockaway Beach”. Another emotional moment is when Mick Love remembers his stay in India to meditate and the meeting with the Beatles, which ends with the rescue of the song "Pisces Brothers" and "Here comes de sun" by

George Harrison. Other significant covers are Chuck Berry's "Rock and roll music", "Do you wanna dance?" by Bobby Freeman and the essential “Barbara Ann” by The Regents. And what to say when his own jewels sound, all of them emblems of pop history, which help to install us in the imaginary of an eternal summer, full of sun, beaches and surfboards that ride inexhaustible waves. With their rich vocal harmonies they knew how to reflect the radiance of a time when everything was still possible. And where the octogenarian protagonists did not arrive, there were the guitarists of the band, with a voice that allowed them to reach the high tones to remember in conditions the happy sixties in technicolor and high fidelity.

They can proudly celebrate their sixty years in the entertainment business, becoming an emblem of pop, taking their immortal youth anthems all over the world, as long as their bodies endure, sure of a sound that has crossed generations. We say this in light of the public that filled the landscaped area, an amalgamation of classes and ages that showed how transversal The Beach Boys have become. Their songs really arouse good vibrations and although with age the register of the voice loses its nuances, they have learned the lesson very well and the new members of the band contribute instrumental solvency, in a nonet that moves according to the opinion of the musical director, guitarist and singer Scott Totten.

The Beach Boys performed for the first time in Spain in October 1990. The 2012 tour -which stopped at Poble Espanyol in a memorable concert- was the one that included the most original members, but Brian Wilson seemed in another world behind his white piano. Since then it has always been Mike Love who has held the reins, offering that infallible cocktail in which mixing doo wop and rock and roll obtain a genuine and sophisticated surf pop, in which the distinctive and precious vocal harmonies have a predominant role. They have been doing the same concert for many years but, far from being boring, every time they open their mouths the art of intangible wonders is activated.

And that from the initial “Do it again”, in an impressive set of songs that had its first climax with “Surfin' safari”, after having set the “mood” making us fly with his “Little Honda” and surf on top of the world with “Catch a wave”. Without giving pause, they shone in the sentimental and bittersweet tones of “Surfer girl” and in the soulful air of the heartfelt recreation of “Then I kissed her”. Celestial harmonies and forceful beat, in a magical formula in which his odes to cars were not lacking, with "Little Deuce Coupe" and "409", and whose most notorious aces were "Help me, Rhonda", the beautiful "God only knows”, rescued from his classic album “Pet sounds” and the lavish summit “Good vibrations”. There was also time to prove his skill with the exotic style of "Kokomo" and to make it clear, with "Dance, dance,

dance” and “Fun, fun, fun”, which are the ultimate intentions of his great music: dance and fun.