At least 39 people are pending in the courts or in Brussels of the reform proposed by the Government of embezzlement. 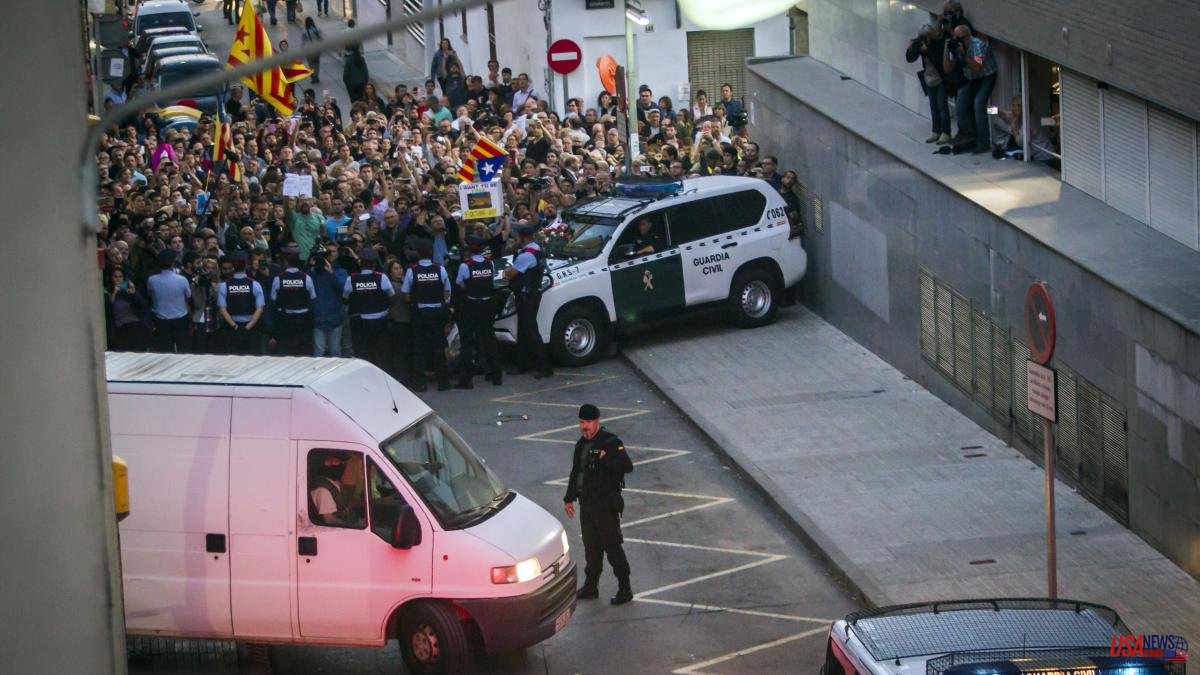 At least 39 people are pending in the courts or in Brussels of the reform proposed by the Government of embezzlement. Five courts in Catalonia have open procedures with defendants for this crime. Four leaders of the process – the vice president Oriol Junqueras and the councilors of the Presidency, Jordi Turull; Exteriors, Raül Romeva; and Treball, Dolors Bassa– were sentenced in 2019 for embezzlement in the preparations for the referendum, and it is one of the reasons for the prosecution of President Carles Puigdemont and his advisors Antoni Comín (Salut) and Lluís Puig (Culture). The cases open in the investigative courts 13 and 18 of Barcelona are pending a possible merger, as there are people accused in both, both ERC and Junts. Legal sources explain that the Prosecutor's Office had its indictment ready in the procedure of the 13th, but it is waiting twice: for the possible union of both cases and for the reform of the Penal Code.

The Supreme Court ruling that in 2019 sentenced nine pro-independence politicians or leaders establishes that four of them committed embezzlement: Junqueras, Turull, Romeva and Bassa. This, for example, became responsible for the opening of civic centers as voting centers, while the Minister of Education, Clara Ponsatí, assumed the opening of the schools, clearing the school directors of all responsibility if they opened the schools for it to vote. The Supreme Court ruling attributed both responsibilities to Bassa.

The trial was able to confirm that at least those four politicians spent public funds in the preparations. For example, 101,700 euros in advertisements in the European press. Or the creation at the Center for Telecommunications and Information Technology, which depended on Turull, of websites, applications, platforms and computer programs used in voting. Or the order to print and distribute 56,000 certified letters for polling station officials and 5,346,734 ordinary envelopes with census cards, which would have cost 979,661 euros.

Also cited in the ruling is the hiring of lobbies, such as the American consultancy S.G.R. Government Relations and Lobbying, for 60,000 euros, which would make it possible to establish contact with the media, institutions and US officials. For example, it was possible for The Washington Post to open an information tab on Catalonia in real time. Puigdemont published an article in this header. The sentence points out how in August 2017 Turull asked Junqueras – in charge of the Economy – to have exhausted "the budget credit for the campaigns", to execute a transfer from the Contingency Fund for 3,430,000 euros for an institutional campaign for the referendum . There is no proof in the sentence that the ballot boxes were acquired by the Government: in a clandestine operation devised by Jordi Sànchez, they were acquired in China by someone he trusted, who paid for them out of pocket.

In the macro-cause of the process of court 13 there are almost forty defendants, 20 for embezzlement. There are senior positions, but also technicians or businessmen. The former Secretary General of the Presidency, Joaquim Nin, is accused of having signed the contract for an advertisement that promoted the registration of Catalans residing abroad, as well as having authorized the acquisition of domains for referendum websites or the purchase of material electoral to Unipost. The general director of the company, Pablo Raventós, also accused, "hid from the Civil Guard" the order of the Government. The case also affects Francesc Sutrias, general director of Patrimoni, who signed the extension of the contract.

The indictment states that Antoni Molons, Secretary of Diffusion in the Presidency, "actively intervened and commissioned the campaign" of the registry abroad. He also commissioned the 1-O campaign that showed some train tracks. Ignasi Genovés, general director of Difusió, is accused of having signed supporting reports that served as the basis for contracting advertising campaigns. One of the contracts, to the company Focus Media SL, for the insertion of advertisements in the printed press exceeded 10 million euros.

Francesc Fàbregas, administrator of the weekly El Vallenc, is also charged. He ordered 7,000 copies of a document with the numbered list of voters and instructions for intervenors and members. He paid the 1,340 euros through El Vallenc, "newspaper that receives public subsidies," the order underlines.

Last month, the Superior Court of Justice of Catalonia sent Josep María Jové, former Secretary General of the Vice-Presidency, and Lluís Salvadó, former Secretary of Finance, to trial. Considered the architects of 1-O, they were in charge of preparing the structures of the future Catalan state. They will be tried for embezzlement, disclosure of secrets and disobedience.

The case of court 18 of Barcelona is based on a report from the Court of Accounts, which detected expenses that it sees as inappropriate for foreign action between 2011 and 2017 whose objective was "to publicize, promote and obtain international support for the process ”. There are twelve accused of embezzlement, from Minister Romeva; the secretary of the Government, Víctor Culell; or three people also charged in court 13: Albert Royo, secretary of the Diplocat, Aleix Villatoro, general secretary of Acció Exterior, or Teresa Prohias, director of Presidency services.

Cullell is accused of directly contracting the sociologist Salvador Cardús for a report on the international cooperation instruments between Spain and Catalonia in the event of independence; it cost 13,636 euros. Another defendant is Francesc Homs, for his work as secretary of the Presidency. He is accused, together with the former Foreign Secretary, Senén Florensa, of fragmenting a service contract for the travel and accommodation of attendees at a world meeting of Catalan communities in 2012. There are two minor contracts of 17,500 and 17,000 euros.

Josep Lluís Alay, head of Carles Puigdemont's office, is pending trial for a trip in 2018 as an observer of the self-determination referendum in New Caledonia, whose cost of 4,580.90 euros was paid by the Generalitat. The prosecution asks him for three years in prison and 17 years of disqualification from public office for prevarication and embezzlement, considering that it was a "personal" invitation that he should not have paid for with public money.

The Prosecutor's Office requests six years in prison and 27 years of disqualification for the former Minister of the Interior Miquel Buch for hiring a sergeant from the Mossos d'Esquadra as an adviser so that he would actually act as an escort for Puigdemont in Belgium. He is accused of embezzlement and prevarication considering that he allocated 52,712 public euros from the advisor's salary to cover the protection of the former president.