The Navarra Suma coalition, sponsored in 2019 by UPN, PP and Ciudadanos, has its days numbered. 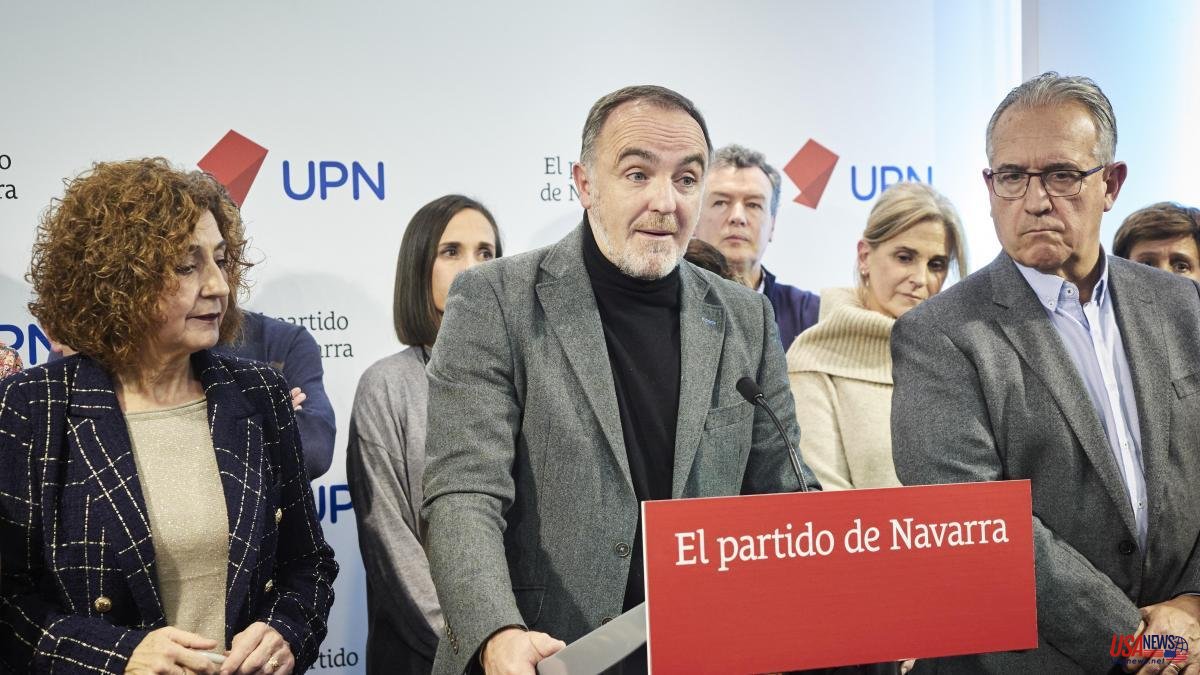 The Navarra Suma coalition, sponsored in 2019 by UPN, PP and Ciudadanos, has its days numbered. The UPN executive has agreed to run alone in the municipal and regional elections next May, alleging that the right will add more separately in its desire to regain power in the regional community. The response of the Navarrese PP has been eloquent about the divorce between these parties: if there is no coalition in May, there will not be one in the general elections either.

In this way, the Navarrese right will go with between three and four brands to the municipal and regional elections next May: UPN, PP, Vox and, in case they decide to run, Ciudadanos. The orange party, the third pillar of the coalition, has censured that "there has been a lack of respect and little education" in the UPN decision, which they have found out "through the press", according to Carlos Pérez-Nievas, Coordinator of Citizens of Navarre.

UPN's decision puts an end to a political proposal that was born with the expectation that the right could regain power in the main municipalities of Navarra and in the Community Government in the 2019 elections, after Uxue Barkos , from the Geroa Bai Basque coalition, took it from him in 2015, with the support of Podemos, Izquierda-Ezkerra and EH Bildu.

The coalition generated an obvious illusion in its political spectrum, even beyond Navarra. In fact, the brand was praised by a large part of the Spanish right as the example to follow at a time when there was speculation about a possible convergence of PP and Ciudadanos. Cayetana Álvarez de Toledo, then spokesperson for the PP in Congress, went so far as to point out in August 2019 that this coalition was "the most intelligent and noble experiment in contemporary politics". The PP even went so far as to register the brand 'España Suma' and their respective variants in each autonomous community: Cataluña Suma, Murcia Suma, Aragón Suma, etc.

The coalition achieved good results in the 2019 elections, although below its expectations and far from the uncontested majority that would have allowed it to govern without the acquiescence of the PSN. In fact, the great key to those elections was that, although Geroa Bai and EH Bildu maintained their 2015 results and even improved them, the left represented by Podemos collapsed in favor of the PSN. The Socialists placed themselves as the second party in the foral community, after Navarra Suma and surpassing Geroa Bai. And that is where they had to decide between supporting the right, the formula in force until they hit bottom from an electoral point of view in 2015, or governing with the support of the parties that had supported the government of Uxue Barkos.

The socialist María Chivite finally became the new president of Navarra, within a regional government with advisors from Geroa Bai and Podemos, also supported by Izquierda-Ezkerra. EH Bildu would stay out of the Government, although he has externally supported the Executive at key moments.

Navarra Suma, meanwhile, saw how a new alternative government continued the change initiated by Uxue Barkos. The right, which had held the regional government for two decades, would remain in opposition for another four years.

The coalition would manage to recover some important city councils, especially that of Pamplona. The PSN chose not to support Joseba Asiron (EH Bildu), mayor between 2015 and 2019, so that Enrique Maya (from UPN and mayor between 2011 and 2015) would recover power for Navarra Suma. In any case, the coalition would be left without the 'jackpot' from the Government of Navarra, which in the end would mean the beginning of the end for this formula.

Javier Esparza, president of UPN, has been stressing that the decision is motivated by an electoral calculation. The regionalist leader indicates that his party and the PP will add more separately, a reflection that includes several derivatives. In the first place, Esparza hopes to be able to attract socialist voters dissatisfied with his party through the UPN acronym, either because of the external support from EH Bildu that the Chivite government has been receiving in Navarra or because of its position with respect to Pedro's executive Sanchez. The regionalists consider that the company of the PP would scare away those voters, likely to support, in Esparza's opinion, a UPN that would focus its speech in the face of May.

Secondly, Esparza's calculation includes another derivative that has to do with the distribution of the vote in Navarra. Taking into account that Basqueism (Geroa Bai) and sovereignism (EH Bildu) account for a third of the regional political space and, likewise, that the regional right adds a similar proportion (36.5% in 2019), UPN's will to Keeping that Basque space away from power requires the participation of a part of the third great political space in Navarre, that of the left. Logically, Podemos and Izquierda-Ezkerra, who will present themselves together in May, are not going to lend themselves to collaborating with UPN, but Esparza wants to keep the 'ace' up his sleeve of a hypothetical understanding with the PSN.

The formula does not seem likely today, although it is not impossible and, above all, it is the only possible way for UPN to regain power in Navarra. The understanding between the UPN and the PSN worked for more than two decades in the community, although with catastrophic results for the Socialists, with that 2015 electoral ground after governing in coalition during the preceding years. The conditions that allowed for that alliance do not exist today, but electoral arithmetic and political interests, both in Navarre and in Madrid, could favor other conditions.

Esparza's decision has to do with that calculation, that is, with a desire to attract disgruntled socialists or, failing that, attract the PSN itself, even allowing it to govern with the conditional support of UPN.

The maneuver that left the UPN without deputies in Madrid last February also sought to follow the path of the UPN-PSN understanding. Then, Esparza agreed to allow the approval of the labor reform, through his two deputies in Congress (Sergio Sayas and Carlos García Adanero), in order to open a way to meet with the Socialists. The change of stickers included agreements on all fronts: Congress, the Government of Navarra and the Pamplona City Council. But above all it was intended to be the beginning of a new cycle that in the medium term would propitiate the turn of the PSN to the right.

The story is known. Sayas and Adanero rebelled, and Esparza's plan was derailed. UPN showed the exit door to the two wayward deputies, who ended up confronting the party president head-on.

The PP now wanted the two deputies to play a role in the new coalition, and the UPN flatly refused. The popular ones, in addition, wanted their acronym to appear in the coalition, in coherence with the will of Núñez Feijóo to regionalize the PP.

In any case, the end of Navarra Suma has to do above all with the confirmation by UPN that the union of the acronyms of its political spectrum does not add up enough to regain power.