“To think that the National Police has been in the hands of these people…” With those words he summed up the bitter taste – between astonishment, stupor and rejection – that caused among officials of the National Court to listen to who was between 2012 and The uniformed head of the body, Eugenio Pino, testified for the first time about the matter of the Pujol pen drive in 2016. 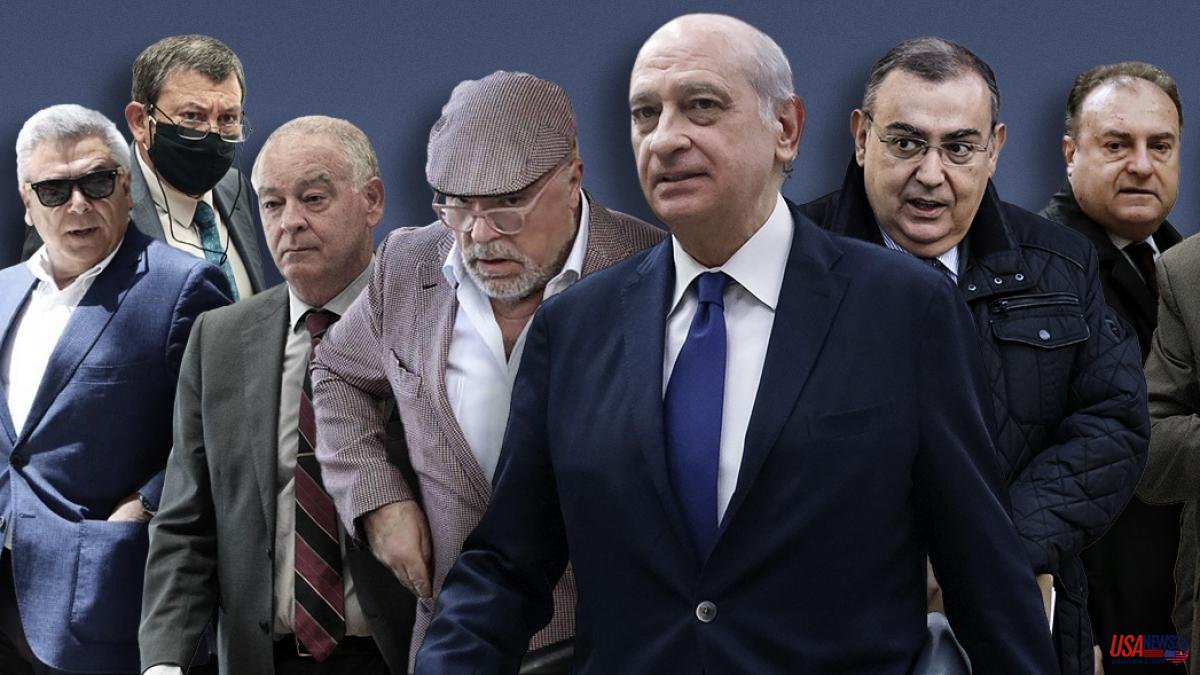 “To think that the National Police has been in the hands of these people…” With those words he summed up the bitter taste – between astonishment, stupor and rejection – that caused among officials of the National Court to listen to who was between 2012 and The uniformed head of the body, Eugenio Pino, testified for the first time about the matter of the Pujol pen drive in 2016. Judge José de la Mata discovered in 2017 that Pino, along with other high-ranking police officers, had tried to introduce evidence illegal in the summary opened to the family of the former president of the Generalitat for their accounts in Andorra.But this case was only the tip of the iceberg: under all that was the sewer.

The internal wars of the so-called sewers of the State for their own survival received the final death blow last week. The Superior Court of Justice of Madrid sentenced Pino, former deputy operational director (DAO) of the Police, to one year in prison for revealing secrets in one of the works of this "para-police" group: the so-called Catalunya operation to attack police officers. independence leaders. From there also came the famous ghost report without seal or author about former president Artur Mas published in the press in 2012, in the middle of the electoral campaign and at the height of this group. But this lunge at the sewers comes after an arduous disinfection process that has lasted years.

These sewers have been bleeding for a long time. While they worked in the sewer under the anonymity everything was shot for this group now cornered by justice. They were protected. They hid each other under the umbrella of political power. The darkest time in the Ministry of the Interior was lived during the mandate of the popular Jorge Fernández Díaz. On one occasion, one of its greatest exponents, José Manuel Villarejo, defended the need for a State to have sewers: "They don't generate shit, they clean it." And this is, without a doubt, one of the keys.

As explained by one of the main people responsible for its dismantling, this group did not act for and in the service of the State. For this reason, he insists, it is not correct to refer to him as “patriotic police” – a term coined by Pino himself. They worked for them, to protect themselves, defend themselves, promote themselves and enrich themselves and, incidentally, offer their work to the government in power, but for "pure interest", as this source recalls. "That's not patriotism," he says.

Its members were placed for years in key positions in the organization chart of the Police. They were untouchable. Until the cracks began, which little by little were getting bigger. But what was the first leak? Several sources of the investigation agree that it was the Emperor case, against the Chinese mafia. In 2014, a judge from the National High Court charged several police officers with favors for Gao Ping's plot. One of them was Carlos Salamanca, commissioner of the Barajas airport (Madrid). In the internal affairs report that led to this investigation, the name of Villarejo's son appeared. And that's where all the alarms went off.

In the end, the National Court acquitted them on the grounds that the favors were the result of the professional relationship, but the crack was already made and the nerves – between them – began to surface. According to investigators, Salamanca maintained business with Villarejo and, in fact, both were arrested at the same time in November 2017, within the framework of Operation Tandem. Charly and Pepe Villarejo, as they called themselves, were "logs". They regularly ate in a Madrid restaurant with other police officers, politicians, businessmen, judges and prosecutors. Shortly after the Emperor affair, Villarejo's name came out of the shadows.

Several false steps put the former commissioner in the firing line and along with him all those who gave him protection: not only other police officers, but also political officials and journalists. In 2015, a recording by Villarejo of former Madrid president Ignacio González came to light to implicate him in a shady affair, which brought the former commissioner's name to the fore and, a few years later, the former PP leader ended up in jail for the Lezo operation for the collection of bribes after an Anti-corruption investigation.

The option that Villarejo considered appropriate to protect himself was to press harder and harder. He filed a complaint against the National Intelligence Center (CNI), members of the Government, several Anti-Corruption prosecutors and journalists. This new crack caused people to begin to separate from him, including judges and prosecutors who had been by his side in the best moments. And above all, an enemy was sought: the then director of the secret services, Félix Sanz Roldán.

His indictment soon came for the cases of 'little Nicolás' and the stabbing of Dr. Elisa Pinto between 2015 and 2016. For the first, it was discovered that he had maneuvered to try to annul the cause for which the young Francisco Nicolás Gómez had been arrested. Iglesias, linked to renowned businessmen. And by the second, everything got out of hand. As it has now been discovered, initially it was a simple task, to scare a dermatologist. But the mission got complicated, she was stabbed, she recognized Villarejo and now he is going to sit on the bench. The judge sees indications that he was hired by businessman Javier López Madrid for this purpose. The commissioner who took on the case, Jaime Barrado, did not help Villarejo, contrary to what his group of collaborators used to do. That is why he was expelled.

From the Ministry of the Interior with Jorge Fernández Díaz and his number two Francisco Martínez, an attempt was made to prevent the sewer from continuing to bleed to death, but it was beginning to be inevitable. The police chief, Eugenio Pino, separated the police officers who were investigating Villarejo. The reason was simple: if one fell, they all fell. His names, in addition to Pino's, soon began to grab headlines: José Luis Olivera, José Ángel Fuentes Gago, Bonifacio Díez Sevillano or Enrique García Castaño.

Their surnames were becoming better known and appeared everywhere. In the matter of little Nicholas for trying to destroy the investigators; in the subterfuges used to accuse the leaders of Podemos of any crime, including linking their financing to drug trafficking; in the Catalunya operation, or in the espionage on former PP treasurer Luis Bárcenas when he became the number one enemy of the conservative party.

Until the recording arrived at Fernández Díaz in his office. That was the point of no return, the one where he put everyone against everyone. The then head of Interior was replaced and Juan Ignacio Zoido arrived. The cleaning began. García Castaño, head of the unit that controlled all the recording systems, was fired and Pino and Villarejo retired.

At the beginning of the cleanup, a new internal affairs unit and two Anti-Corruption prosecutors arrived, who dealt the blow that left the sewer seriously injured. In a quick and clean operation, and avoiding leaks that would raise the alarm, in November 2017 Villarejo and Salamanca were arrested. And then all the others fell. Today they are all accused, prosecuted or investigated.

When Fernando Grande-Marlaska arrived at the Ministry of the Interior, he gave another push to end the sewers. The ultimate. Olivera, who was about to become head of the entire Police, was removed from his position; and Fuentes Gago –the one who came to sign a report endorsing the entire business structure of Villarejo– had to return from his golden destiny in Mexico. In addition, government sources recall that one of Marlaska's first decisions upon arriving at the Interior was to order total control of the use of reserved funds, to avoid issues such as the Kitchen operation.

This same week, Marlaska was very blunt in the Senate: "There are no state sewers." "We have spent four years breaking these really minimal strategies," said the former magi