The decline of the Barça captains 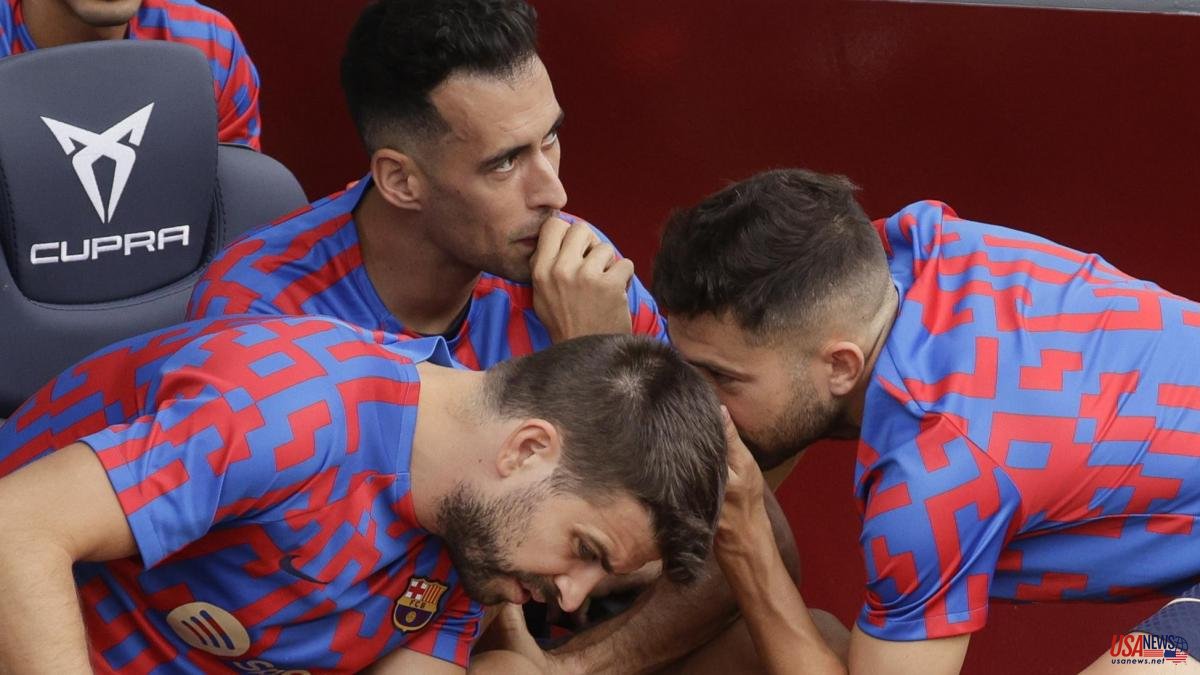 From undisputed headlines to bench meat, read Jordi Alba and Gerard Piqué. From irreplaceable pivot to footballer who requires more and more dosage, that is, Sergio Busquets. From almost being out to a useful piece, as long as his physical condition allows it. This is the case of Sergi Roberto. It is the new life of the Barça captains, increasingly important in the locker room than on the pitch, for reasons of age and performance, and whose contracts, except for the right-back, represent a mortgage for the entity (about 200 million) . Xavi spoke with the four before the season and explained to them black on white what their situation was going to be, although Balde's appearance has complicated Alba's participation and the plague of injuries in defense may now benefit Piqué. The coach has no complaints about the behind-the-scenes behavior of these players who have lost weight.

The Barcelona coach had a very sincere and open conversation with the defender. He told him very clearly that he was not going to play and that if he stayed he would be the last centre-back in the squad. Piqué took on the challenge, picked up the glove and, with a high level of self-confidence, decided to continue at the Camp Nou to try to reverse the matter. He now perhaps he did not imagine that he was going to play so little. He has only played in two of the eight games of the season and has only started one (in Cádiz). Ronald Araújo, Jules Koundé, Eric Garcia and Christensen have passed him. Now, having arrived at a month of October full of important matches, with qualification for the Champions League at stake and the match at the Santiago Bernabeu, Piqué has all the numbers to gain minutes due to losses in defense. There are only three central defenders left at Xavi's disposal and the third central defender would be him. He therefore he will be less on the bench. His contract expires in 2024. He negotiated a reduction of his high salaries to allow the registration of new signings but no agreement was reached.

Known is the excellent personal relationship between the side and Xavi. The technician did not deceive him. He told him that they were going to sign a competitor (Marcos Alonso) and that he would start from second place. But the coach did not count on the emergence of the young Balde, who has knocked the door down and has conquered the one from Terrassa. He sees him as a diamond in the rough, very strong physically and with a lot of personality. His idea was not to have three left-backs on the payroll but that's the way things are and Alba, who continues to be called up by Luis Enrique for the national team, has it raw at Barça. He has been a starter twice and has participated in four games. His anger is not with the coach, but with the director of football, Mateu Alemany, who did not warn him of the agreement that Barça reached with Inter to try to finalize Alba's departure. That made him extremely angry. His contract, not exactly cheap, also ends in 2024.

At 34, Badia's man continues to be a key player for Xavi on and off the pitch. Of course, with a higher dosage than in previous campaigns. In three of the eight games he hasn't played and Xavi begins to see De Jong as a footballer capable of playing, finally, as a midfielder. Busquets' contract ends in June and who else who least takes it for granted that he will end his Barcelona stage heading to the United States but last Friday the footballer himself opened up new questions by stating that his future is yet to be defined and that he does not rule out continuing .

Xavi has a special appreciation for him. He values ​​his job and his knowledge of the Blaugrana system. After renewing very low for a season, the coach's idea is still to use it as a complementary piece. As long as injuries allow it. Because that is the weak flank of the footballer. He participated in the first five games of the season. Yesterday it was tested to try to be in Mallorca. He has good feelings.