The day that Ermua united all the Spains

The spirit of Ermua lasted as long as dreams, although its consistency achieved what the repression of Francoism, the Amnesty law of the transition, State terrorism, administrative decentralization and the political pacts of democracy had not achieved: finish with the scourge of terrorism in Spain from unity and the rule of law. 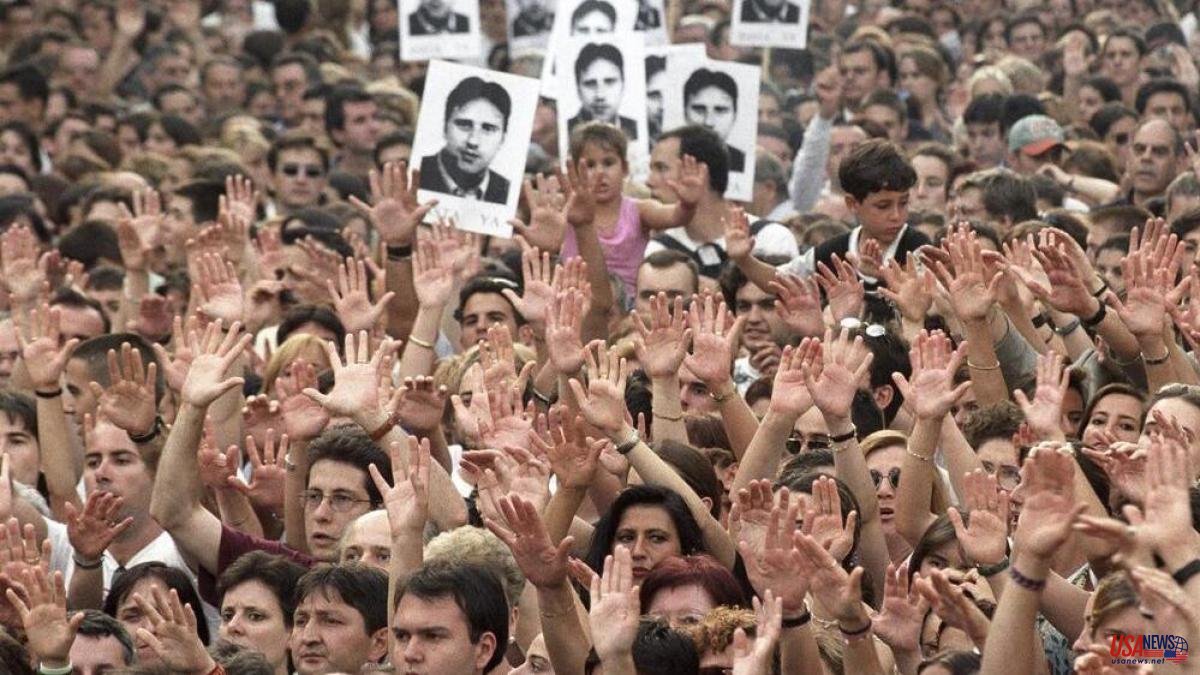 The spirit of Ermua lasted as long as dreams, although its consistency achieved what the repression of Francoism, the Amnesty law of the transition, State terrorism, administrative decentralization and the political pacts of democracy had not achieved: finish with the scourge of terrorism in Spain from unity and the rule of law.

Many historians, in fact, place that fateful July 12, 1997, in which the terrorist group ETA assassinated the young councilor of Ermua, Miguel Ángel Blanco -he died at dawn on the 13th- as the beginning of the end, declared by the group itself in the 2011 with the announcement of the definitive cessation of its armed activity after a long inactivity.

The dramatization caused by the gang itself of what was presented as an announced execution after the mayor's kidnapping, with a day and time set if the Government did not modify its prison policy, fed by all television channels, encouraged the unanimous reaction of a society that stood up to ETA in a context of economic recovery and well-being.

The measured interventions of the then Minister of the Interior, Jaime Mayor Oreja, the declarations of support from the main spokespersons of the Spanish and Basque political parties and the very figure of the sentenced councilman, a young man of his time passionate about The Lord of the Rings and with their own rock band, aroused strong empathy. All this led to what soon became known as the spirit of Ermua and which manifested itself in the streets of various Spanish cities with massive gatherings.

Politically, this spirit materialized in the Law on Political Parties, approved in 2002, which involved the outlawing of parties that explicitly supported violence and terrorism. A legal reform that resulted in the outlawing of Batasuna, Basque Nationalist Action and the Communist Party of the Basque People. Although in Basque politics it was limited to actions such as the motion of censure presented in the Mondragón town hall by PNV, PSE-EE and Eusko Alkartasuna to remove Herri Batasuna from the mayor's office.

On a social level, existing initiatives such as Gesto por la Paz were joined by others that tried to maintain that unitary spirit of Ermua, such as the Ermua Forum, promoted by intellectuals from across the political spectrum. For his presidency, the Portuguese poet Vidal de Nicolás was proposed, a historical militant of the PCE exiled after the Civil War, a worker in the Sestao shipyards after his return to Spain. His political militancy led him to be imprisoned along with Enrique Mújica, the future Minister of Justice.

At 76 years old and after a long political and literary career that led him to be part of the Tertulia de la Concordia together with authors such as Blas de Otero or Gabriel Aresti, De Nicolás accepted the challenge. One of his poems, completed after the assassination of Miguel Ángel Blanco, although already started before, became the founding speech of the group. It is what we reproduce.