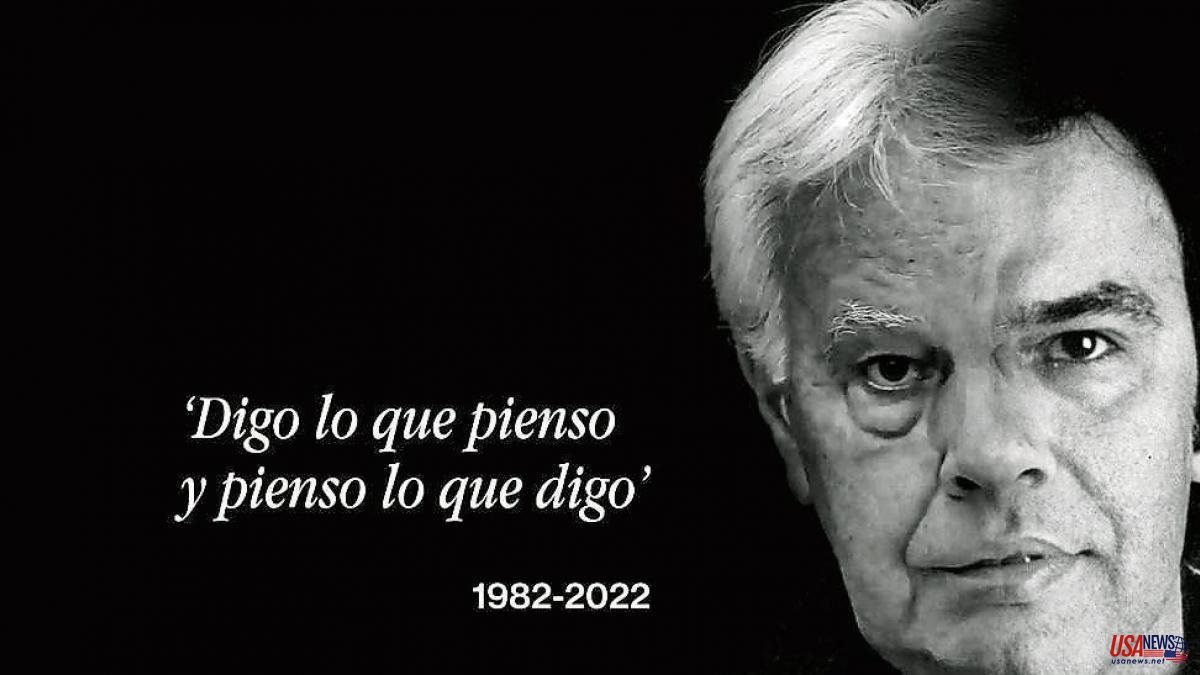 Fibes Space, Seville. 11.20 a.m. It's Saturday, October 29. The 40 years of the first socialist victory are commemorated. The capacity is overflowing. Minutes before the rally, an unexpected meeting takes place between Felipe González Márquez, 40, and President González, 80. That's the thing about reading Borges too much. As in "Vinticinco de Agosto 1983", the least expected day you find yourself in a face to face. With your name written and the ink still fresh on one piece. Next to another who looks so much like you but younger or older. Being two, being the same. Nothing unusual in dreams like this.

Felipe: This really is an infrequent tune, isn't it, President?

Felipe: “For the change”.

González: It has always been better than contra in political communication.

Felipe: Because it was that generation that we felt unique, while we thought that our destiny was to forge the future.

González: Because it was the engine of society. But then you were too young to suspect that existence is not made of sudden impulses and obstinate constancy, but of compromises and forgetfulness.

Gonzalez: Or Memories of the Future (laughter).

Felipe: I see that you have gained in significant special autonomy.

Gonzalez: Sure. Being able to take your mask off multiple times is one of the rare perks at this age.

Felipe: But you express yourself differently. You speak more with your head than with your heart, as if you weren't you.

González: Perhaps it is the biggest difference between you and me. To commemorate is to bring to memory. Remembering is doing it with the heart.

Felipe: Remembering is easy when you have memory, forgetting is difficult when your heart moves.

Gonzalez: Why have you come?

Felipe: Your party needs you.

González: What you need is a real rent agreement, not a salary agreement. Look at the economy and the inequality gap: if we take too long to adjust, they will adjust us.

Felipe: There is a very negative state of mind in the citizens and we have to take responsibility to change it.

González: If you don't take charge, you are doomed to immediate failure. Even when you're right.

Felipe: But in a democracy reason is expressed in number of votes.

González: And in a democracy, the truth is only what citizens believe to be true.

Felipe: Either you adjust or they adjust you then. Well, it is better to come to an agreement among Spaniards.

Gonzalez: Better. And show determination. As Panamanian dictator Omar Torrijos used to say, "if you get upset, they loosen you up."

Felipe: I'm listening to the thread of your books. But the phrase is not from Torrijos, but from the Mexican union leader Fidel Velázquez.

González: Like that "whoever moves doesn't appear in the photo", which isn't from Alfonso either..., but also from Fidel.

Felipe: This government has come out ahead in the face of the pandemic and now the war in Ukraine. A spectacular challenge that society should value.

Gonzalez: Right. But wanting power is not the same as wanting government. Spain wants a country project that is as least mercenary as possible. We must preserve coexistence as a treasure. One has the right to change a law, but not to break it.

Felipe: Agreements, like progress, never go in a straight line.

González: A matter of boom and bust...

González: My big mistake was focusing on the virtues it doesn't have and disdaining the cultivation of the ones it does have.

Felipe: That one knows that words have flesh and blood, clothes and gestures.

"It's time for the president," the escorts tell him in the background. Pedro Sánchez has already arrived at the auditorium. Being two, being the same, President González has daydreamed for about two minutes in the waiting room. “What could they have been? Seconds?” he thinks. Outside, on the spot, three thousand citizens have entered from the street. Who are they? The questions remain the same: what do they think of us? Do they follow our debates? Are they excited or disappointed? Are we doing the best for their future, which is that of our children? Outside, which is actually inside, are those children who are already parents with new dreams. Being two, being the same, any figure can be inscribed inside a circle, recognized Felipe. Outside, a unique generation awaited him, destined to shape the future. Again.