The conditions of Junts to continue in the Government: three key points

The celebration of a Diada divided between the partners of the Government has acted as an accelerator of the differences that have been brewing for months within the Catalan Executive. 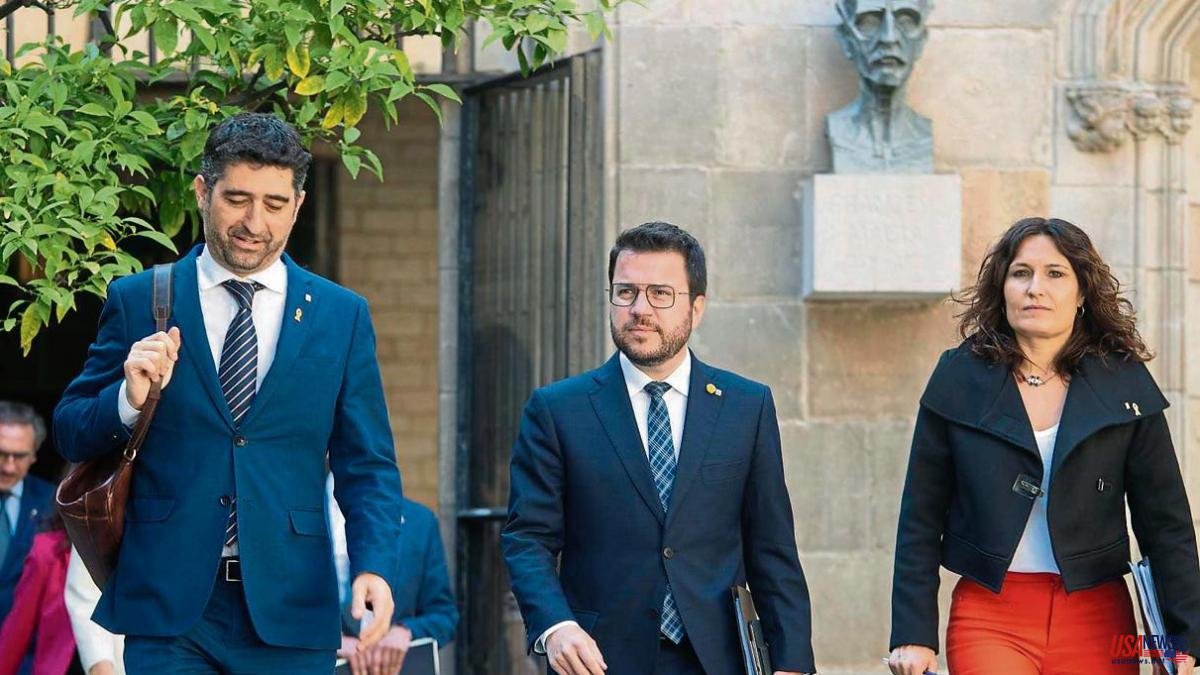 The celebration of a Diada divided between the partners of the Government has acted as an accelerator of the differences that have been brewing for months within the Catalan Executive. It has been put on the table not only that different strategies are outlined in an eventual path towards independence but that, for the moment, there is little interest in modifying positions.

In this strategic puzzle, the different sensitivities in Junts also come into play with respect to continuity in the Government, which is looking for its space and orientation. Hence the request to President Pere Argonès to comply in the context of the investiture debate (September 27) with three points that are considered fundamental to the investiture agreement: the coordination of a space for the strategic management of the independence movement, the negotiation with the Government Spanish for amnesty and self-determination and a common front in Madrid.

The points are already known but they are neither interpreted nor approached in the same way. There may be other issues of discrepancy in the management of the Executive in socioeconomic matters, but the audit carried out by Junts gave it an "approved" and it is not now a matter of destabilization. The "suspense" was for the national axis.

Space of strategic direction of the independence movement

Junts calls for the reconstitution of this space with the participation of pro-independence entities to offer citizens, it is pointed out, a traceability of the strategy to achieve independence. This General Staff, which functioned at the beginning of the legislature –ERC, JxCat, the CUP, Òmnium, the ANC and the Consell per la República– would incorporate new actors, as indicated. It is about maintaining a thread of contact with the street and offering the independentistas new proposals after five years of emptiness after the procés. Nor does it escape in the analysis that they do not want to give the president the baton of command. This general staff ceased to function in the spring of 2022 precisely because of the misgivings that it ended up articulating around the Consell per la República, chaired by Carles Puigdemont.

Aragonès clearly expressed this Thursday in Vanguard Forums his lack of enthusiasm with this proposal. “We must not discuss who is in charge, but what we do. I have put on the table a proposal to force the State to negotiate, we must focus on the negotiation process. This proposal can be criticized, but can it be criticized compared to what? Is there any materializable proposal?” Aragonès wondered. Esquerra has opted for the strategy of broadening the base of the independence movement, without dates and without haste, and the government crisis with which its partners threaten does not get it off the road. Another thing is that some formula is arbitrated to refer to the JxCat demand in the general political debate.

These are the points demanded by Junts at the negotiating table with the Spanish Government under the premise that this table should not be confused with a "bilateral transfer commission". The Republicans, on the other hand, have made a strong commitment to negotiating with Pedro Sánchez and consider that the first step to achieving this “amnesty and self-determination” is to dismantle the “repressive architecture of the PP”. They admit that it is complicated, but this quarter is crucial to know if legislative changes can be achieved. The negotiating table continues without representation of Junts. And the president insists that this should be from ministers.

The three requirements of Junts follow the same thread and relevance is given to the strategy in the Congress of Deputies. In JxCat it is considered that the nuts can be tightened more to the Government of Pedro Sánchez, presenting more demands, such as the fiscal deficit. A front that is asked to act on the national axis.

But the scenario in Madrid is based on a reality: ERC has 13 seats and Junts 4. Apart from a line of action framed in a more comfortable left-wing axis for ERC, no one is unaware that the progress of the dialogue table it is also linked to the stability of the Sánchez government.

The partners of the Govern continue negotiating in the face of the general policy debate. The swell will continue, the question is whether a short-term solution can be found.