The Colombian left caresses power for the first time in history

The left is very close to achieving power in Colombia for the first time in its troubled history. 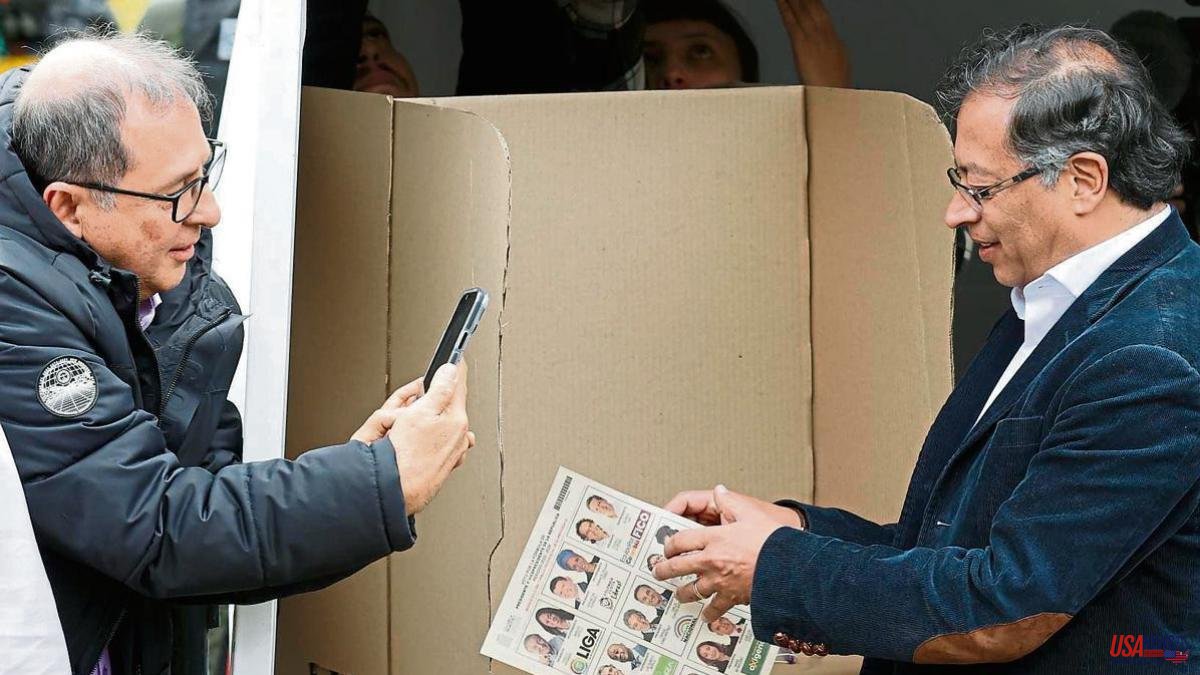 The left is very close to achieving power in Colombia for the first time in its troubled history. Unless the polls were terribly wrong, the leftist Gustavo Petro would have won the first round of yesterday's presidential elections, but he would need the second round on June 19 to ensure that he reaches the House of Nariño.

The polling stations closed at four in the afternoon (11 p.m. in Spain) and two hours later, at six, (one in the morning, Spanish time) it was expected that the Registrar's Office –the body in charge of organizing the elections– would begin to disseminate the results.

All previous polls gave victory to Petro, with close to 40% of voting intentions, while second place was disputed by the right-wing and establishment candidate, Federico Gutiérrez, with around 25%, and the populist Rodolfo Hernández, around 20%.

If that high percentage is confirmed for Petro, the senator and former mayor of Bogotá would not have a very difficult time prevailing in the second round, although it would not be the same if Gutiérrez passes the ballot or if Hernández does. The latter, an unclassifiable millionaire, would gather a more centrist and anti-Petro vote, which could put the candidate on the left in trouble.

It is the third time that Petro, a 62-year-old economist and former M-19 guerrilla, has tried to become president. He was fourth in 2010 and four years ago managed to get through to the second round, but was defeated by the current president, the conservative Iván Duque.

Petro is running for the Historical Pact, a leftist coalition that has been moderating its discourse towards the center to broaden support. This does not prevent the oligarchy, which has held power through different parties and conservative presidents throughout history, from seeing Petro as a great threat. Petro himself has denounced throughout the campaign the possibility of being the target of an attack, in a country with a tragic tradition of assassinations of presidential candidates or political leaders who proposed radical changes like the ones he seeks. At his rallies, or those of his vice-presidential candidate, the Afro-Colombian Francia Márquez, bodyguards have positioned themselves around them both on stage, ready to put up large bulletproof shields at the slightest threat.

Petro proposes to end inequality in an unoriginal way: raising taxes on the rich and especially taxing the 4,000 greatest fortunes. In addition, he wants to put an end to latifundismo, promoting an agrarian reform, which in a country where every year more than a hundred social leaders are assassinated – most of them in rural towns – is a provocation to the cacique power. Petro also proposes a change in the energy model and stop oil exploitation. Or profoundly reform the National Police and the Armed Forces.

“I trust in Colombian society, in its willingness to change. In the end there are only two relatively simple alternatives: either leave things as they are in Colombia, which means more corruption, more violence and more hunger; or change to Colombia”, declared Petro yesterday when voting in Bogotá. The favorite said to pay with the "hope to change history."

For his part, President Duque, after voting, made a significant appeal to "vote with enthusiasm, with joy, without hatred, without prejudice and without bias."

Until the closing of this edition, the day took place without incidents of consideration reported by the security forces, the different political parties or the numerous international observers deployed throughout the territory, 36 of them from the Catalan mission, made up of various organizations.

However, he continued planning the denunciation of manipulation of the result against the Registrar's Office, reiterated by the left throughout the campaign, after 400,000 votes of the Historical Pact were lost in the March legislative elections, which were finally awarded to him.