The civil war, seen in color for the first time

The blood of the civil war was red, although in the photos where we have seen it it always appears black. 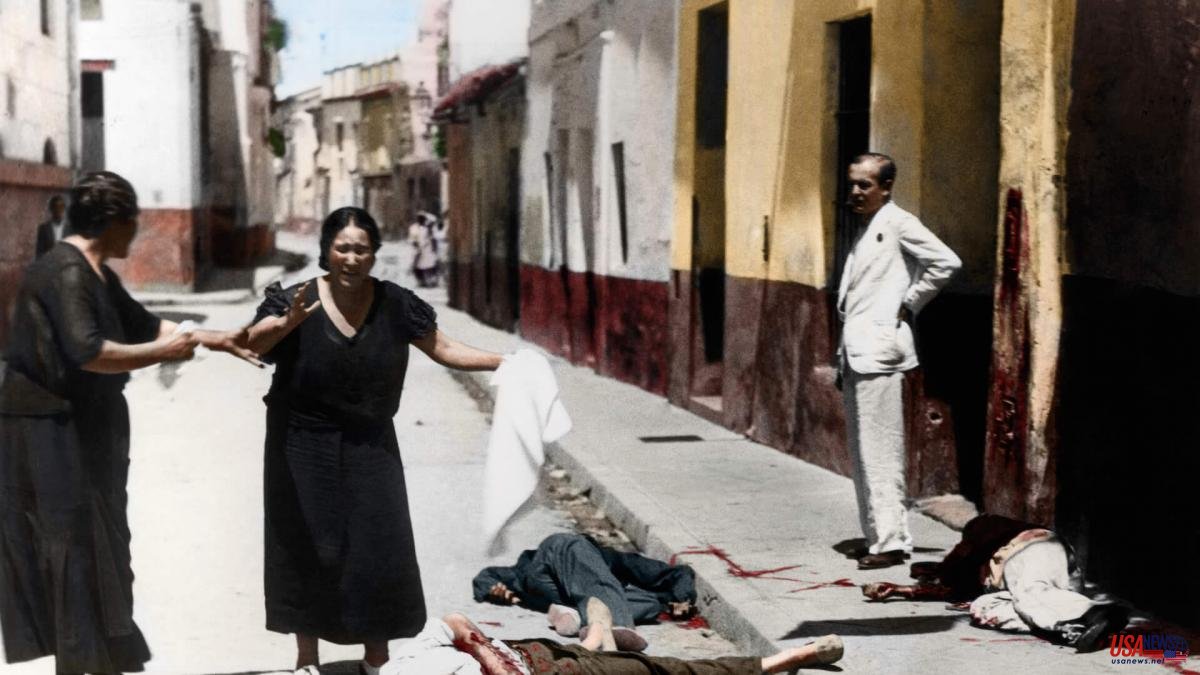 The blood of the civil war was red, although in the photos where we have seen it it always appears black. The volume Blood on the forehead (Desperta Ferro), which goes on sale today, is a paradoxical book because it brings us closer to reality by manipulating it, since it shows 181 photographs of the Spanish conflict digitally colored by the photographer Jordi Bru and commented by the historian and journalist Jesús Jiménez. The result is a visual blow that provides a different, closer perspective to a conflict that continues to challenge us.

Various colored images of the war circulate on the internet, which have been seen on occasion in some artistic projects. In 2016, the documentary Divided Spain was released, by the production company Minoria Absoluta, which colored cinematographic images of the conflict and can currently be seen on Discovery Plus. But, according to its publishers, Blood on the forehead -the title comes from Machado's famous poem on Lorca's assassination: "Federico fell dead / —blood on his forehead and lead in his entrails—") is "the first book that uses this technique in its entirety, also stringing together a coherent story and respecting all copyrights".

"It is not possible to understand the civil war without the photographs -comments Jesús Jiménez, by phone-. The texts, although numerous, are designed to contextualize the images, it is an eminently visual book. I make a minimal description of the event that is shown and then I link it with the general problems of the contest".

"I have had quite a few surprises -he continues-. The images come from many sources, but the hard core comes from the National Library. We not only wanted to show the war front but also what Spanish society was like during the civil war, social, economic issues , cultural..."

Blood on the forehead is the editorial's first in-house colored photography project, which had, however, already published the translation of two others, the work of the Brazilian visual artist Marina Amaral and the British historian Dan Jones, The World on Fire (about the two world wars) and The Color of Time, a visual history of the world between the years 1850 and 1960.

How to know the real color behind a black and white image? "I document myself a lot. As I also dedicate myself to taking photos of historical recreations -explains Jordi Bru-, I already knew many uniforms, such as the color of the straps, the type of rifles and weapons. I have allowed myself certain freedoms in things such as imagining the color of the tie that Azaña is wearing or that of Lluís Companys, whose stripes I have painted with the colors of Catalonia. And I have an archive of 1,500 posters from the civil war that has been very useful to me, although there is always one that you are missing and you start looking for it. It's funny that one usually imagines them all polychrome but sometimes they were only printed in one color or two".

"The red blood transforms the images a lot," admits Bru, "as in the case of the murders on Calle Triana in Seville. By coloring them, you clearly realize that they have been shot when they were leaning against the wall. It was a cold-blooded murder, and not an action of battle".

The anecdotes are many. "I've had paralyzed photos for weeks. The one of hundreds of refugees in Argelès-sur-Mer, I painted the caps thinking they were mossos d'esquadra but then an advisor told me they were assault guards and I had to start over. In another where you see some refugees in Le Perthus, you see some signs with the name of the town and I asked some veteran gendarmes, who confirmed that they were a very characteristic green. There is even a car license plate, and I had to find out if it was Belgian or French because in the first case the numbers were in red and in the second in black". About the faces, "each face has five layers of color, and I interpret the grays to know if they were more or less pale."

The bombing of Barcelona seen from the sky "is surely the image that has given me the most work, with the entire grid of streets, coloring each group of blocks, each house, plus the interior patios, the grassy parks, the lots with earth , the Barceloneta beach, the roofs that are not the same color in the Eixample or the Gòtic...".

"When I commented that we were going to embark on this book -says Jiménez-, the first thing they asked me is: from which side? From that of historical disclosure. I have been very neat and aseptic with language, avoiding value judgments and I have always relied on academic historiography".

Several of the scenes are reminiscent of recent images from Ukraine. "It has come to our heads -Jiménez admits-. This book operates more with emotion than with reason, it shows the people who lived through the conflict, it is more from memory than from history". Which gives rise to a reflection: "The photographic record of the civil war was sifted by the needs of the press, propaganda or censorship, they told you what they wanted to tell you and we have had difficulties even today to find certain things. No I stop thinking about that when I see the news today, those video images suffer the same conditions and needs that the photographers had in the civil war".

In any case, he admits, "seeing those photos that I already knew in color was like seeing a new photo, recovering the ingenuity of the first reader's gaze."