"The civil war does not attract me, it is still controversial"

Atypical for his works -Pérez Reverte baptized him "painter of battles" and that is how it has remained-, Augusto Ferrrer-Dalmau (Barcelona, ​​1964) left the textile business and chose the passion for recreating great battles in history, especially the Spanish one. 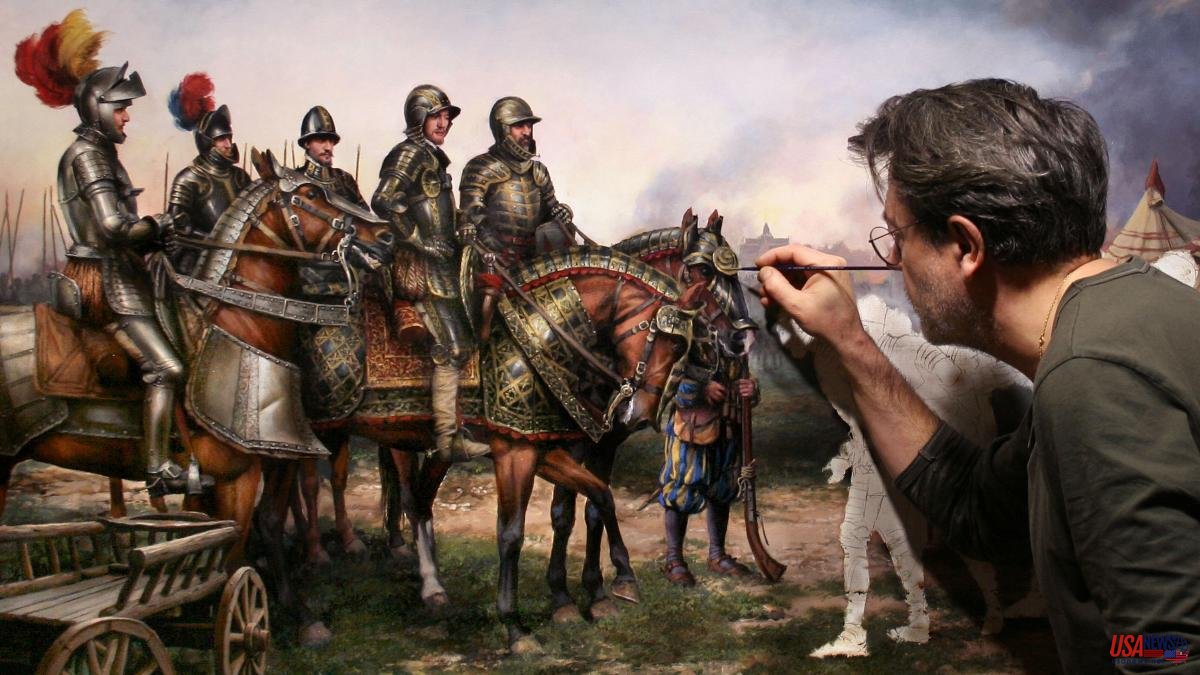 Atypical for his works -Pérez Reverte baptized him "painter of battles" and that is how it has remained-, Augusto Ferrrer-Dalmau (Barcelona, ​​1964) left the textile business and chose the passion for recreating great battles in history, especially the Spanish one. Except for the civil war. He is one of the 33 artists and entities distinguished with the gold medal for Merit in Fine Arts, awarded by the Ministry of Culture.

You have an almost bullfighting nickname and at the same time accurate: "the painter of battles." When and how did this vocation/fascination for battles begin? I have the impression that you were a young bourgeois called to follow the family textile business.

My hobby goes back to childhood, already at that time I was a fan of action and adventure movies, and above all a devourer of history books. Yes, it can be said that my world was textiles, in fact I started working as a textile designer but I decided to turn my life around and take another path.

What war marked you in your youth?

The Second World War was the most recurring in the cinema and in tales of warlike feats.

Is it especially risky to paint the Spanish civil war? It would also be difficult to choose an episode...

It is a war that personally does not appeal to me, perhaps because it is still controversial, and if I had to choose an episode, I would choose the Teruel front because of its harshness or perhaps the battle of the Ebro, where I painted a series of sketches for Pérez Reverte's book " Fire line"

When you choose a subject –there are so many battles-, do you start by documenting yourself or do you first “see” the work –see the plot- and then investigate?

The first thing is to read the story and then the whole documentary theme, it is the longest part of a painting but also the most exciting. As I investigate is when I begin to visualize the scene of the painting

His friend Pérez-Reverte highlights the absence of "evil" in those portrayed characters, who kill and die. You don't seem like a Goya in that...

I, more than evil, see survival, I try to portray those moments and, depending on the cases, put myself in the shoes of the one I am painting.

Is "The Surrender of Breda" the work to which every "painter of battles" aspires? Tell me which are the war paintings that have moved you the most...

Undoubtedly, "The Surrender of Breda" by Velázquez is the painting we all would have wanted to paint, or by Alisal "The Surrender of Bailén" (Prado Museum) or Goya's "Execution on May 2", but perhaps the one that most What has always shaken me is “La campana de Huesca”, also by José Casado del Alisal.

You left Barcelona, ​​your city, about seven years ago and you live in Madrid. So fed up with the "procés"? Or so sad...

Did you expect to receive this gold medal of merit from a socialist Minister of Culture from a left-wing government?

Nor did I expect to receive it from a right-wing government, I was pleasantly surprised by the call from Minister Iceta to let me know, it is a tangible demonstration that art is still free of labels and prejudices

You have painted the charge of Alcántara in the Rif, the tercios in Rocroi or a Spanish patrol in Afghanistan in the 21st century. Not bad in a country that often hides its past.

Rather ours is ignorance. We know more about the history of the United States than ours, it is sad but it is so

He has managed to live from his work. What is the profile of the buyer of the work of Ferrer-Dalmau?

They are usually collectors who enjoy history, both national and foreign, people who want to have a window in their house of a historical episode that they are passionate about.