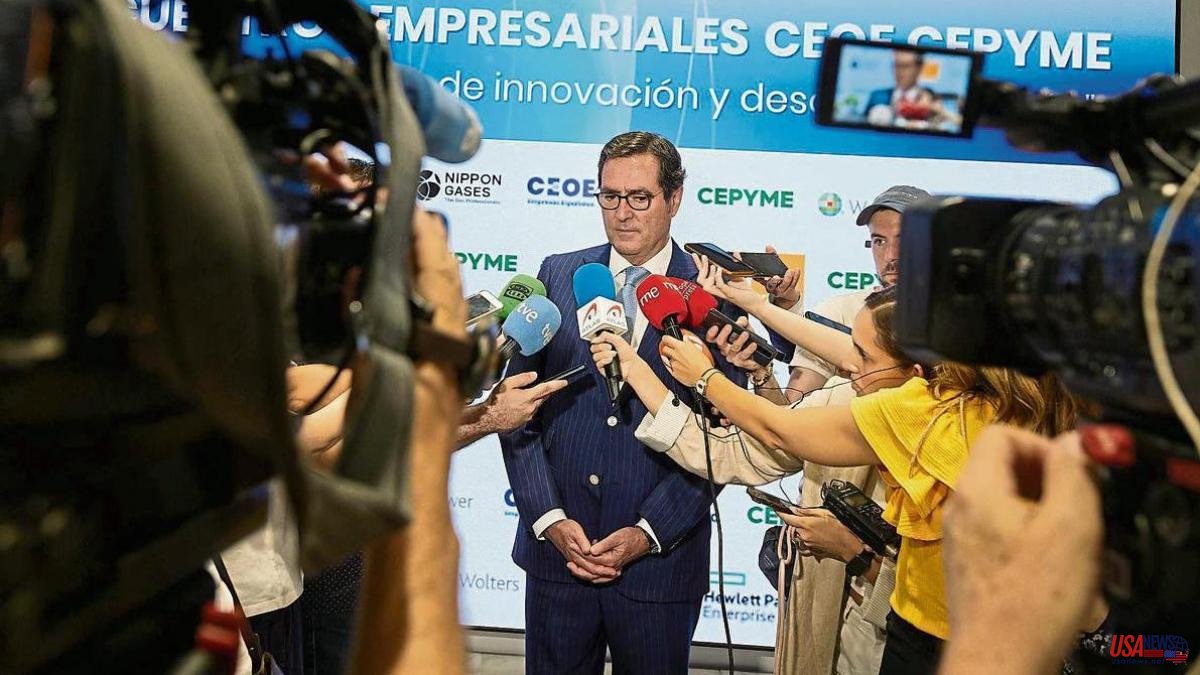 Civil servants and pensions. Those were the two demands that Antonio Garamendi, president of the Spanish Confederation of Business Organizations (CEOE), claimed yesterday in the face of the income pact that the Government wants to promote, as transmitted to them at the meeting held at the Ministry of Economy last Wednesday. A meeting to which, according to the CEOE leader, had been called to analyze the recovery funds.

In any case, Garamendi confirmed the businessmen's intention to negotiate this pact and assured that "they will not leave the negotiating table." That yes, he demanded that the distribution of the burdens of the war that the Government demands be generalized. In other words, just as the unions did on Wednesday, CEOE also wants the Government to make a containment effort in that pact. “It is not only limited to what would be the effect of private employment, employers with unions, which is the Agreement for Employment and Collective Bargaining (AENC), but we would have to talk about civil servants, taxes, pensions... An income pact goes much further and not only affects social dialogue, but the entire political class, the parliamentary arch. We are talking about a country agreement”, Garamendi pointed out yesterday at the end of a business meeting that he shared with the president of BBVA, Carlos Torres, at the CEOE headquarters.

Both the Minister of Economic Affairs, Nadia Calviño, on Wednesday, and the Minister of Finance, María Jesús Montero, yesterday, assured that the Government is willing "to contribute whatever is necessary" to facilitate this income agreement. That yes, Montero specified that the Government will define its positions when the agreement on the salary negotiation “is crystal clear”.

At this point the positions are not close either. The unions threaten strong demonstrations in the fall if the purchasing power of the workers is not guaranteed. Garamendi explains that employers do not refuse to raise wages, but what they are not willing to do is include automatic wage review clauses in their agreements at a time as complicated and volatile as the current one.

He justified his refusal to index wages with the CPI in the "risk" of the second-round effects of inflation. The argument is the same that the governor of the Bank of Spain also used yesterday. Pablo Hernández de Cos once again recalled what the regulator has already reflected in his Economic Report. That the income pact is the key tool to share the inevitable loss of income to which the consequences of the war in Ukraine are leading us. “A wage moderation dynamic and a reduction in trade margins will prevent the appearance of a feedback loop between prices and wages. Avoiding this loop is precisely the priority objective of the income agreement that we have been defending in recent months at the Bank of Spain”, remarked the governor.

The annual report that this body presented on May 18 already contemplated the need for Spain to define an income pact for two years. The Minister of Economic Affairs proposed on Tuesday that his extension be three years. Like the businessmen, Hernández de Cos's proposal includes touching public salaries and pensions.

For now, the macroeconomic table for 2023 that the Government has transferred to Brussels contemplates a rise in public salaries and pensions in line with inflation. Going back on these commitments would have an electoral cost that in an election year like 2023 the government parties cannot afford, unless it can be sold as an exceptional circumstance based on the common good. State Pact, Garamendi calls it.