The pandemic did not intimidate the Quartet Casals when it wanted to launch, hand in hand with L'Auditori, the project that will put Barcelona on the map of excellence in chamber music. 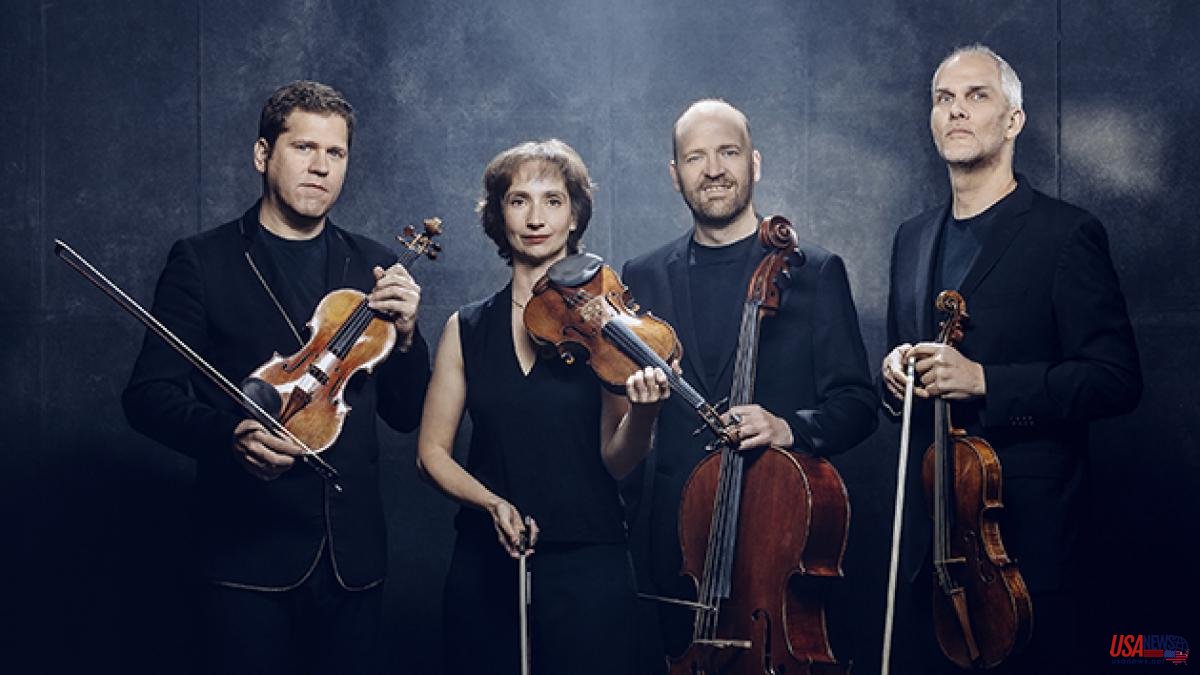 The pandemic did not intimidate the Quartet Casals when it wanted to launch, hand in hand with L'Auditori, the project that will put Barcelona on the map of excellence in chamber music. Even more so, in the string quartet circuit, a genre that represents the "paradigm of the sophistication of the four-voice choral message", in the words of Robert Brufau, director of the Barcelona venue that has had the Casals as its formation for years resident.

If in the first edition of the Biennial of Quartets in Barcelona, ​​in September 2020, the Covid prevented international ensembles from traveling to the Catalan capital -with the exception of the French Modigliani Quartet-, in this second edition that will take place from 17 to September 20 the guest lineup is one of the best on the international scene. And they are not expected to miss the appointment.

The Quartet Casals will host the legendary European quartets Ébène, Jerusalem and Belcea, the American Jack, who is a reference in the interpretation of newly created pieces, and the renowned Spanish ensemble Quiroga. But also of the younger formations, such as Cosmos, which since winning the Heidelberg Contest in 2018 has made a brilliant career, or Atenea, Aris (new Echo Rising Stars) and Maurice, the latter, a specialized Italian group also in contemporary music.

These are "the ones that make us most excited to bring", affirms Arnau Tomàs, the cellist of the Casals. Over five days eight concerts will take place with three world premieres, commissioned by the festival itself, and three national premieres. Well, apart from vindicating the great masterpieces of chamber music, the Biennale wants to be a vehicle to continue promoting them.

Joan Arnau Pàmies, Daniel Apodaka and Octavi Rimbau have created pieces for the occasion that will see the light of day in several of the concerts scheduled this week. Rimbau assures that it is the first time that he has faced this musical form, "the star format of classical music that has always created a lot of respect in me". And he has raised it as a dialogue with tradition "through the filter of microtonality," with the idea of ​​harmony and the four voices that dialogue with each other ".

Because of his art, Pàmies, whose work is characterized by being very experimental, assures that this is the first time in a decade that he has written a classic work: "There is counterpoint, harmony, notes, rhythms and little else," he points out. And also a series of microfugas in the central part, with a cello that plays the basso continuo. It is not in vain that this edition has fugue and fugato as its common thread, as the members of the Quartet Casals, curators of the Biennale, have decided.

All the selected works will make reference or homage to this form, even prior to the birth of the string quartet, since it was Bach -before Haydn- who shaped the cathedral of counterpoint that was The Art of the Fugue. Los Casals wanted to interpret it as the start of the cycle, but due to dates and agenda issues for the rest of the groups, they will play it at the closing ceremony.

"It's Michelangelo's David of musical literature -Arnau Tomàs Realp points out-, more than an hour based on the same theme with many subtleties, so it wasn't bad to combine it with another timbre". That is to say, the harpsichord of Benjamin Allard, who will participate in duets and trios while the Casals perform four voices. This Bach is the last recording by the Casals with Harmonia Mundi that will soon be released, made at the Col·legiata de Sant Vicenç de Cardona.

This concert will have a second part abroad. It will be on November 17 at the Konzerthaus in Berlin, with the collaboration of the Institut Ramon Llull, which participates in the Biennial as well as the Generalitat and the Barcelona City Council, the latter through the Auditori itself and the OBC.

As was established at the I Beinnal de Quartets in Barcelona, ​​the morning concerts dedicated to papa Haydn -father of the string quartet- will continue on the 15th and 16th in Sala 4 Alica de Larrocha at L'Auditori. But there will also be complementary activities with the complicity of other institutions in the city, such as the Ateneu Barcelonès, which on Sunday will host a poetic musical act based on the famous Four Quartets by T.S. Eliot, with readings by the poet Manuel Forcano and the Casals viola player, Jonathan Brown, who will declaim the original version in English.

For its part, in collaboration with Esmuc and Musethica, the project that combines musical excellence and social commitment, concerts and rehearsals will be held in different civic centers of the city, with the Lazarus quartet from Berlin and the cellist Erica Wise. And the films Copying Beethoven, by Agnieszka Holland, and The late quartet, by Yaron Zilberman, will be screened at the Filmoteca de Catalunya (already in October and November), both part of the Filmoteca's Per amor a les Arts cycle. The Quartet Atenea will comment on the first (October 18) and the Casals on the second (November 15).

Robert Brufau emphasized the presence of female composers, such as the Russian Sofía Gubaidulina, guest of the current season at L'Auditori, the Catalan Núria Giménez-Comas, the Japanese Misato Mochizuki and the American Erin Gee. And the Sabadellian composer Benet Casablancas attended the presentation, from whom the third of his six string quartets will be performed.

"I am especially fascinated by the genre, it is the most demanding for the composer -says Casablancas-. And from the point of view of musical life, it indicates the level of quality of the musical society in which we live. Because it is an incredible richness and plurality".

Converting Barcelona into a reference city in the string quartet environment, just like Paris or Amsterdam, is not an easy task. A biennial of quartets is, as Arnau Tomàs assures us, something very daring and specific... but the city of Modernisme has been working for a few years to position itself on the European map of classical music and a project like that of L'Auditori should not be alien to it and the Casals Quartet.

And it is precisely the string quartet that is the queen of chamber ensembles. Because, as Arnau Tomàs explains, unlike other concert bands such as the piano trio, the piano quartet or those that mix strings and winds, this one has its own management and promotion circuit.

"Often promoters bet on uniting three great renowned soloists to put together a trio of excellence, but that cannot happen with string quartets, which is the result of building an instrument with four people. It is a unique body that it requires years of dedication, you can't make a gig out of his repertoire. That's why he has his own circuit within the world of music. Because of stable trios one emerges every ten years, no more", concludes the cellist.

"Indeed, only those who decide to dedicate their lives to him can participate in a string quartet," adds his brother, the violinist Abel Tomàs Realp. "What we do is beautiful -adds Vera Martínez Mehner-; music knows no borders and the quartet is also something very transversal, and that of playing together for 25 years, having conflicts, resolving conflicts... is a social and very great humanitarian".