With 20 minutes to go, the match was getting delicate for Real Madrid, with a draw in the electronics. 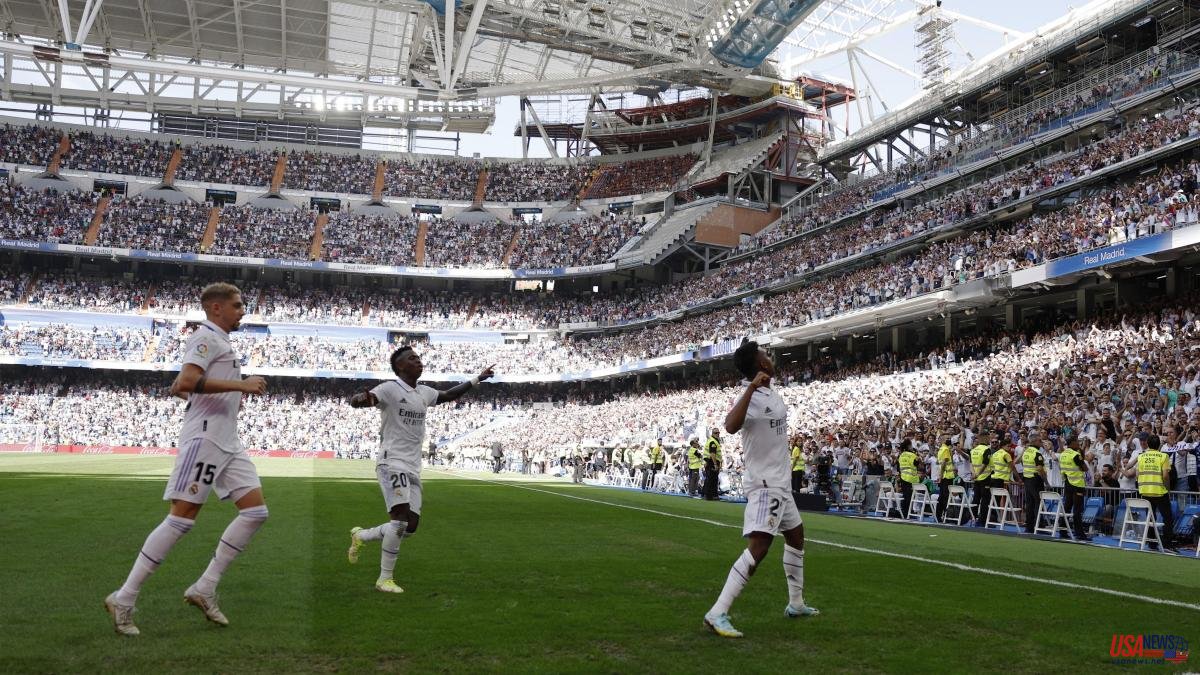 With 20 minutes to go, the match was getting delicate for Real Madrid, with a draw in the electronics. They did not generate enough danger against a Mallorca well planted on the new but punished and dry lawn of the Santiago Bernabeu. Some in the stands missed Karim Benzema. And when the murmur of concern began to be heard in the stands, the Brazilian magic arose, the connection between Vinícius and Rodrygo, who with two beautifully made goals unblocked the game and sealed a victory (4-1) that allowed the Whites retain the leadership of the Santander League.

In a match where the Frenchman lacked clairvoyance in attack, the team was thick in the last meters, the two strikers, one starting from the right and the other from the left, were differentials, the only ones with a spark to get around the vermilion wall. Benzema's absence due to physical problems was not the only one in a Madrid eleven plagued by rotations. Rüdiger took the place of the injured Militão, while Tchouaméni and Modric rested in midfield, replaced by Ceballos. The point of attack was for a willful but unproductive Hazard.

The first minute of the match was a warning of the island team's intentions. Long ball for a Muriqi who got rid of Rüdiger with a big hat and then shot into the hands of Courtois. Javier Aguirre's pupils had a clear plan: order behind, with closely spaced lines and three central defenders guarding the center of defence, and speed in attack with direct play towards the Kosovar striker or on the wings with Maffeo and Jaume Costa.

Saving the initial scare, Ancelotti's men took control of the game. They handled the ball as they pleased in the crown of the area, but it was difficult for them to find a clear play among the sea of ​​rival legs. The solution was too many times the launch from long distance. Ceballos, Kroos on two occasions and Rodrygo tried their luck from outside the area after recovering the ball in which there could have been a foul.

In the first part, the only free verse among so many players was Vinícius, incisive as always although this time off center, more pending the start of friction with Raíllo and Maffeo, with whom he already had his pluses and minuses in the match from last season in Palma. Precisely the Catalan was encouraged after half an hour of play with a great gallop down the right that ended in the lack of the visitor's goal. Kang In Lee put a great cross to the far post and Muriqi, 1.94 meters tall and one of the best overhangers in the League, beat Courtois with a header after getting rid of Mendy's mark.

The goal reinforced the idea of ​​the Balearic Islands, who continued to protect the rearguard until in the added time of the first half they were victims of their own optimism, too happy in attack. An unforgivable mistake against a lethal Madrid with spaces. The whites recovered the ball and Valverde, 50 meters from the goal, built a work of art that perfectly combined power and precision. In a portentous driving, the Uruguayan was overtaking rivals as if they were cones and when he reached the edge of the area he connected a shot with his left foot to the top corner. Vinícius created enough space for his teammate by dragging Raíllo, who tried to rectify but was too late to cover the shot.

The emotional reinforcement for the goal did not change the scenario in the second half, with Mallorca still relatively comfortable defending the area and Madrid little inspired in the last pass. Without Benzema, Hazard barely generated, at all times engulfed by the accumulation of players. The islanders were even able to get ahead again with a good move down the left that Antonio Sánchez, totally alone inside the box, sent it out.

Like so many times against Madrid, the visitor's decision was preceded by a white goal, again thanks to individual talent. Unlike Valverde, Rodrygo shot with skill to eliminate rivals in three quarters of the field until he reached the area, where he had the lucidity to assist Vinícius who rounded off the play with a masterful dribble over Valjient and a good definition against Rajkovic.

With the score in favor, Madrid paused the game, even comfortable leaving the initiative to the vermilion to seek a counterattack. Vinícius then wanted to collect on the pending quarrels with Maffeo and Raíllo, while his compatriot Rodrygo continued to be sweet, focused on the goal, and scored another great goal in the 89th minute after sitting Nastasic and Raíllo with two dribbling Already in injury time, Rüdiger, at the limit of offside, caught the fourth goal by finishing off a set piece at the far post. Too much punishment for a Mallorca that, in the absence of Benzema and on a regular day for the Whites, succumbed to the talent of Vinícius and Rodrygo.

Incidents: Match corresponding to the fifth day of LaLiga Santander played at the Santiago Bernabéu stadium before some 55,000 spectators.