The brand new Chopin piano award: "I try not to be the visible face of the work I perform"

Last year he won the third prize in the Chopin Competition held in Warsaw, the most prestigious of those dedicated to the piano, and when the war broke out in Ukraine, the Polish programmers did not hesitate to call him to replace Russian interpreters. 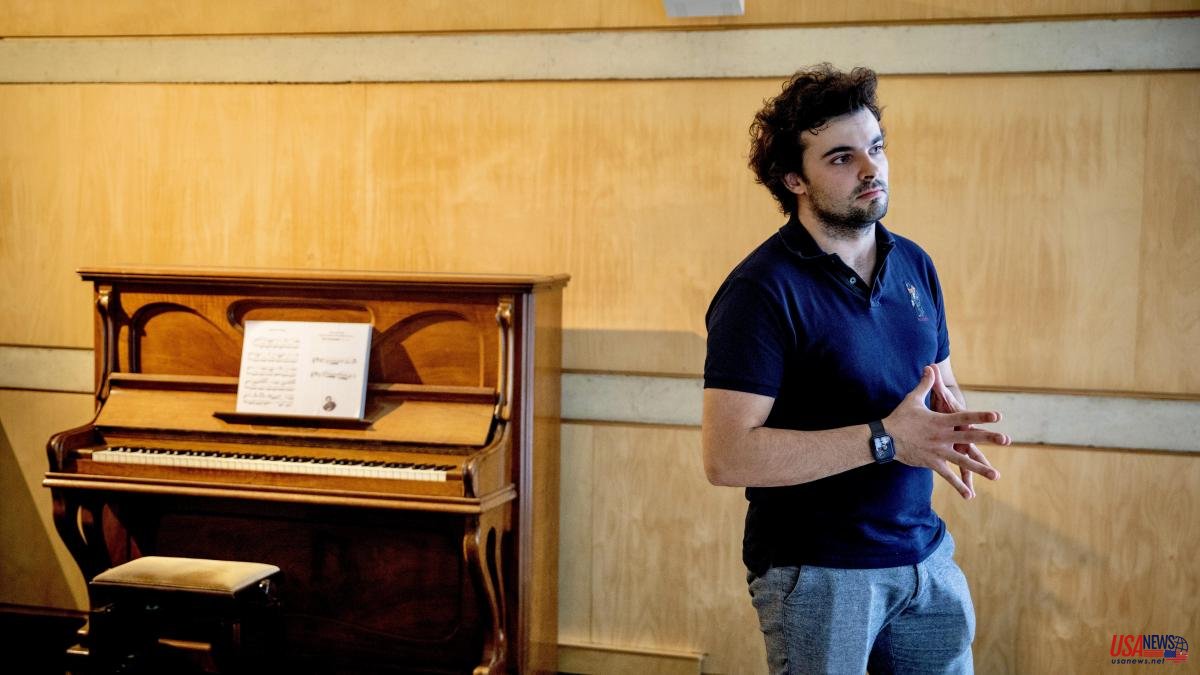 Last year he won the third prize in the Chopin Competition held in Warsaw, the most prestigious of those dedicated to the piano, and when the war broke out in Ukraine, the Polish programmers did not hesitate to call him to replace Russian interpreters. Perhaps they saw in him a Soviet quality in the honest way he approached the works. With a total vocation for service. Because Martín García García (Gijón, 1996) is not just a young man with extraordinary digital skills...

The new phenomenon of piano is Spain has been trained with Russian teachers, with all that this implies. He is an artist forged in the search for depth. Something that he will have the opportunity to demonstrate this Friday and Saturday in his debut at L'Auditori de Barcelona, ​​as a soloist with the OBC. He performs for the first time the Piano Concerto no. 1 by Tchaikovsky under the baton of the African-American maestro Roderick Cox, who will complete the program with the Concerto in F by Béla Bartók and Requiem for Strings by Toru Takemitsu. La Vanguardia talks with the pianist during his rehearsals at L'Auditori. Next week he makes his Carnegie Hall debut.

In a few months he won the Cleveland competition, appeared at the Rubinstein, at the Liszt in Hungary... and won a third Chopin prize, being also awarded the special prize of the Warsaw Philharmonic for the best interpretation of a concert . Is it time to define your own personality at the piano after having been recognized in this way? What will his Tchaikovsky be like?

Everybody wants to do something with the Tchaikovsky Concerto. I do not want to do anything. My idea is always to maintain a sense of purity about the work of art, I try to present a piece in such a way that I am not a visible face of it. Not that I'm going to put a banner in my face that says 'don't see me', of course, but I'm not the purpose of the concert: Tchaikovsky is. And let the public hear what this man wanted to convey to them.

And is there a technique to achieve that transparency?

No, just a lot of discipline and not forgetting that there is no goal in my work. My teacher, Galina Eguiazarova, told me. You should not try to achieve this transparency, it is an impossible ideal, but you can take this road and continue on it, and it will become better and better. That is the idea of ​​internal silence, not that melodrama that seems to be in everything today. Tchaikovsky's is romantic music but not in the sense of romance as we understand it today. It's a different kind of romance. Everything happens through Tchaikovsky's personality, not through ours. That's why we call ourselves interpreters.

In today's world in which the market requires performers to have their own personality... How much does it owe to Eguiazarova to have been able to develop in an incorruptible way?

Well, a percentage very close to one hundred percent, haha. More than anything because of that method of work and because of the way he invited me to relate to art. She was a teacher who never got into technical subjects, she always said: those technical subjects are for when you are children, now we are talking about other things. Everything was faced to a musical theme, deeper.

Did he send you to visit museums?

If you started two measures of any piece, he would tell you, with his completely Russian accent, because he hardly spoke Spanish, I don't even know how we communicate... he would tell you: "You go to a museum, it can't be, you no culture, let's museum". And many things like that. "Come on, you read Dostoevsky, Tolstoy, don't you know?" The base of the art is not in playing 88 keys and oh, how good, how I feel it inside me!

How old were you when you were your teacher?

From 14 to 22. And a teacher-student education, no looking at the clock when we teach. Two, three hours, I had four hour classes many times. The first two years it was in her house, and then she said good words at the Reina Sofía School so that they would admit me. She chose her students...until she retired this year, she no longer teaches. How lucky I was not to catch it five years later.

How would you define your way of seeing the world after eight years under this influence?

It affected me for everything, yes. I would say that I see it in a very Soviet way, but from the point of view of people who lived through Soviet times and know what the extreme of terror really is, that she lived through it. I feel very short-legged in the commercial world. I see it at the other extreme. There should be a balance but there isn't.

I work hard, art does not admit interested adulterations...

Precisely all that, yes. Many times I go to a concert, which I don't go to many -I wish I could go see Jordi Savall's concert but I have to rest-, and I see the artist leave the concert so happy... I am not capable of leaving happy a concert. If you have an ideal and you really think you can achieve it in a concert... I don't know. We are all in the audience for that, waiting for some kind of ideal to enlighten us.

How do you get out of a concert?

As if I had been hit in the face with a frying pan. Stunned. Because all the dedication and discipline of a lifetime goes into each of the concerts I give. It's what I'm preparing for and that's where I spend all my energy.

Who was Tchaikovsky according to you?

A man very tormented by himself. There is a lot of talk that he was because he was gay and society oppressed him, but no, he tormented himself. He believed that he was a sinner, that he was dirty. And only that fact haunts him all his life. Each of the sentences are five, six, seven, eight pages of the same motif repeated, and repeated. A troubled mind.

Who is addressed in these pages?

He addresses himself, not even a god associated with some kind of orthodox religion. It's just that he doesn't even make the slightest effort to put something religious related among the things of Russian folklore that he does use.

And in that Concert no. 1 piano, how is it there?

It seems more like an exercise as if he is not sure what he is composing. As if it were a mental and pen exercise to build such a large piece... And he becomes a genius but he doesn't know how talented he is.

In this same sense... who was Chopin?

What role would you say beauty plays in the art of music?

Romanticism reaches that culmination of thinking of art as what man produces through himself, as a crucible in which the soul of man is placed inside. And only the man, nothing else around. It is not society, it is not God, it is not the bourgeois who tells you that you have to work. He is the man for the man. That is why classicism, romanticism, post-romanticism... man for man works and will continue to work for centuries. Then things went down other paths. That is why people feel that it is beautiful, because they feel identified by themselves, not by anything that surrounds them.

How do you get along with your land?

I left Gijón when I was 14... I got into the piano because my older brother was studying it. I was lucky to find in Gijón, in a school called Tchaikovsky, by the way, my teachers who also came from Moscow.

And does criticism find any parallelism for you with Russian pianists?

Yes, but if we look again at the history of music, we see that the whole school that we call Russian affects 80% of today's pianists, whose musical family tree leads to someone from Moscow.

Being the third winner is a pity or is it magnificent?

I'm almost thankful for it. And I say almost because if I look back, we begin to see now, five or ten years ago, the great winners of contests of the last twenty years. What happens there? There are too many contests, too many winners, and too much purpose for putting those winners in a place that they will eventually have to win.

How did you take that to replace the canceled Russian interpreters in Poland?

It is a nationalist theme. It is what it is. I also understand it when you've been invaded a gazillion times in your recent history, as is the case in Poland, and you have infrastructure that means it takes two hours to cover 90 kilometres.