The books of 2022 | The essentials in comics

It has been on the list of best-seller books in France for a year. 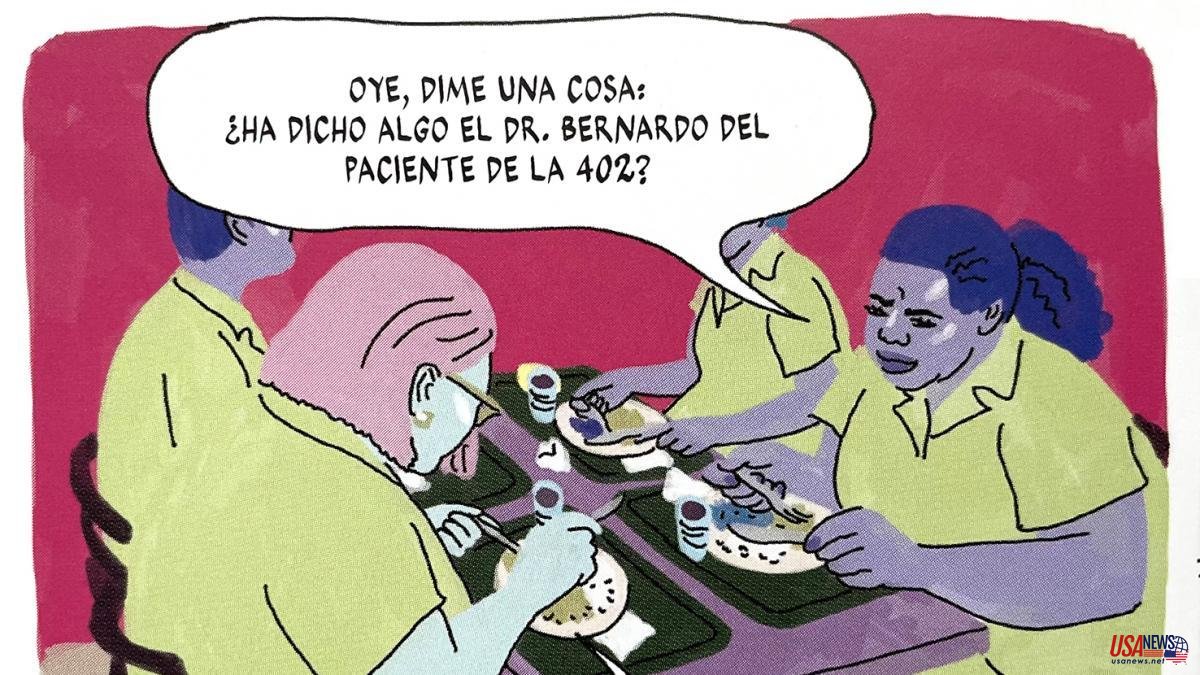 It has been on the list of best-seller books in France for a year. This is World Without End / El món sense fi (Norma Editorial / Finestres), a graphic essay on climate change signed by the climatologist Jean-Marc Jancovici, author of the carbon footprint concept, and the prestigious cartoonist Christophe Blain. Together they describe how the energy miracle has led to a huge climate crisis. Jancovici's thought, well argued although not without controversy, evokes economic, ecological and social issues to question what he defines as "a system that is only stable in expansion". A work that seeks to shake consciences so that the world of the future is truly a world without end.

In the same line of environmental concern is Green Algas. The forbidden story (Astiberri), where the journalist Inès Léraud and the cartoonist Pierre van Hove investigate the mysterious death of people and animals on the beaches of Brittany and, pulling the thread, uncover a political and financial network that has its roots in the processes of intensive agriculture. A first-rate, rigorous and impressive journalistic report.

And adopting the tone of a dramatized documentary, La cuenta atrás (ECC), by Carlos Portela and Sergi San Julián, deals with the causes that led to the Prestige catastrophe in 2002, when "strings of plasticine" led to an uncontrollable oil slick that caused an environmental catastrophe. Mixing the social chronicle with the report, this comic presents an original structure: it starts with the end and goes backwards –in the form of a countdown– to the causes that caused the disaster.

From the French market comes the delicious new album by Catherine Meurisse, one of the most interesting active cartoonists. The young woman and the sea / The young woman and the sea (Impedimenta / Finestres) recounts the author's stay in Japan to soak up her culture, rediscover herself, and transform her drawing. Her fresh and cartoonish graphics are combined with an extraordinary work of plastic recreation of nature and works of art sublimated by the beautiful color of Isabelle Merlet. A delicate and bewitching work like a Japanese print.

And from Japan, precisely, comes an alternative and experimental manga by Susumu Katsumata, Red Snow (Gallo Nero), an anthology of bittersweet stories that combine a crude description of the rural world of the last century mixed with abundant mythological references.

Among the works of fiction currently located, we highlight two titles. In Last Weekend of January (Diábolo) Bastien Vivès shows that he is one of the cartoonists who best masters the art of storytelling. Few can control the progress of this love and infidelity story between a comic book artist and an attractive woman who visits the Angoulême comic book festival with her husband with such precision. Vivès dominates the tempo and endows any gesture or image with a deep narrative sense. Precisely, during the last edition of the Angoulême festival, the Brazilian cartoonist and screenwriter Marcello Quintanilha won the award for best album for Listen, beautiful Márcia (Astiberri), a work that combines the social portrait of the favelas in Rio de Janeiro with a plot of corruption and drug trafficking in which the figure of Márcia stands out, a nurse turned mother who has the courage to save her daughter. An unforgettable character for an energetic and emotional comic, sealed with a violent and radical color.

Less radical but equally expressive is the range of colors in The Living (Garbuix Books): green, purple and orange on Simon Roussin's light line drawing. The story starts in 1940 and tells of the creation of the first networks of the French resistance movement against the Nazi occupier. The script by Raphaël Meltz and Louise Moaty is an exercise in goldsmithing as all the texts and dialogues have been taken from articles, letters, speeches or interviews by the protagonists. There is nothing added. The ingenuity of the scriptwriters has been to select them carefully and combine them in such a way that they acquire a vigorous narrative and testimonial value.

We went from collective to individual biography. The screenwriter Julien Frey and the Valencian cartoonist Nadar publish Fatty. The First King of Hollywood (Astiberri), portrait from the life of actor and director Roscoe Arbuckle, who in the 1920s was more famous than Charlie Chaplin and Buster Keaton. Everything changes when he is falsely accused of the rape and death of an aspiring actress and is condemned by the yellow press, evicted from the movie studios and turned into a monster. Admirably written and drawn, this comic aptly delves into both his personal drama and the behind-the-scenes of silent movies.

Josephine Baker (Salamandra Graphic / Finestres) is the monumental biography of the screenwriter José-Louis Bocquet and the illustrator Catel Muller about the story of the famous dancer and cabaret singer who broke taboos despite being a woman, black and from humble origins. She was born in the United States but it was Paris that raised her as a star from 1925. For this reason, later, as a sign of gratitude, she agreed to be a French spy against Nazi Germany. In her life, characters like Man Ray, Hemingway, Colette or Martin Luther King cross paths, making this book the portrait of an era.

Closer in time is the biography Rara avis (Norma Editorial / Símbol Editors), where the screenwriter Raúl Deamo and the cartoonist Tyto Alba vindicate the figure of the primatologist Jordi Sabater Pi beyond being the discoverer of the only known albino gorilla, the popular Snowflake. A self-taught scientist, Sabater Pi learned the language of indigenous Africans, became interested in their culture, studied primates and other animals, and reflected his discoveries with detailed drawings.

With a curious notebook format, as if the book were actually a personal diary, Pénélope Bagieu recalls flashes of her childhood and adolescence with lots of humor in Los estratos / Els strats (Norma Editorial / Finestres). Bagieu casually evokes her relationship with her physique, her first great love, a false ski medal or the birth of her commitment to feminism. There are moving moments and others, simply anecdotal, but all of them –he emphasizes– have contributed to making her the person she is today. A quick and enjoyable read. One of the funniest and most intelligent comic books of the year.

Halfway between the hallucinated autobiography and the most absurd fiction comes the new graphic novel from Zerocalcare, a best seller in Italy, Skeletons (Reservoir Books) combines the fast-paced thriller with the novel of formation. A countercultural story, sometimes violent, other times funny and emotional. A comic told with a vigorous narrative rhythm and engaging dialogues.

Pioneer of the autobiographical comic when this label did not even exist, Carlos Giménez is the author of one of the starkest portraits of post-war Franco's Spain through the daily life of the children who were in the homes of the Social Assistance. A monumental historical fresco that now concludes with the ninth installment: Paracuellos. A 'home' is not a house (Reservoir Books). And continuing with the national scene, it is worth highlighting the fun An afternoon with Himmler (La Cúpula) by Alfons López, who signs here the drawing, the script and the –magnificent– color of this comic in which he recreates classic comic book characters like Manuel Vázquez's Hermanas Gilda or Conti's Carioco alongside movie characters like the Marx Brothers.

Glenn Ganges arrives from the United States in: el río de noche (Salamandra Graphic), by Kevin Huizenga, an example of a formalist graphic novel where playing with the comic medium itself is part of the appeal of this story in which a man with insomnia he reflects on his life, his marriage and the passage of time through multiple digressions. Huizenga is influenced as much by the modernity of Chris Ware or Richard McGuire as by comic strip classics such as Gasoline Alley. From the United Kingdom, Tom Gauld presents a compilation of his witty strips in The Librarians' Revenge (Salamandra Graphic) and confirms that no one knows how to portray the world of books, readers and literary fashions with as much humor as he does.

In the chapter on reissues, El eternauta (Planeta Cómic) stands out, an essential work of universal comics in which screenwriter Héctor Germán Osterheld breathed elements of denunciation and reflection into popular comics, opening the doors to what we now call graphic novels. It is published in an extraordinary edition that recovers the drawing of Francisco Solano López as never seen before. Hergé's first album, Tintin in the country of the soviets (Youth) was also published in Spanish in a colored edition in 2016; and a compilation of pages, covers and some previously unpublished works by Josep Escobar, Carpanta 75 aniversario (Bruguera), a comic book classic that humorously portrayed the post-war famine.