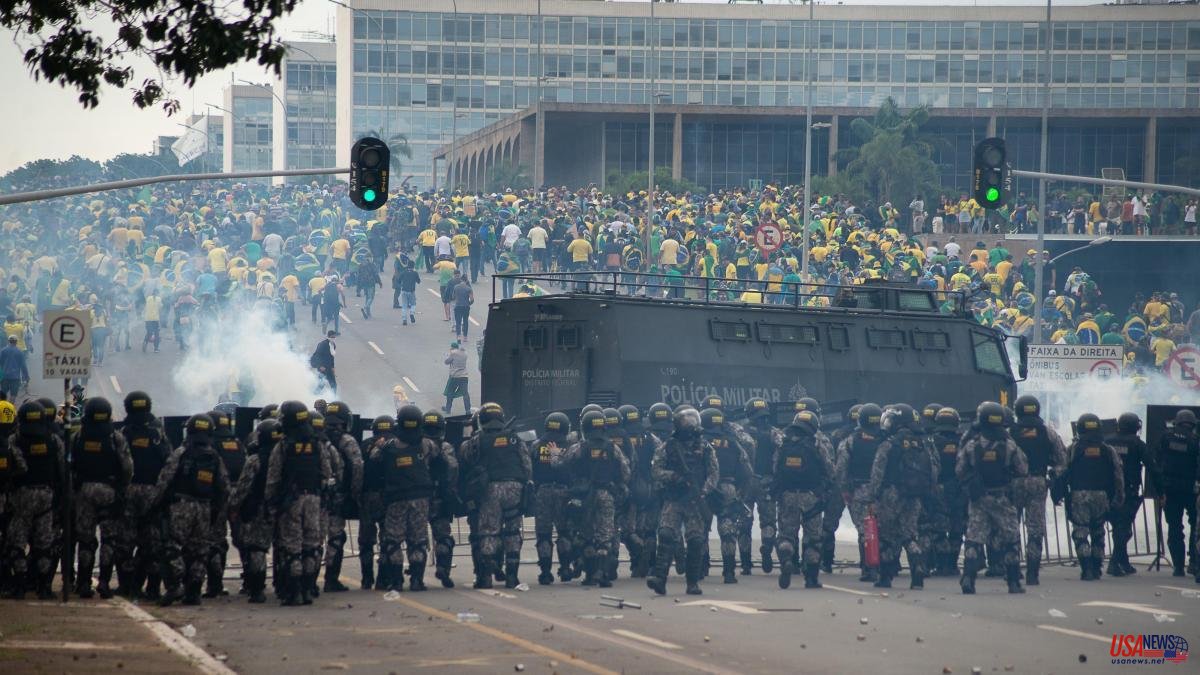 From January 6, 2021 in Washington to January 8, 2023 in Brasília. A horde of pro-coup followers of former President Bolsonaro reproduced this Sunday the script of Turmpism from two years ago, although it did so in triplicate, taking advantage of the planned urbanism of this laboratory city. On an unforgettable afternoon of democratic opprobrium, thousands of opponents of the current president, the leftist Lula da Silva, occupied for about four hours the most emblematic square in the country, that of the Three Powers to enter and vandalize the offices of the presidency, the parliament and the main judicial body. The action, branded as "terrorist" and "coup" by the Government, was facilitated by the executive of the Federal District, related to the Bolsonaristas. At the beginning of the early hours of this Monday, according to European time, there were already more than 400 detainees.

The images that from the first hour of the afternoon in Brazil flooded the entire planet were most shocking. It could look like a pilgrimage, as some local analysts said, a ticket to a concert or, surely better, the celebration of a victory for the canarinha, the soccer team. The people who wandered through the access ramps to the headquarters of the country's greatest institutions carried national flags and were mostly dressed in soccer team jerseys. Appearance was deceiving. It was an insurrection by supporters of former President Bolsonaro who, after his defeat in the October elections, rejected the result and even called for a coup.

Precisely, a good part of the assailants came from the camp formed for more than two months in front of the Army headquarters, demanding their intervention, as occurs in front of other barracks in the country. According to the Estadão de São Paulo, the Bolsonaro groups had been preparing the insurrection on Sunday since last day 3, through messages on social networks, to bring protesters from all over the country to the capital, with expenses paid. According to Justice Minister Flávio Dino, who headed the crisis cabinet while President Lula was on an official trip in the state of São Paulo, police have seized 40 buses that were used for the action and are identifying the funders.

Flávio Dino offered essential information in his press conference. On Saturday the Government of Brasília modified the rules that restricted access to the Three Powers square. As he recounted, he complained to the Federal District authorities, who assured that everything was under control. The Minister of Justice was careful not to blame Governor Ibaneis Rocha directly, since he thought that perhaps he was badly advised, to end up making a catastrophic decision. In the spotlight is the former security secretary of the capital, Anderson Torres, who was the last minister of this portfolio and of Justice with Bolsonaro and who was dismissed by the governor on the same Sunday afternoon.

The mob was heading towards the three main institutions of the country and some police officers were taking pictures of them. The horde entered and all kinds of acts of vandalism took place that are being evaluated and shown on television. There are images of the chamber of the Chamber of Deputies with destroyed seats, damaged works of art, multiple rooms with damage, offices of destroyed judges, such as that of one of those most hated by Bolsonaro, Alexandre de Morais, and even judicial files wet with urine. .

"Three hours of nonsense." This is how Minister Dino summarized what happened during the seizure of the buildings of the three highest institutions in the country. "In an hour the federal police solved it," added the head of Justice. It was after Lula da Silva's press conference from the city of Araraquara, in the state of São Paulo, which suffered recent flooding. The president gave an account of the decree that he had just signed for his government to intervene in the Federal District in order to take over security powers, in what in Spain would be a partial application of article 155 of the Constitution.

Shortly after, a radical change of decoration began to be seen in the images broadcast on television in the Plaza de los Tres Poderes. The insurgents no longer roamed freely with some policeman, sometimes on horseback, in the middle. The forces of order acted forcefully, with tear gas, evicted the square and later did the same with the three buildings. It was already beginning to get dark when the first long lines of detainees were seen coming down the same ramps they had climbed hours before, handcuffed.

According to the minister, there are about 200 detainees "in flagrante", committing the crime, which leads them to prison, while the governor raises the number of arrested to 400. They can face sentences of between twelve and twenty years in prison, for serious crimes such as the coup d'état and attacks on public property, among others. Lula anticipated that they will be punished with the harshness corresponding to their actions, while assuring that he will go to the bottom of the investigation. The president did not stop pointing to his predecessor, the "genocidal", as he refers to Bolsonaro for delaying vaccination in the pandemic. From Orlando, hours later, Bolsonaro distanced himself on Twitter from the violent acts and criticized the attacks of his successor.

On the scene of devastation of the Three Powers, Bolsonarismo remains divided and criminalized, although it is still there. Lula's government appears as the victim supported by the international community, although it has also been worn down by what some analysts and politicians consider to be too soft a position with regard to the pro-coup camps. January 8th will go down in the history of Brazil as the day in which for a few hours the Rule of Law disappeared right in the places from which it emanates. It was a transitory situation, brief and without victims, but of extraordinary gravity.