The position of the conservative members of the General Council of the Judiciary (CGPJ) to postpone the election of two magistrates of the Constitutional Court is going to force President Carlos Lesmes to call a plenary session in the coming days, presenting himself an alternative candidate. 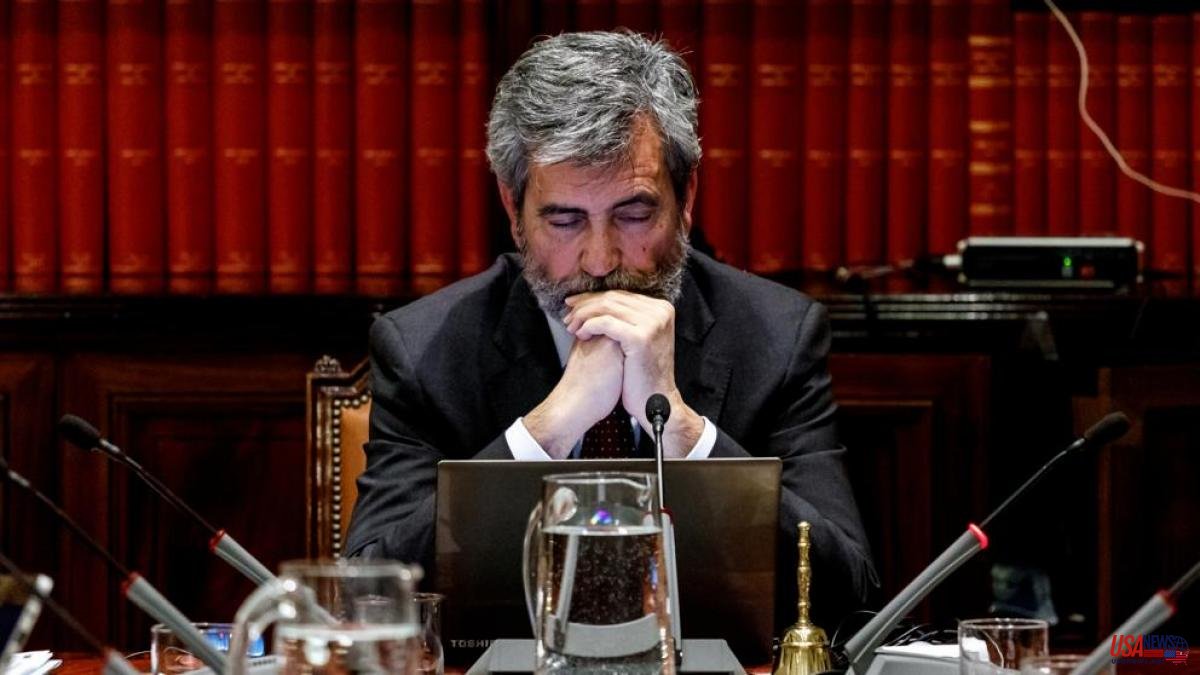 The position of the conservative members of the General Council of the Judiciary (CGPJ) to postpone the election of two magistrates of the Constitutional Court is going to force President Carlos Lesmes to call a plenary session in the coming days, presenting himself an alternative candidate.

In order for the two candidates for the TC to move forward, twelve votes are needed. The eight progressive members would be willing to carry out this plan, which would be joined by two conservative members who have already made it clear that they are not the hard line of the rest of the group. Together with the vote of Lesmes himself, the president would only have one member left to carry out the names.

This option looks increasingly feasible after today the negotiating table between the conservative and progressive bloc has ended again without managing to get a candidate out of the conservatives. They have explained that the "intense search" for candidates carried out among members of the Supreme Court "has been unsuccessful, so far up to three times."

Progressives see a clear attempt by this group to prolong the situation and avoid making these appointments until the government reaches an agreement with the PP to renew the body of judges itself. In fact, Council sources have slipped that they have indications that PSOE and PP could begin to have rapprochement although they recognize that with the debate of the budgets in the Congress of Deputies right now it would not be the priority.

Conservative members want to gain time to certify whether the visit of the European Union Commissioner for Justice, Didier Reynders, has had an effect between the two main parties, which have maintained a blockade on the renewal for almost four years.

But the patience of Lesmes and the progressives seems to be running out because they consider that they cannot continue to break the law, which marked them until September 13 to appoint two TC magistrates. In a statement, the progressives have clarified that "in view of the situation, without the prospect of any immediate agreement, we have decided to inform the president of the CGPJ of the lack of a time horizon and concrete work of the negotiating commission, and start from today, the exploration of other alternative ways of immediate agreement throughout today, tomorrow and the day after, with the will to comply in the shortest possible time”.

Council sources explain that these alternative ways would be to try to convene a plenary session on Friday or next week to present two candidates from outside the conservative bloc. From this block they ensure that among the eight members that make it up they are firm and seamless, so they rule out that any of them will go to Lesmes' side.

Meanwhile, Lesmes' resignation hangs in the balance. He has already said that if he does not see any progress among the political parties to unblock the renewal of the CGPJ, he will leave the institution, given the serious damage that is being created.

The decision that Lesmes must make is whether to leave without having tied the appointments in the TC. Sources from the body assure that if the president resigns without reaching a consensus with these two appointments, the conservative bloc will leave him paralyzed 'sine die' until there is a renewal of the CGPJ.

This situation could lead to the paralysis of both the Council, the Constitutional Court and the Supreme Court, which in a few months will see its chambers reach half of its magistrates as they cannot make appointments to replace those who are retiring.

After last week's plenary session, the Council agreed that if today's negotiating table meeting ended without an agreement, it would wait until the 13th to call a new plenary session. The question now is whether Lesmes will still continue on those dates.