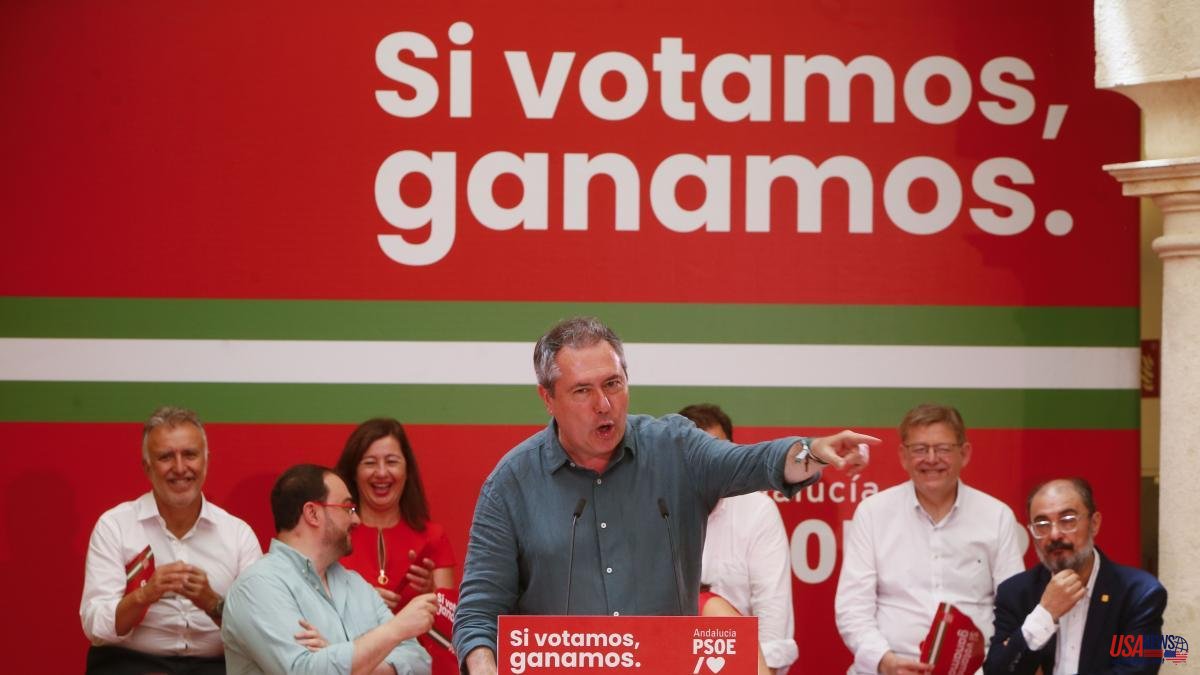 "Andalusia is socialist, it just needs to be mobilized again," the government spokeswoman, Isabel Rodríguez, encouraged yesterday. However, PSOE leaders admit that recovering the Junta de Andalucía next Sunday is "mission impossible." But the low expectations and the poor demographic forecast with which the socialist campaign began could give Juan Espadas, if the progressive electorate wakes up –and wins, to begin with, the heat–, a margin of growth that avoids repeating the image of defeat harvested in Castilla y León, last February, and above all the electoral catastrophe registered in Madrid in May 2021.

In the PSOE they assume that if the scrutiny of 19-J is very damaging, it could have a strong impact on Pedro Sánchez. But it will not benefit the socialist regional presidents either, who, before a year has elapsed, in the elections of May 2023, will opt for their own re-election. So up to seven of them went yesterday to support Swords in an act in Córdoba, to try to clear, among all, the black clouds and, as the candidate himself said, "turn this around", in search of a "comeback ”. And to try to stop, also among all, the change in the political cycle in all of Spain – with a final stop in Moncloa – promoted by Alberto Núñez Feijóo at the head of the Popular Party.

“What we are playing for is not only very important for Andalusia, but for all of Spain”, recognized the Valencian Ximo Puig, who demanded that the Andalusian socialists “sweat the shirt until the end”. "I don't want to get dramatic," warned Extremaduran Guillermo Fernández Vara, but he acknowledged that the moment is "critical." "There is much more at stake than you imagine," he warned the Andalusian socialists, whom he urged to ignore the unfavorable polls. “To hell with the polls!” demanded the Asturian Adrián Barbón. And all claimed to overcome discouragement and resignation to those who invite these polls.

The Aragonese Javier Lambán tried to inject energy into the once almighty Andalusian PSOE, so that it could take flight three and a half years after being shocked when losing the Board. Lambán appealed to Felipe González, Alfonso Guerra and even Susana Díaz, to remember that the social democratic PSOE was born in Andalusia, and then "it spread to the rest of Spain and served as a guide to all the rest." “Andalusia is, par excellence, Spain”. And Andalusian socialism, he went on to add, is the spinal cord of the PSOE.

Extremaduran Vara pointed out that “nothing of all the important things that happened” in democracy, with the governments of González, Zapatero and now Sánchez, would have been possible without the support of Andalusian socialism. “Andalusia has always been an echo of socialism, and we need its policies to continue to be a benchmark in Spain”, agreed the Balearic Islands Francina Armengol.

In some territories governed by the PSOE, however, they disassociate the Andalusian result next Sunday from the electoral struggles in the regional ones next year. But no one denies its impact on the political scene in Spain and they warn that the main victim of a bad result on 19-J would be, thus, Pedro Sánchez himself.

Meanwhile, the Second Vice President of the Government and Minister of Labor, Yolanda Díaz, also joined the battle for the South in an act that she shared with the candidate for Por Andalucía, Imma Nieto, and with Íñigo Errejón in Malaga. The day before she had participated in Córdoba in an act with Ione Belarra where she assured that she is "willing to take a step to win Spain"

The vice president and the leader of Más País, who have decided to support Díaz's new political adventure, were full of praise for each other. “We have done many things together” although “people don't know it”, revealed Díaz, before predicting that with the support of Errejón “the best is yet to come”. And the leader of Más País highlighted Díaz's “constancy” and “calm but stubborn perseverance”, in the face of “superficiality, “noise” and “shouts” that are in fashion. The intense embrace between the two left the one Diaz and Belarra exchanged the night before as a mere greeting.

At the same time as the Malaga rally, the former leader of Podemos, Pablo Iglesias, presented his latest book, Truths to the face, in Cádiz, together with the candidate of Por Andalucía for this constituency, Juan Antonio Delgado. In that act, Iglesias expressed his support for the candidacy of the space to the left of the PSOE and for the leaders who were at the Malaga rally.