The awkward anniversary (for Russia) of the Soviet Union

If we lived inside a uchronic novel from pens as magnificent as those of Philip K. 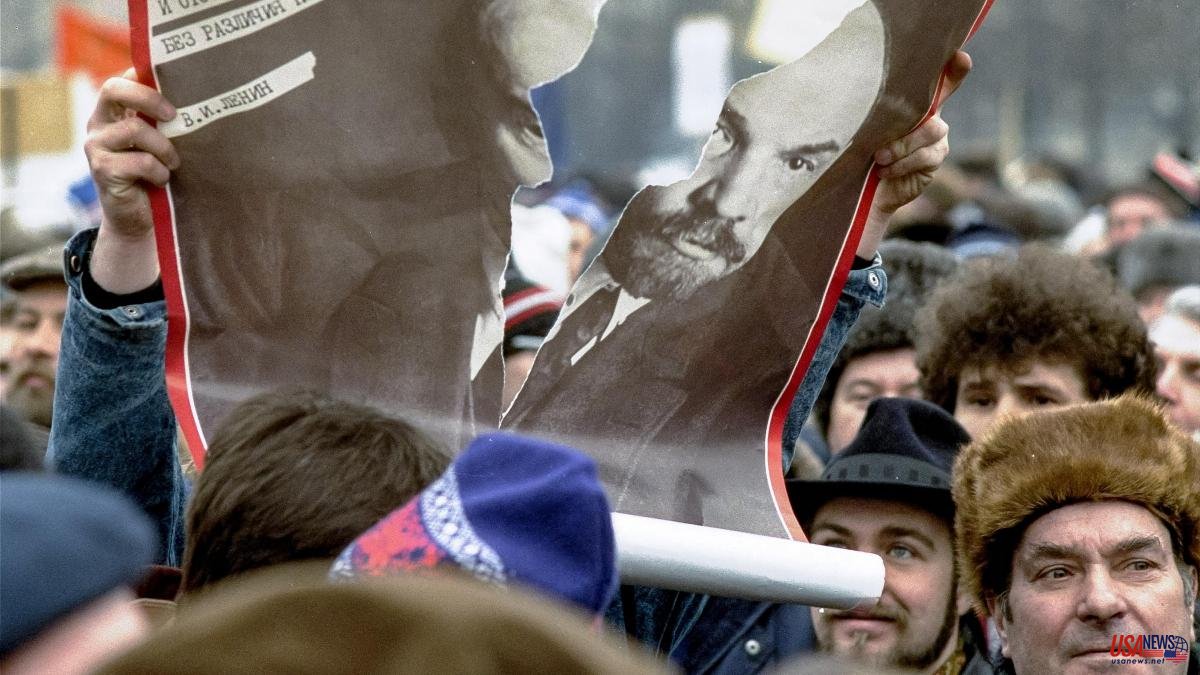 If we lived inside a uchronic novel from pens as magnificent as those of Philip K. Dick or Harry Turtledove, Moscow would be celebrating today. There would be parades, flags, I don't know if tanks, missiles or cosmonauts. But surely there are many posters with factory workers and peasants marching magnificently in the hope of building a new country, the one that the Bolshevik leader Vladimir Lenin founded on December 30, 1922. But we live in the midst of reality, with Russia. bogged down in its conflict with Ukraine, isolated by Western sanctions and seeking a commercial niche in Asia for its oil and gas. Too many worries for the Kremlin to think about celebrating the centenary of the birth one hundred years ago of the Union of Soviet Socialist Republics.

To create that new country, the Bolsheviks had to wait to win the civil war and secure the territories that had been part of the Russian empire. A little more than five years passed from the October Revolution until representatives of four socialist republics that had been formed, Russia, Ukraine, Belarus and Transcaucasia (Armenia, Azerbaijan and Georgia), announced the formation of the USSR.

The “new homeland” was born with great hopes. The revolutionary leaders promised freedom and rights to the proletariat, to participate in the decisions of the country through the councils (soviets), equality and a great adventure: to build a great country together.

For seven decades, the USSR was an example for other countries in the world (future communists and non-aligned) and, although its politicians could not recognize it, a catalyst in the struggle of minorities and women in Western countries. He achieved indisputable technological successes, played a key role in defeating Hitler's Germany in World War II, and led the conquest of space, launching the first artificial satellite (1957) and placing the first man in orbit (Yuri Gagarin, 1961).

However, contradictions soon appeared. After Lenin's death (1924), Joseph Stalin seized all power and established strong centralization in the following decade, with brutal repression that in 1937-1938 alone left 1.2 million dead.

The gulag's network of labor camps was in full swing. Before, collectivization was imposed and the Holodomor caused in 1932-33 four million deaths by famine in the Ukraine.

So to remember the 100 years of the USSR is not only to celebrate the end of tsarism, the revolution of the proletariat, the victory of the reds against the whites and the birth of a new hope. It is also to bring to mind seven decades of the Soviet regime with more shadows than lights. And that for today's Kremlin is not a tasteful dish.

In 2005, Russian President Vladimir Putin publicly said that the end of the USSR, which occurred in December 1991, was "the greatest geopolitical catastrophe of the 20th century." This statement, the most remembered by the head of the Kremlin regarding the Soviet system, is nevertheless part of the contradiction in which Moscow has always found itself with respect to its past.

Since then there have been many speculations about Putin's supposed intentions to return to the USSR. But both he and his spokesperson, Dimitri Peskov, have said several times that this is not possible.

“The representatives of the then party elites decided on the collapse of the USSR. This tore sharply, divided our society, became a national catastrophe (...). But it doesn't matter anymore. The Soviet Union does not exist, there is no going back. And Russia today does not need it either. We do not aspire to that, ”said the Russian leader last September.

Those who do celebrate the anniversary in Russia are the direct heirs of the USSR, the Russian Communist Party.

“Lenin managed to come up with an idea that made it possible to meet peacefully and democratically in a meeting and vote, restoring a ruined economy and unity on the basis of work, justice, humanism and the friendship of peoples. And so a homeland revived, which apparently should not have existed, but withstood all the sanctions, the fascist invasions, and achieved a breakthrough in space," said its leader, Gennady Zyuganov, on December 8 during a gala-concert in the House of Trade Unions in Moscow.

The USSR brought social progress and gave the world a push in the fight for the rights of minorities and women. For example, two years after the October Revolution, in 1919 the International Labor Organization was created to deal with growing labor discontent.

Kristen R. Ghodsee, who directs Russian and Eastern European Studies at the University of Pennsylvania School of Arts and Sciences, tells Penn Today that “after the launch of Sputnik in 1957, America's leaders panicked. They feared they were losing the space race because of a lack of people trained in science and math, partly as a result of Soviet investment in women's skills. A 1957 report on Womanpower had noted that "there are about 13,000 women graduating as engineers annually in the Soviet Union, compared to the very low 100 in the United States."

Beyond the social and scientific progress, or the successes in the space race during the Cold War, many Russians who miss that time today point to the stability of their lives. “You have to understand that a good part of the population of the USSR lived better than now in relative terms. It is true that now we consume more, we have more opportunities, we travel. But then the needs were less and the relationship between these and the opportunities to satisfy them was favorable at that time”, the sociologist Borís Kagarlitski explained to this newspaper a year ago, on the occasion of the anniversary of the end of the USSR.

After the Second World War, with Stalin the USSR became the second nuclear power after the United States, and when its 50th anniversary was celebrated in 1972, it was already recognized that its military capacity was on par with that of the Americans. At that time, few in the country imagined that a century of existence could not be reached. But it was only 69 years old (74 if we start counting from the revolution).

The last ones were not exactly a bed of roses. The last decade was marked by the failure of the war in Afghanistan, the Chernobyl nuclear disaster of 1986. And, of course, Mikhail Gorbachev's perestroika, freedom for some but betrayal for others.

“For my generation, which was in its twenties, the end of the USSR was the beginning of a new life,” journalist and activist Olga Románova said of the disintegration of the Red Empire.

As Putin himself said a couple of months ago, the legacies left by the USSR are not in good taste either. According to him, the dissolution of the USSR is the cause of the current conflict between Russia and Ukraine, and also between other countries in the former Soviet space.

The Kremlin also tiptoed in 2017 on the centenary of the October Revolution. In 1917, as in 1922, a new era was beginning that marked the entire world in the 20th century, but also brought suffering to millions of people.

The USSR no longer exists, but for now there are very real uchronies. By 2024, China will overtake the Soviet Union as the country where a communist party has ruled the longest. Perhaps this colossus will reach its centenary, in 2049.