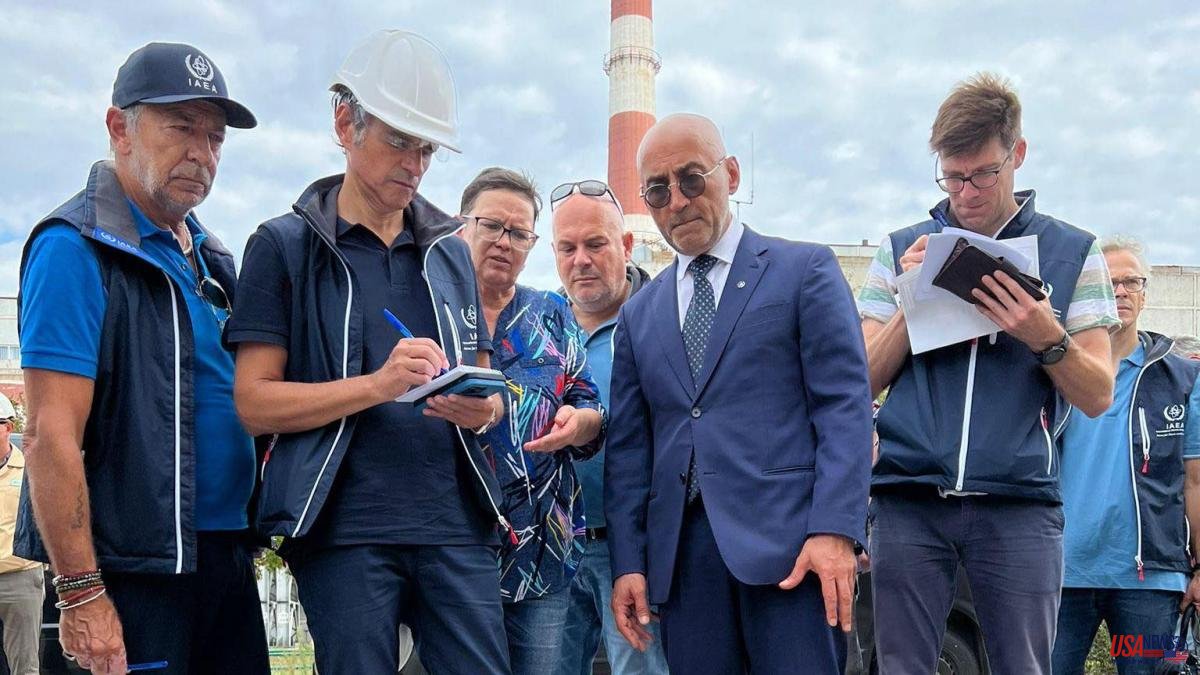 Two inspectors from the International Atomic Energy Agency (IAEA) will remain monitoring Ukraine's Zaporizhia nuclear power plant in the long term. That has been the most important announcement of the director of the atomic agency, the Argentine Rafael Grossi, upon his arrival this Friday in Vienna, headquarters of the IAEA, on a lightning trip from Ukraine. Grossi and his team of thirteen inspectors visited the plant occupied by Russian troops since March on Thursday afternoon. Six of them stayed but four will leave next week and by then Grossi hopes to be able to present a full report. On Tuesday he will report to the UN Security Council. The director of the agency linked to the United Nations could not specify how long his inspectors will remain at the plant, but his wish is that it be "permanent."

Grossi has stated that on Thursday's visit "I saw everything I asked to see, even what I asked on the fly" and that "we get information about the plant all the time". The team had no contact with the Russian military inside the plant, although "we saw military activity around it" as well as "impacts" indicating that "the physical integrity of the plant has been violated not once but many times." Grossi has pointed out that Ukrainian and Russian technicians work at the plant and that there is a "professional relationship between them", although "also tension for obvious reasons of the war".

The most important aspect is the concern for the external electrical supply, because if it were to be lacking, the reactors would not be cooled "and that would lead to a serious accident." In this sense, the experts confirmed that "there have been interruptions" of two or three of the lines, although in those cases the diesel generators worked.

"I don't want to trivialize the facts," Grossi stressed. We believe the situation is extremely complex." “I am very concerned that military activity is increasing a lot in this part of the country.” In that sense, the most worrying thing is the power supply to the plant. And the most important thing "is that we are there, it is no longer a question of 'A says this and B says the opposite because the IAEA is there".

The Ukrainian president, Volodímir Zelenski, has criticized in his daily address to the nation that the IAEA has not demanded the demilitarization of the plant, which "is exactly the goal of Ukrainian and international efforts." According to him, in the conversation he had in Kyiv with Rafael Grossi, before the mission traveled to the plant, "it was clearly stated: demilitarization and total control by Ukrainian nuclear specialists." Zelensky has also complained that other conditions he agreed with Grossi have not been met, such as that the independent press has not been allowed to accompany the IAEA members.

Russians and Ukrainians accused each other of a mortar bombardment that on Thursday, hours before the arrival of IAEA inspectors, forced the disconnection of one of the only two reactors still in operation. This Friday, that reactor, number 5, has been connected to the network again, according to Enerhoatom.

The head of the Ukrainian National Security Council, Oleksyi Danilov, told the Associated Press in an interview that measures are being taken to ensure power supply for next winter in the event that the connection to the Zaporizhia plant is lost. , which supplies about two million homes. Danilov has said that the Ukrainian authorities do not know exactly what the situation is at the plant, despite the visit of the IAEA inspectors. And specifically he has claimed to be unaware if the Russians could have mined it.

Ukraine said on Friday that it had attacked a Russian base in Enerhodar, the city three kilometers from the nuclear power plant. On the other hand, the office of President Volodímir Zelenski has reported Russian bombardments that would have affected homes, gas pipelines and other infrastructure in Níkopol, just in front of Enerhodar and the nuclear power plant on the other bank of the Dnieper River. The Ukrainians have always accused Russian troops of using the plant to bomb Nikopol.