The artist who 14,000 years ago drew his own house

It is almost a selfie, engraved with flint on a slab. 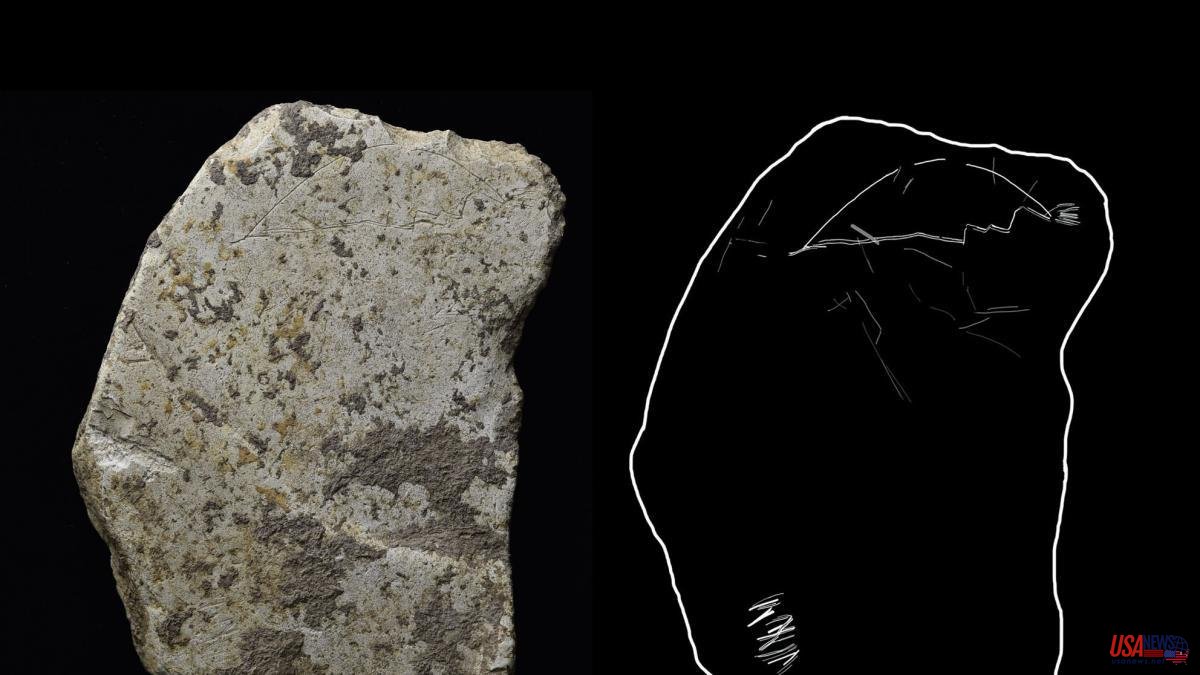 It is almost a selfie, engraved with flint on a slab. And it measures 11 × 8 centimeters, it is almost square, like the current Instagram photos. The drawing of the house is perfectly recognizable, that is, the cave where its author certainly lived: it is the Cova Gran de Santa Linya, in the Lleida municipality of Les Avellanes-Sant Linya. The perspective is very similar -from the top of the mountain in front- to that used in some modern photographs. The image is neither more nor less than 14,000 years old and has appeared on a more or less flat marl-calcareous rock, located in the excavations that have been carried out for years in this exceptional archaeological site.

On the other side, the stone shows a herco, a type of wild goat native to the Pyrenees that became extinct in the year 2000. After a 3D scan and laborious interpretation work, the experts consider that the artist wanted to show a animal in a resting position that suddenly sits up. Is the artist going to hunt him down? In the picture, of course.

Similar artistic representations have been found in other parts of Catalonia, but never before in the pre-Pyrenees.

The rock was discovered in an area of ​​the site where there are traces of fire; These were analyzed with the carbon 14 technique and it was concluded that they have been there for 14,000 years, so that is also the estimated age of this illustrated stone.

The excavations in Santa Linya are in charge of the Center for Archaeological Heritage Studies (CEPArq) of the Autonomous University of Barcelona (UAB) and are directed by Rafael Mora, director of the center and professor of prehistory. Rafael Martínez Vallejo, a specialist in prehistoric art from the Valencian Institute for the Conservation, Restoration and Research of Cultural Assets of the Generalitat Valenciana, has collaborated in the restoration and study of the piece.

The finding -announced this morning at the Museu de Lleida- occurred in the same sector where the incomplete skeleton of a Homo sapiens specimen baptized as Linya appeared in 2021, although the slab is earlier.

“This artistic representation identifies a new unique element that adds to the rich and extensive archaeological record that research in this site has provided in the last 20 years, key in the current development of archeology in Catalonia”, Mora values.

There is no marl-calcareous rock in the area, so it was transported there expressly to use it as a canvas. Was it so important to take that trouble?

The schematism of both faces of the stone surprises the experts, who speak of a "new art", which breaks with the detailed naturalistic figurations, remarkably realistic, made in previous stages, in the art of the caves, authentic cathedrals of the most ancient of mankind.

In this plaque, the representation of the cave is deliberately angled towards one of the margins, intentionally leaving a wide void.

A concave groove closed at the base by parallel zigzag lines seems to represent the landscape of Sant Linya, with the shelter and the Sant Miquel stream flowing ahead. Mora's team defines it almost as a current logo.

On the other side of the slab, the visual trick of the goat standing up surprises the specialists. It is done with great skill. Rarely do drawings like this appear on mobile supports. A small face in profile is the base of an imposing antler, and the outline seems to suggest the lines of the Animal's back and belly, from which the limbs depart. The horns seem to be indeed herco. On this image it has been possible to establish what new lines were treated that create a figure superimposed on the first, in which a stylized Animal stands on its hind limbs. This composition seems to indicate an attempt to capture the same animal standing up.

For archaeologist Jorge Martínez Moreno, a researcher at CEPArq-UAB who participated in the study, "we found elements and visual resources with which to narrate stories or specify spaces that denote that the person or persons who carried them out were intelligent and technically skilled, and that by combining few lines were capable of generating visualizations with a high empathic content that we have been able to decode thousands of years later“.

This type of mobile art is key to analyzing and interpreting the symbolic and cognitive capacities of past humans.

In the Catalan sphere, they began to be discovered at the beginning of the 20th century, starting with the San Gregori plaque.

In more recent times, and especially in the Tarragona area, there have been important discoveries at the Hort de la Boquera, Cova del Fem and Molí de Salt sites, all of which are considered to be from the end of the Paleolithic.