The areas bless Barça in Mallorca

The games that are not pretty are won in the areas. 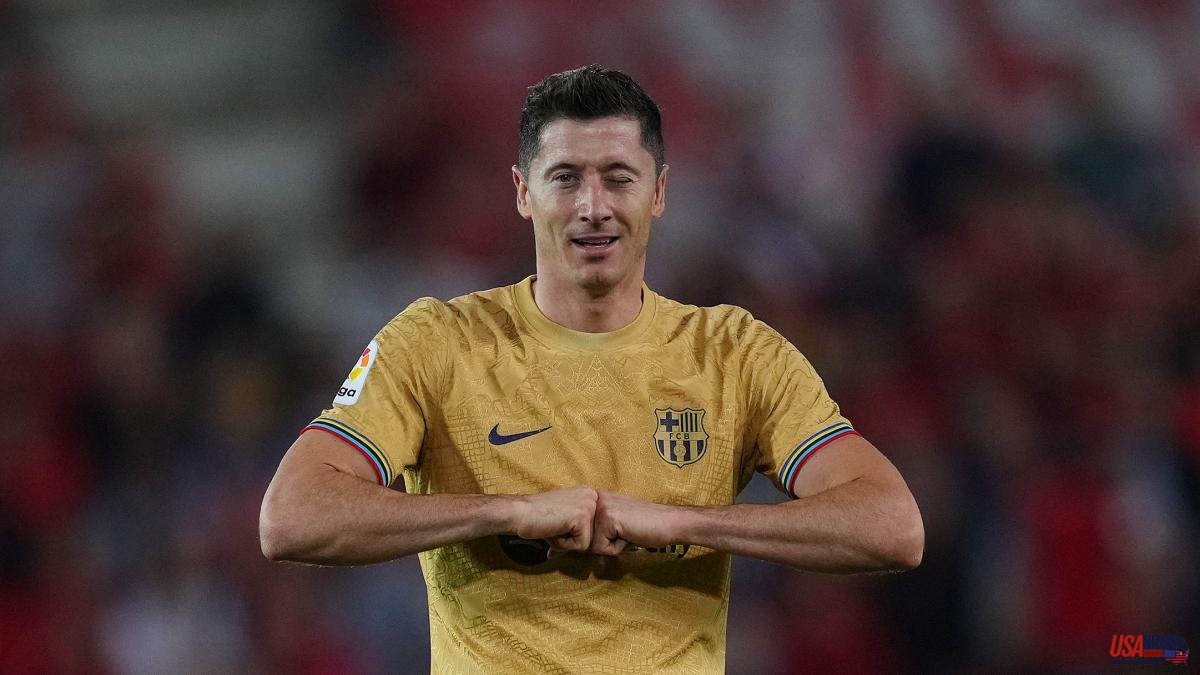 The games that are not pretty are won in the areas. The nights when football is conspicuous by its absence, the matches are decided in the auctions. In the absence of dribbles, pen plays and imagination, you have to be forceful in the decisive rectangles. Hit and stop. One goal and a clean sheet. Barcelona embraced Lewandowski and Ter Stegen to add their sixth consecutive victory in the League and the eighteenth start without losing since Xavi Hernández arrived.

Lewandowski is so sweet that it seems infallible. He has half a chance and scores. He does not stop fattening his records, typical of the great world scorers. 9 goals in the League and 12 in total since he wore a Blaugrana. While Ter Stegen has only fit in Anoeta and has 534 minutes with the bolt on. Without fanfare, it was enough for Barça to win the Mallroca duel.

For the first time in the 22-23 season, three of the four captains coincided in the eleven. Busquets, Piqué and Jordi Alba are, not counting the Polish striker, the three oldest in the squad. Xavi turned to them just after the national team break and before the trip to Milan to visit Inter in the Champions League. Perhaps that is why Pedri and Raphinha also rested from the start, after performing with Spain and Brazil, respectively.

Barcelona knew that it was going to be dominant in long stretches of the match, as it was, but the pace of the game, with Kessié and Gavi as interiors, suffered and it was too slow, with many touches, very thick before the two overcrowded lines that Mallorca planted near his area.

Without spaces, despite the fact that Dembélé and Ansu Fati opened the ends, Lewandowski appeared little, closely watched by the three local central defenders, no matter how hard they tried to filter passes from above and below to connect with him.

Mallorca, crouching, was very clear about where their options would be: in a long ball or in the stopped ball. And he had both at the start. First when Balde, who had a hard time positioning himself as a right back when he is left-handed, made a mistake in a clearance and let Kang-In Lee run. This caused a corner. In the second corner kick, Ruiz de Galarreta took advantage of a block to receive only at the edge of the area and shoot in a move from the board by Javier Aguirre.

There was hardly any news of Rajkovic in the match. But when the Serbian goalkeeper had to intervene he could do nothing but get the ball out of his net. Because Lewandowski invented a goal out of nowhere. The striker took it out of his hat. In two movements he disarmed the entire defense and left the goalkeeper speechless. Uncheck, crop and shoot. In the blink of an eye, he made the play and finished it.

Ansu Fati attracted two markers to the left wing and the Pole launched himself into the space that had originated. He received the ball, entered the area and tricked Valjent by making him pass by with a cut, and at the same time, placing the ball already in his right boot, with which he unleashed a dry and unappealable whiplash at the base of the long post. Rajkovic flew with a totally useless lunge.

The blow was like a straight to the jaw, like a lumberjack's ax blow, like a scalpel, like laying cards on the table in a winning hand. The ball entered as if it were remote controlled. It is Lewandowski's ninth goal in seven days, the twelfth in his account. He did not score in the double commitment with Poland and Barcelona's 9 had arrived hungry in Mallorca, where last season it was Luuk de Jong who broke down the resistance to give the three points. Any resemblance to today is purely coincidental.

Or not. Because Ter Stegen, as happened in January, had a saving performance. Not in the last minute of the game, like then, but he did prevent the tie before the break. And he did it by frustrating the same footballer, Jaume Costa, he again had a point-blank shot that the German was able to catch with very good reflexes.

The Blaugrana had achieved the most difficult part and perhaps they trusted because they saw it as easy when Busquets left Lewandowski alone again and he tried to show off with Vaseline. Rajkovic was attentive and caught.

However, in a jiffy the two central defenders of Barcelona were charged with yellow cards. Christensen saw it for a foul on Muriqi and Pique for going to the ground and dragging Kang-In Lee, but Kessié was also booked the next play for cutting off a Maffeo advance, which he grabbed. In the middle of that festival of cards, Òscar Hernández, Xavi's assistant, was expelled. There Barça understood that the second half was going to be long.

After the break, the Blaugrana, in an official and gray plan, continued to play slowly, passing the ball to their feet and not wanting to risk it, so as not to concede losses. Not even with the entrance of Pedri or Raphinha did they get excited. That has the danger that Mallorca arrived alive and eager at the end of the match. The locals went on the attack when they had nothing to lose and Kang-In Lee almost found the goal in a center-shot that was narrowly missed and that Muriqi did not reach either. The areas bless this Barça of Lewandowski and Ter Stegen.

Incidents: Match corresponding to the seventh day of LaLiga played at the Son Moix stadium before 18,103 spectators, the full capacity of the field that is under construction. The match was attended by Lionel Scaloni, Argentina national team.