Juanma Moreno's PP would win the next elections with the support of 39. 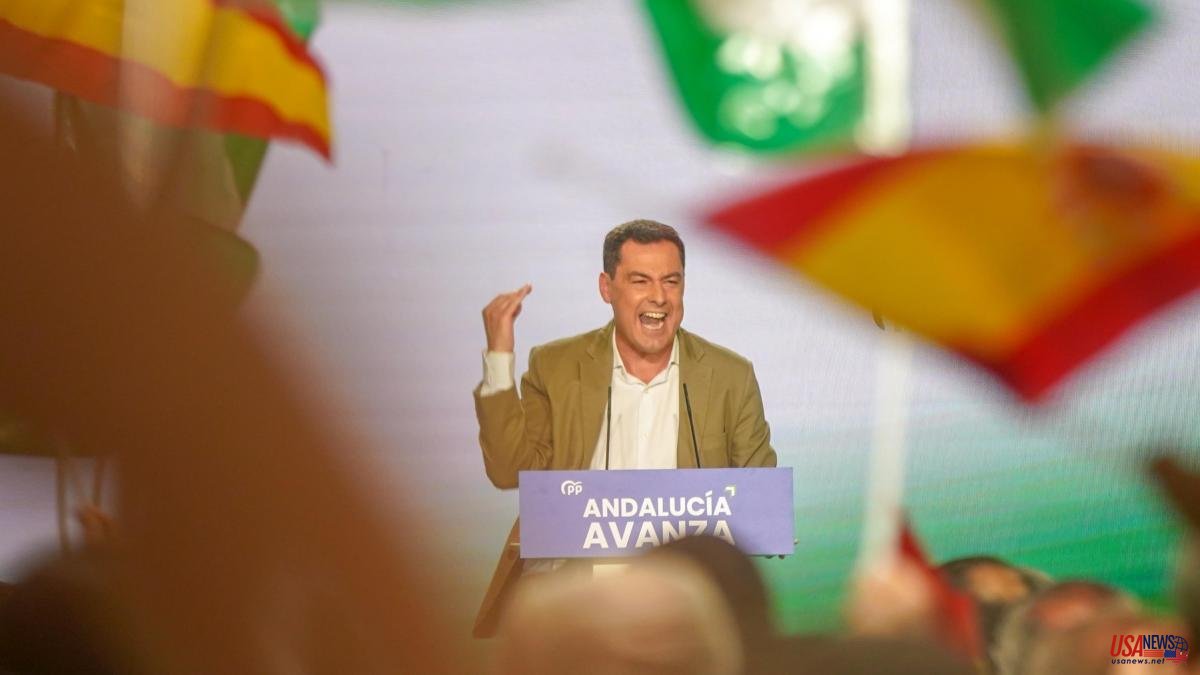 Juanma Moreno's PP would win the next elections with the support of 39.2% of voters, obtaining between 47 and 49 seats, and staying six away from obtaining an absolute majority, a cut that in the Andalusian Parliament stands at 55. For its part, the PSOE-A could hardly keep the same representation that it obtained in the 2018 elections, obtaining between 31 and 32 seats (it now has 33) and achieving 24.2% of the votes, while Vox would make a great leap quantitatively, doubling the number of representatives in the Chamber and reaching between 21 and 23 deputies.

These are the data from the latest survey carried out by the Andalusian Studies Center Foundation (Centra) between May 3 and 13, from which it is established that the popular ones would add more support than all the leftists together, remaining in the hands of the of Vox to form a government. Those of Abascal, who could opt for abstention in the act of investiture, have already discarded that idea, and insist on being part of the group of leaders with decision-making responsibility in the future of the Andalusians. The vice presidency for Macarena Olona is a goal to be achieved, but they also aspire to lead a council.

Juanma Moreno would stay at the gates of that majority enough to lead the community alone. Although the Andalusian barometer predicts a clear increase in votes for her, surpassing Juan Espadas' socialism by up to 15 points, her accounts would still not add up and she would be forced to come to an understanding with those of Vox.

The ultranationalists would become, as the Andalusian CIS has announced during the latest polls, in the third political force, going from the current 11 parliamentarians to 21-23 seats. Those of Vox, led by the controversial Olona, ​​are getting the rural vote (traditionally socialist) and the disenchanted PP to change the ballot for that of their formation, a transfer of support with which they know they are fundamental for the management of the next legislature. "If the PP has more seats than the left and needs Vox's seats, don't think that you are going to get them for free or that you are going to get an abstention," said Santiago Abascal, leader of the extreme right, who warned Moreno of that he “forget” to govern “quietly alone”.

For its part, Ciudadanos, led by Vice President Juan Marín, would be on the verge of extinction by only achieving between 1 and 2 seats, making it impossible to reissue the 2018 coalition. The orange formation would be 'swallowed' by the popular, and would fall to the fifth place of the most voted forces, behind Por Andalucía.

The left-wing confluence PorA, led by Inmaculada Nieto, made up of IU, Podemos, Equo, Más País Andalucía, the Andalusian People's Initiative and the Green Alliance, would get 6.6% of the vote, which, translated into seats, would represent 5 seats, while Teresa Rodríguez's formation, Adelante Podemos, would obtain 3.6% of the electoral vote and one seat.

The majority support for Moreno Bonilla is also reflected in the polls published this weekend by 40db for El País and Sigma Dos for El Mundo. Both polls predict a significant thickening of votes in the popular ranks, which would almost double their seats and, on the other hand, would confirm the socialist bump, which would not be able to 'come back' with Swords in front. The 'regeneration' of the PSOE-A does not catch on among citizens, which, as a national reading, deals a major blow to the policies of Pedro Sánchez, leader of Ferraz.

According to data published by 40dB for El País, the PP-A would win 48 seats (it now has 26), while the PSOE-A would maintain the current 33. In third place is Vox, although with lower results compared to those offered by Centra. In this case, Macarena Olona would get 18 (7 more than the representation she has had during this legislature in Parliament), while giving the left several more points of support. Specifically, Por Andalucía would be made with between 7 and 8 seats and for Adelante Podemos, between 3 and 4 are predicted. Ciudadanos would be left without any representation in the Andalusian Chamber.

Sigma Dos for El Mundo gathers more support for Moreno Bonilla, who would get between 46 and 50 seats, and lowers expectations for Espadas, who would drop to 30-32 seats. Vox, likewise, would be the third party with the most social support, obtaining between 16 and 17 representatives. In terms of support for the left, according to this survey, Por Andalucía would achieve this first time by running for elections as a coalition of 6 parties, a total of between 8 and 10 seats, while Adelante Andalucía would achieve 2. Ciudadanos, on the other hand, it would be done with between 2-3 parliamentarians.