The abortion taboo in Malta

Maria was 25 years old when, in September of last year, she began to feel strange. 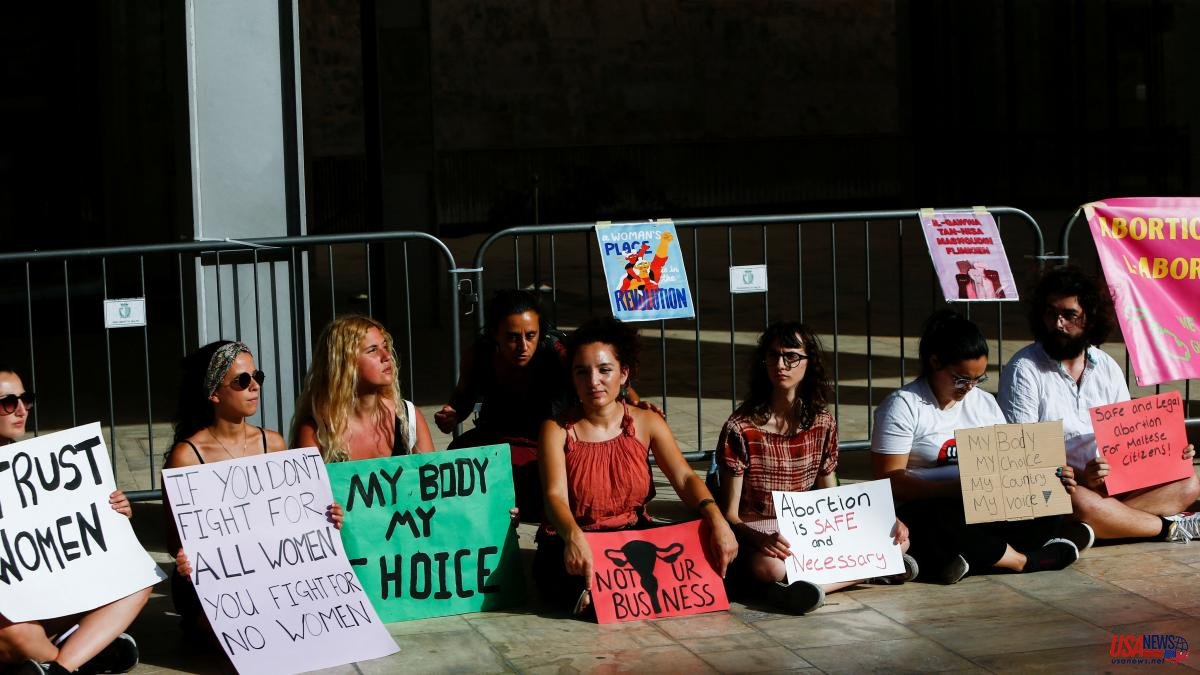 Maria was 25 years old when, in September of last year, she began to feel strange. After a few days, she didn't get her period. Her pregnancy test came back positive. She was not mentally at an ideal time in her life to have a child. She had it clear from the beginning: she was going to have an abortion.

If she had been born in Spain, the United Kingdom or France, Maria – a fictitious name because she does not want to reveal her identity – would have had a much easier time. But she was born in Malta, the only EU country that bans abortion under any circumstances.

Aborting on this Mediterranean island is punishable by up to three years in prison. Helping to abort gives doctors a sentence of up to four years and the loss of their license. If the fetus is going to die within a few days of birth, the pregnancy must continue. The same if it is the result of a violation. Even in Poland, which tightened its laws in 2021, rape victims can theoretically terminate pregnancies.

This could change soon. For the first time, the Maltese Minister of Health, Chris Fearne, has opened up to reviewing the application of the law after the mediatic case of Andrea Prudente, an American tourist who was traveling in Malta when she suffered a placental abruption and had to be evacuated to Palma de Mallorca because the Maltese doctors refused to remove the fetus from her womb, despite the fact that it was impossible for it to survive. "There should be no part of Maltese law that prevents paramedics from saving lives," Fearne said.

Prudente, a 38-year-old woman who lives near Seattle, was vacationing on the island when she started bleeding at 16 weeks' gestation. A few days later, her water broke and her placenta began to dislodge. According to her lawyer, Lara Dimitrijevic, there were serious risks to her health. She could suffer from a dangerous infection. The only way to avoid it was to terminate the pregnancy, but although she was hospitalized, the doctors could not do so due to a heartbeat in the fetus. Until she stopped beating, it was illegal. Had she not been transferred, they would have had to wait, even for weeks, until the embryo died or she Prudente had a life-threatening infection before intervening.

“In this case there has been a lot of international pressure, but it is not the only one. There are three or four similar cases a year," says Dimitrijevic, founder of the Women's Rights Foundation association.

There is a loophole in the strict Maltese abortion law. It is called the “double effect” principle, whereby it is sometimes acceptable to end the life of the embryo if it is to save the life of the mother. The intention is to prevent cases like that of the Irish Savita Halappanavar, who died of sepsis after refusing to perform an abortion, from happening. This is what defends the anti-abortion doctor Miriam Sciberras, president of the Life Network Foundation, who maintains that abortion is not necessary in Malta to protect pregnant women. "If the woman's life is at risk, doctors have a legal and ethical obligation to do everything in their power to save the mother's life, whatever the consequences for the unborn baby." “Our laws are enough”, she insists, pointing out the statistics of zero maternal mortality in the last 12 years.

Isabel Stabile, from the activist group Doctors for Choice and the only openly pro-abortion gynecologist in Malta, questions this reading. She considers that it is due to the low probability –Malta has 525,000 inhabitants– and she believes that in the 21st century mortality should not be the only health scale. "We should measure the result in physical and mental effects for women," he reasons. Imagine what it means for a woman to be pregnant without wanting it, and wait two weeks for the pills to arrive. They are desperate, in case they arrive, in case they are confiscated, in case someone discovers them.”

That it is not allowed does not mean that Maltese women do not have abortions. They do it, risking being denounced, in silence. Maria, when she saw the positive test, went "in a panic", but she couldn't tell anyone. She at first thought that she would have no choice but to go abroad, but she could not absent herself from her work without revealing the purpose of her trip. She discovered that she could buy abortion pills on the internet. She paid about 100 euros and waited ten long days until her package arrived.

“Waiting was the worst part, and the one that had the most psychological impact. In the end, I couldn't help but tell a friend and my mother, because it made me very anxious." She took the first pill in the car, after consulting with his gynecologist, Dr. Stabile. She cannot legally sell these pills, but she does provide information on how to do so safely. She has no choice but to advise her patients that if they have any complications during the process, lie when they go to the emergency room and say that it is a miscarriage. "Luckily I had a typical abortion, but I know of a girl who bled a lot and it was terrible," recalls Maria.

In Malta there are between 350 and 400 women who buy abortion pills every year. More than half are mothers and the average age is 28 years. "They are not young people who sleep around, they are adults with children," Stabile emphasizes. That is not counting those who choose to travel to the United Kingdom, Spain or Italy.

The reasons for this closure to abortion in Malta are many. The main one, according to all the people consulted, is the strong roots of the Catholic Church in a very small society in which everyone knows each other. The cult of the Virgin Mary is very important in Maltese culture, so is the worship of the purity of women. “In some rural places there is a tendency to stigmatize women's issues. If you talk about clitorises or orgasms, they look at you as if you were from another universe,” explains Marlene Farruggia, a former deputy who last year surprised by presenting a law in Parliament to decriminalize abortion, which was unsuccessful. "Sex education is very poor," Maria agrees. They told us that the only guarantee against pregnancy was abstinence.” Even today in many of the schools they show a graphic documentary against abortion, called The Silent Scream, to show a ruthless process.

It looks like things are starting to move. "It's still a taboo but people are starting to find out about reproductive rights," says Farruggia. In June, 188 women of reproductive age signed a court petition because they believed their rights were being discriminated against by the outright ban on abortion.

Former Prime Minister Alfred Sant, now an MEP, believes that although the majority of Maltese are still against the termination of pregnancy, there are those who are beginning to question it, as happened with divorce. It was not approved until 2011, but same-sex marriage has been legal since 2017. “We can be on the same path – Sant bets -. The debate is moving forward and at some point there will be some kind of referendum or government measure, but it will be the Maltese who decide, without outside pressure.” This week the European Parliament has requested that abortion be included in the EU bill of rights, with the paradox that its president, Roberta Metsola, who is Maltese, must defend it. She has not commented on the issue and says that she will defend the position of the European Parliament.