The 800 is still Kenyan: Korir adds world gold to his Olympic gold

As they have three representatives in the final of the 800, a range of Kenyan talents from the discipline celebrate a kind of coven at a Starbucks in Eugene, at the gates of Hayward Field. 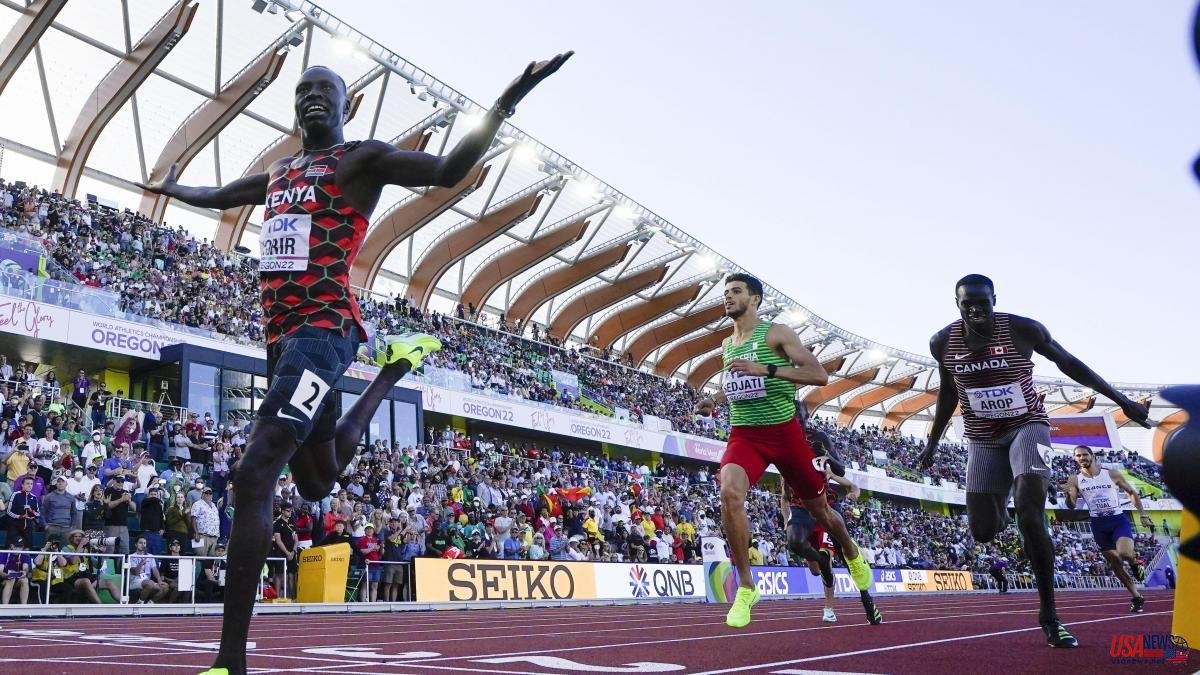 As they have three representatives in the final of the 800, a range of Kenyan talents from the discipline celebrate a kind of coven at a Starbucks in Eugene, at the gates of Hayward Field.

There is Wilson Kipketer (49), who was Kenyan before taking Danish nationality and had held the universal record for the discipline (1m41s11) and had chained three world titles in the nineties (95, 97 and 99).

And there is Paul Ereng (55), Olympic gold medalist in Seoul '88, who had graduated in Sociology at the University of Virginia and now trains young talents in El Paso (Texas) and is very, very tall.

The temptation overcomes me, so I approach Ereng and say:

-I still remember your victory in Seoul: you knocked down Cruz and Auita.

(a lot of time has passed)

"Yeah, but that's not forgotten," I insist.

Paul Ereng smiles, not much either.

I notice him tense, perhaps worried.

Three Kenyans dispute the final of the 800.

There is Emmanuel Korir, the Olympic champion in Tokyo 2020.

And Wyclief Kinyamal, who had been a high jumper as a child (he rose to 2.10m) and is a training partner of Eliud Kipchoge in Kaptagat, one of the NN Running Team headquarters.

And Emmanuel Wanyoyi, the 17-year-old boy who has been astonishing experts for months.

They are three Kenyans among eight eighteenth-century.

And yet things are not clear. Well, the two Algerians, Djamel Sedjati and Slimane Moula, are two bullets with six gears and, a couple of days ago, the Spaniards Adrián Ben and Álvaro de Arriba placed them as favorites.

And he doesn't say any more, he doesn't want to risk it with the journalist, so I sit down to wait for the final, which takes place five hours later.

Now it's the race and Moula, the Algerian who has dyed his hair blonde and runs with his arms wide open, does what he has to do: he takes his lead and holds the rhythm. If the test slows down, his options multiply.

And the rest he lets him do, because Ereng, Kipketer, and Rudisha do not run in the synthetic, Kenyans who in their time assumed command of the discipline and determined the future, and Korir, who does run, is rather shy and hides.

They pass the 200 in 24s95 and Marco Arop, a Canadian giant who looks like a javelin thrower, gets nervous. He speeds up and takes over and Moula lets him do it and the Kenyans do too.

(the chronicler imagines Ereng in the box, consumed with nerves)

The entry into the straight is a show.

Korir, as much of an 80-year-old as he is of a 18-year-old (he credits 44.21 on the lap), compulsively nodding and waving while the others go into slow motion. Korir comes and Djamel Sedjati comes, the other Algerian, who takes gold (1n43s71) and silver (1n44s14) and leaves Arop with bronze (1m44s54), and the boy Wanyoyi comes fourth and celebrates it as if the title was his.

And now, Kenya retains the scepter and Korir can now go and sit next to Kipketer and Ereng at the University of Oregon Starbucks.