The 40th Book Week in Catalan starts with the goal of 50,000 visitors 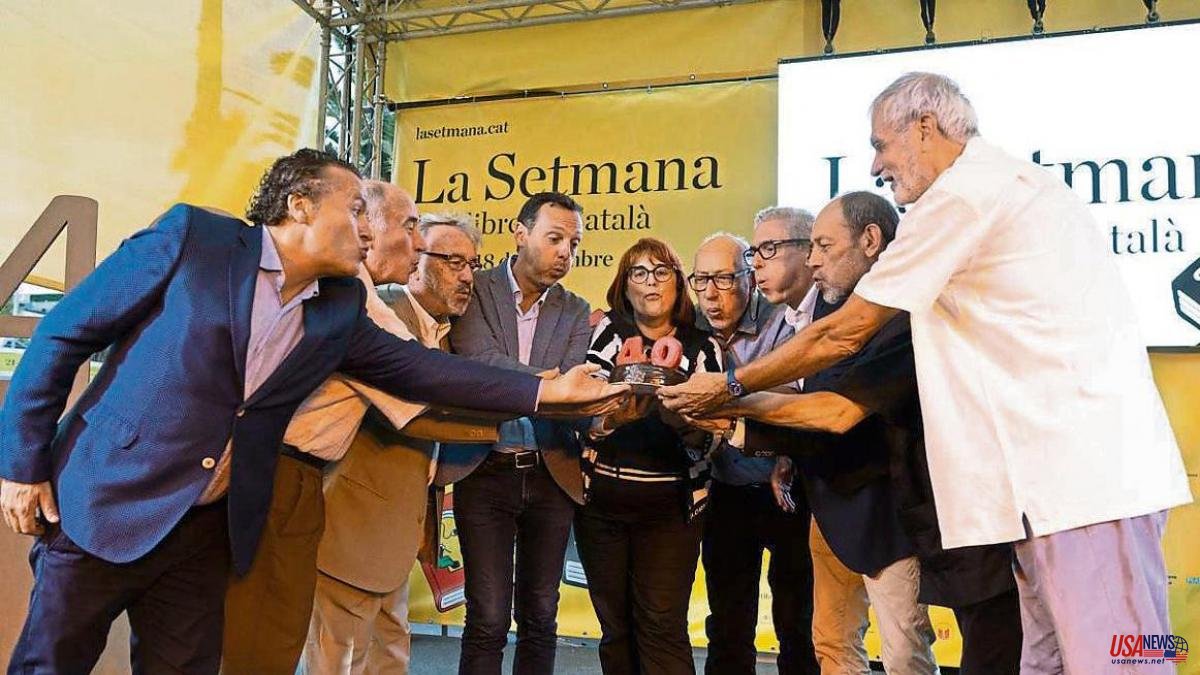 "The party begins". So clearly was the president of the Setmana del Llibre in Català, Joan Carles Girbés, who yesterday gave the starting touch to the 40th edition. Girbés thus expressed the change that has taken place in these four decades, when they began trying to be at first like a large bookstore in Sants station focused on background books until they became a full festival with 8,000 square meters, more than 300 activities, the presentation of 150 novelties and the exhibition of 200,000 copies between books and magazines.

To define the objectives, in the morning, at a press conference, Girbés offered another figure: “We want to exceed 50,000 visitors. If Coldplay has achieved it in one day, we can offer in ten days what the discovery of the vitality of the book in Catalan entails, so it is worth it for people to come and spend the day at Moll de la Fusta”. Precisely the location is also key to growth, and that is why it remained in the Moll de la Fusta, the first time that it has been held there voluntarily and not forced by the pandemic.

At the inauguration, in addition to Girbés, the president of Editors took the floor. cat, Joan Abellà; the deputy mayor of Culture of Barcelona, ​​Jordi Martí, and the Minister of Culture, Natàlia Garriga, with the presence also of the general director of Libro de España, María José Gálvez. Abellà's demand speeches (2% of the Generalitat's budget for culture, to have a voice and vote in the project of the new state library in Barcelona and to be able to access the Next Generation European funds) and hand out.

But the applause and the shouts of enthusiasm really went to the herald, even before speaking, the Mallorcan writer Antònia Vicens, this year's Premi d'Honor de les Lletres Catalanes. Vicens recalled a harsh childhood in the midst of a dictatorship and without books, in which "the paths to creativity and creative madness were closed", but the "silenced words belonged to me and were my roots and were freedom". She learned to read and "the books entered and settled", and "the characters mixed with the people on my street", "visions, common experiences close to life and death". Thanks to her books, she "would never be innocent again", because literature is "the touch of our history", and also "that enchanted wand, a space of freedom and fraternity".

Afterwards, some of the presidents of the Week and of the Association of Editors in Catalan (Editors. cat), such as Carles-Jordi Guardiola, Montse Ayats or Joan Sala went on stage to blow out the pastel candles.

In the afternoon the first activities had already begun, such as the live podcast of the Punkis Decimonòniques, the publisher Blanca Pujals and the bookstore Carlota Freixenet, who spoke about English literature, especially Victorian literature and, yesterday, the Donetes (and their followed by Those Donets, just published) by Louisa May Alcott. Among others, there was also talk of literature and violence, as a result of books by Marta Carnicero, Hannah Arendt or Don Mee Choi, or of the Antilles with regard to books by Jamaica Kincaid, Maryse Condé or Évelyne Trouillot, as well as storytellers , a family workshop and show.