The enthusiasm and historical sense of the messages and tweets launched last night by European leaders compensate for the coldness of the bureaucratic official language with which the European Union took note of one of the most transcendental decisions in geopolitical terms in its recent history, the recognition of Ukraine. 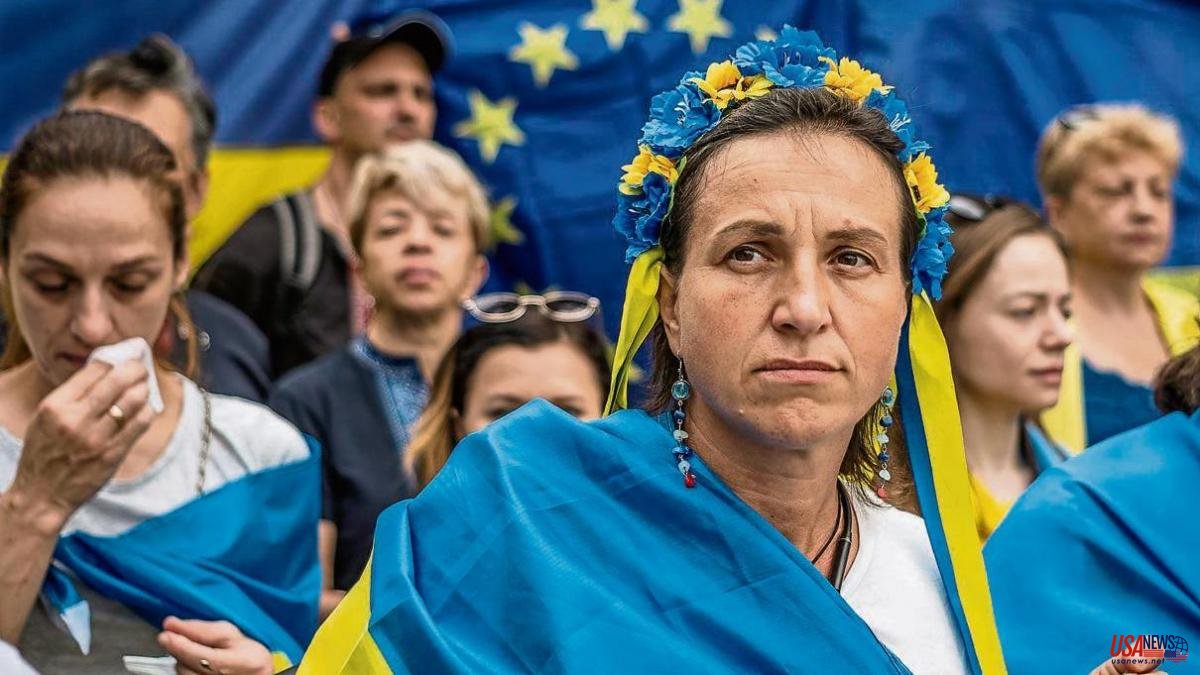 The enthusiasm and historical sense of the messages and tweets launched last night by European leaders compensate for the coldness of the bureaucratic official language with which the European Union took note of one of the most transcendental decisions in geopolitical terms in its recent history, the recognition of Ukraine. and Moldova as candidate countries for the club.

“The European Council has decided to grant Ukraine and the Republic of Moldova the status of a candidate country” and “invites the European Commission to inform the Council of the fulfillment of the conditions specified in the evaluation of their applications”, read the conclusions of the historic summit held yesterday in Brussels, almost four months after the beginning of the Russian aggression against Ukraine.

“It is a historic moment”, “our future is united”, tweeted the president of the European Council, Charles Michel, shortly before connecting by videoconference with President Volodímir Zelenski to transmit the decision to him live. A photo of Deputy Prime Minister Olga Stefanishina hearing the news shows her soaking her tears of emotion into her handkerchief.

"A good day for Europe", celebrated the president of the European Commission, Ursula von der Leyen, promoter of the opinion that paved the way for the light to see from the EU to Kyiv. "The process that is beginning will be demanding, we have always been honest" but France "will help move the process forward," assured President Emmanuel Macron, who expressed hope that Georgia, another country that requested EU membership in the early days of the war, may soon be recognized as a candidate country. The granting of this status to Ukraine and Moldova “places us in the right place in history”, assured the president of the European Parliament, Roberta Metsola.

The prayers of Zelensky, who petitioned for EU membership as Russian bombs fell on Kyiv and other Ukrainian citizens, have been answered. "I sincerely thank the EU leaders for the decision, it is a unique and historic moment in our relations," he tweeted. "We have been waiting for this moment for 120 days and 30 years," he wrote on Instagram. The recognition of the candidate status does not have immediate consequences for the country but it is the previous and necessary step to a hypothetical opening of accession negotiations. Although today those talks seem distant, the symbolism of the EU decision transcends its practical implications.

Opening the doors of the EU to Ukraine is both a show of solidarity towards Ukraine and a clear message to Russia in favor of defending Kyiv's right to national sovereignty and against its theories on spheres of influence. In the continent. “It is a message of unity and determination in the geopolitical field,” Michel declared.

Until February 24, the hypothetical candidacy for Ukraine's accession to the EU barely enjoyed support within the community club, which already had difficulties in 2016 to ratify the Association Agreement with the country, the pact that two years ago instigated the Maidan pro-European movement.

The war changed everything. And last week the Italian Prime Minister, Mario Draghi, took the initiative and transformed the ambiguity of Germany and France towards the idea into a resounding support with which the EU would express its solidarity with Ukraine despite the fact that the process that is now beginning has an uncertain ending.

Other countries that were suspicious of the idea, such as Denmark, Austria or the Netherlands, changed their minds as a result of the support of the founding countries and the opinion of the European Commission. The report approved by the community executive calls for Kyiv to apply some of the recently adopted legislative reforms in favor of judicial independence and against corruption before opening accession talks.

After NATO, for the right reasons, said no to Ukraine, we would have made a big political mistake and left a big void if we didn't give it the candidacy," Macron admitted. The French leader did not hide that the path that is now beginning will be a long one and that the EU has a certain "fatigue" after the latest enlargements. That is why he proposes, in the meantime, to advance his plan for a European political community that allows aligning positions on key issues, an idea that provokes ambivalent reactions. "Let's be honest, we may not live in the same house but we will live on the same street," he said.

Moscow has not yet reacted to the European Union's decision to open its doors to these countries, although in recent days President Vladimir Putin dismissed Ukraine's interest in getting closer to the EU, even admitting that the club has more and more military ambitions, and reiterated his opposition to its joining NATO.

Although by betting on enlargement in such dramatic circumstances, the EU wants to show confidence in the future of the club, hours before the leaders of the Twenty-seven had met with their counterparts from the Western Balkans to evaluate the accession process with an unquestionably unsatisfactory balance for all . Despite all efforts in recent days, Bulgaria maintained its two-year veto on opening accession negotiations with Albania and Macedonia for internal political reasons. There was also no agreement to recognize Bosnia-Herzegovina as a candidate, a process that Ukraine has completed in record time.

Its leaders used irony, sarcasm and good humor to express their frustration with the situation facing their EU accession process, which they compared to "waiting for Godot". The blockade “is a serious blow to the credibility of the EU”, declared his Macedonian colleague, Dimitar Kovacevski. “We are used to this farce but more committed than ever,” Albanian Prime Minister Edi Rama said. “Macedonia has been a candidate for 17 years and Albania for eight”, Rama recalled before giving advice to the Ukrainians: “It is better not to get your hopes up”.

Uncomfortable with the poor outcome of the summit with the Balkans, European leaders commissioned a new report on Bosnia with a view to reviewing the situation at the end of the year. And Macron, who has negotiated with Sofia on behalf of the EU, assured that the Bulgarian Parliament could authorize the opening of negotiations with North Macedonia and Albania on Monday.