There were six kilometers to go on the Tour and the bell announcing the last lap of the Champs-Elysées had already rung when Tadej Pogacar started. 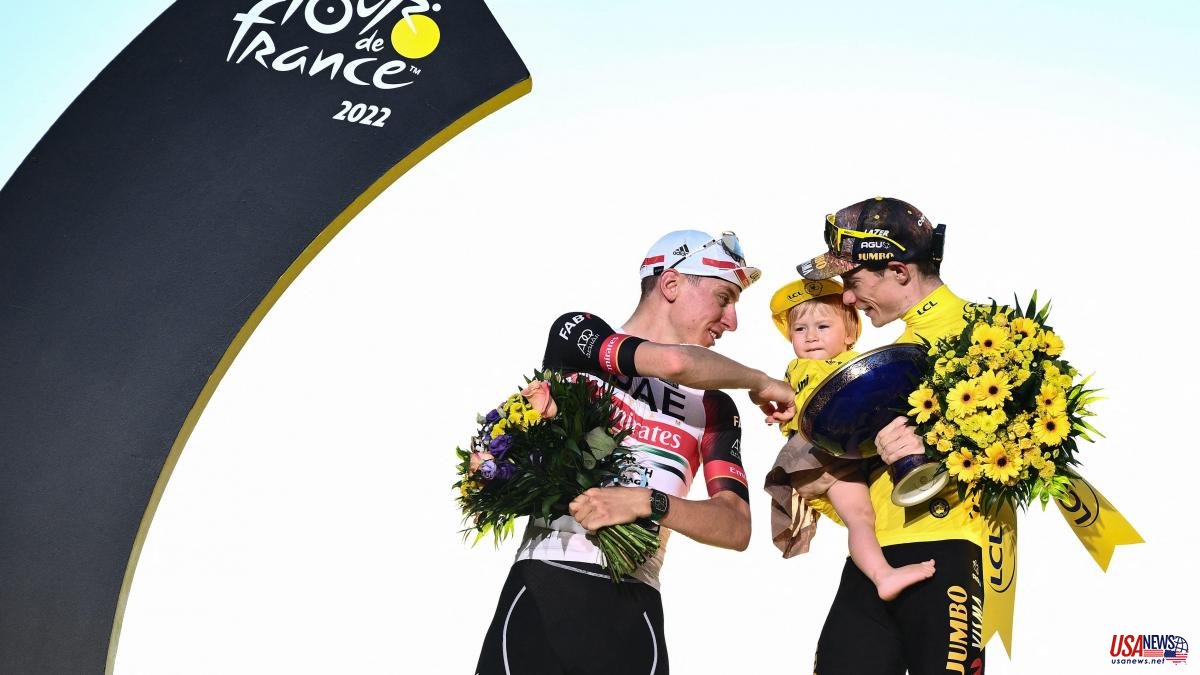 There were six kilometers to go on the Tour and the bell announcing the last lap of the Champs-Elysées had already rung when Tadej Pogacar started. Until the last day the Slovenian, outgoing and fallen champion, gave war and has turned 2022 into one of the most spectacular Tours.

In his speech on the podium, in the Parisian sunset, Jonas Vingegaard dedicated a few words to the second classified and great rival. “Thanks for the fight”, he told the Slovenian. It is not for less. Since he lost the yellow jersey at the Granon, Pogacar played to win the Tour. Despite the superiority of the Jumbo and the fact that he did not have the legs of other years, the UAE cyclist launched three attacks in Alpe d'Huez, three more in Mende, he tried going up and down the port of Lers, isolated the leader in Peyragudes and He demarched five times at Spandelles until he crashed on the descent for risking the limit.

There hadn't been a funnier French round in decades. For emotion, for tactics, for showiness, for fainting, for the work and grace of Van Aert, for toughness and for speed.

Of course, the great surprise of Pogacar overturning Roglic in the Planche time trial in 2020, the Contador-Andy Schleck duel in 2011, Pantani's great attack on Ullrich in the Galibier in 1998 or the record of five in a row from Indurain, but perhaps you have to look back 33 years, until 1989, to find a comparison.

Yes, to the Tour that was decided on the last day and only by 8 seconds in favor of Lemond and to the detriment of Fignon. Third was Delgado at 3m34s, of which he left 2m54s in the Luxembourg prologue when he got lost at the start. The Frenchman snatched the yellow from the American twice and Lemond recovered it another two, the last time in Paris.

“I have only ridden one but it has been a magnificent Tour. Of those I remember, the best”, confesses Quinn Simmons at Charles de Gaulle airport. The 21-year-old Trek American is wearing Birkenstock sandals with socks after making five breakaways and coming within three and a half hours of the winner. “They were going very fast. It is impressive how they have run”.

Simmons thinks there is rivalry for years. "Both have qualities to win several times more." The clash will not only be sporting, but cultural and narrative. Vingegaard (25) couldn't be more different than Pogacar (23).

"The triumph of a discreet", L'Équipe defined the Dane, methodical, obedient, reserved and little given to expressiveness. Neither of the two times he won, neither in the Granon nor in the Hautacam, did he raise both arms. Nothing effusive. His ritual was to get on the phone right away with his partner, Trine. “We have followed the plan”, he said to arrive in yellow to Paris and bring glory to Denmark.

Instead, the Slovenian is a walking smile. Pogacar is spontaneous, impulsive, daring and he sets himself the challenge of winning all the monuments. This year he has been seventh in Sanremo and fourth in Flanders, and he already has Liege and Lombardy. For his part, Vingegaard lives by and for the Tour. So different and condemned to face each other. “We get along well. We don't hang out after the races but we respect each other”, explains Jonas. Right now the peloton can only think that in 2023 the second of Jonas or the third of Tadej will arrive. “You are murderers”, shouted Lapize after first crowning the Tourmalet in 1910. Nobody is up to the first and second. This has been a wild Tour.