Teresa Lanceta, the nomads and the expanded rhombus

The square fixes, the rhombus expands, they are two geometric figures but they say a lot when they are used as an artistic expression, for example, in fabrics; they are two figures that are speaking of a way of understanding space, of moving in it and inhabiting it, the rhombus extends and that is why settled populations do not usually use it, they prefer the grid. 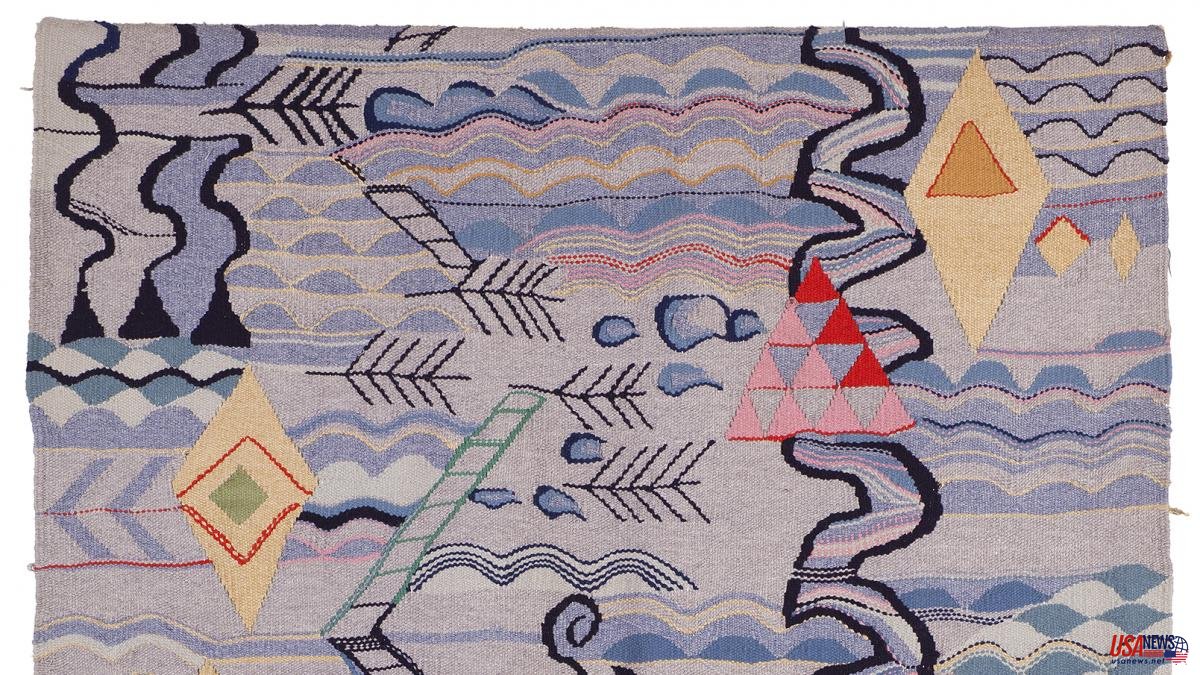 The square fixes, the rhombus expands, they are two geometric figures but they say a lot when they are used as an artistic expression, for example, in fabrics; they are two figures that are speaking of a way of understanding space, of moving in it and inhabiting it, the rhombus extends and that is why settled populations do not usually use it, they prefer the grid. The rhombuses are from Morocco and have a prominent role in the work of Teresa Lanceta, for this reason, because they are nomads and because they come out in a “very natural way, you don't have to be thinking about how you pick up one thread or another”. There is much more to a tapestry than we think we see, and Lanceta explains it in one of the Macba rooms that are hosting his exhibition Weaving as Open Source , an exhibition through which a young and fresh audience circulates tirelessly, spurred on by a vitalist production that has overcome the debate between art and craft.

Teresa Lanceta talks about meshes and motifs in a room that is a tribute to the weavers of the Middle Atlas, and in which her fabrics and others of those anonymous women, always present, hang, something important for a creator who works on co-authored projects. The Barcelona artist has visited the Middle Atlas for three decades, interested in traditional processes since she chose weaving as a means of expression; It was the 1970s and Lanceta became a creative countercurrent from the university, textile art was not considered as such, and even less the one practiced by Lanceta, if at least it had been about installations or performances, but her thing was to weave without other considerations, and so she continued weaving, her works were liked, they were sold, although later the galleries did not dare to exhibit them.

Then yes, the samples arrived, at the Tèxtil museum on Montcada street in Barcelona, ​​the first, then there have been more at the institution, one every ten years, also at the Reina Sofía, now this anthology at the Macba that brings together fifty years of work in the best possible place, in the neighborhood where he lived for so many years and where he continues to work on projects such as the one he has carried out with Nicolás Malevé, the museum itself and with the students and teachers of the IES Miquel Tarradell on Los trades of the Raval.

El Raval, with its labyrinthine streets full of life through which it would seem that we are walking in another of the exhibition rooms, the one that houses a series of fabrics that hang as if they were streets made expressly for the exhibition between 2019 and 2020 in Alicante, where Lanceta has his workshop. Triangles sewn in the manner of the patches with which fabrics were used before everything was left over, worked on the front and back, because as the creator explains, there are things that are hidden from view that are important, a lot of red, the of the vitality of a neighborhood where successive waves of immigrants follow one another, young and full of life, also black, the color of wisdom, that shade we look for when we want to see something without being dazzled by the sun, pieces that bear names such as Jerusalem, 8, or Plaça Reial, 13, where their different addresses were located.

A universal act, that of weaving, present in all cultures, practiced by women, forged in domesticity. Perhaps that is why it has taken so long to be recognized. Middle Atlas weavers collect the knowledge of other generations and pass it on to the next, and there, in the 1980s, Teresa Lanceta discovered the act of weaving as a binary and open code at the same time. Like the rhombuses and their unlimited expansion.

Curators: Nuria Enguita and Laura Vallés Vílchez. Macba. Barcelona. www.macba.cat. until September 11. In autumn it can be seen at the IVAM in Valencia