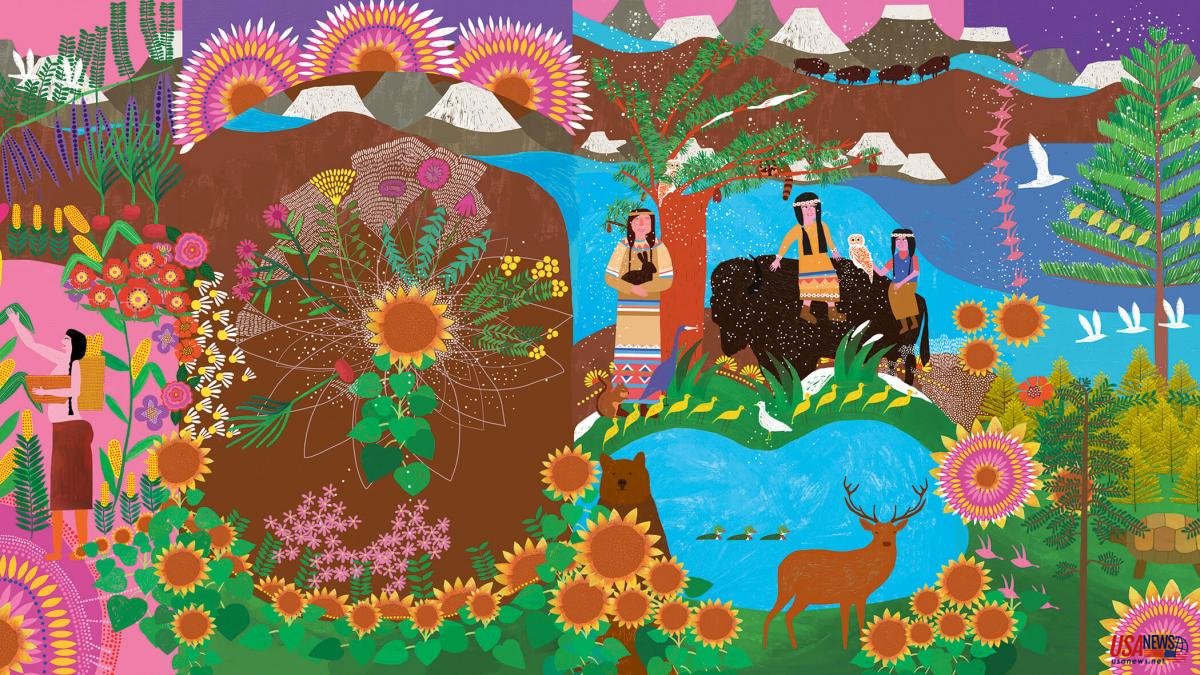 For those who are always late and for those who wait for inspiration at the last moment. For them and they are these Tales that tell in which we collect ten books to remain as true Kings in this final stretch of the holidays. Inspiring books, with a sense of humor and, above all, with illustrations at the forefront of the great works found in Children's and Youth Literature today.

The Alicante creator Ximo Abadía is one of the flagship authors of Zahorí Books who achieves in his books a visual harmony of illustration and text that reminds us a lot of the proposals of Manuel Marsol, bridging the gap. La montaña is undoubtedly, and above all else, a love song for nature, as was its predecessor La playa. But it is also an exploration, a trip to the conglomerate of opportunities that the mountain offers us from all points of view, including the sports and leisure activities that can be done there (from 3-4 years). Also in Catalan.

Second installment of the photographic tales of the Austro-Hungarian artist Camille Koffler (better known as Ylla) who is being recovered by the Kalandraka publishing house to the applause of the public who loves so-called photoliterature. The first installment was Dos ositos, one of the author's most representative works, published in the mid-50s of the 20th century. The story of these two cubs who disobey their mother is followed by Todos lo vio, published for the first time in 1944 and part of this series of four books that the photographer Ylla and the writer Margaret Wise produced together. A story where animals, large and small, are the protagonists, as well as their reaction to an event that causes different reactions in each one of them. A story with a good dose of suspense and a hint of reflection (from 3-4 years). Also in Catalan and Galician.

Halfway between the traditional tale and social denunciation, this Calamity Island is characterized by exuberance, especially its colorful illustrations. The Italian illustrator Simone Spellucci was inspired by the island of Dominica to recreate this illustrated album that has been awarded a prestigious White Raven this year that we have just left. Climate change is also wreaking havoc on this island in the Lesser Antilles, where the forces of nature, wind, ocean and hurricanes (Vanté, Lanmé and Hura in the Creole language spoken there) destroy as much as they create, giving rise to to a new and possible story (from 5-6 years).

Collecting is one of the oldest and most universal forms of leisure that exist. Lucie Brunellière reminds us of this in these Collector's Treasures, a precious work that allows us to delve into the most amazing collections one can imagine. From the jewels recovered from the sea by the conchologist who opens the book, to the wonderful books treasured by the bibliophile, passing through the canicophile, the mycophile, the platocaolinophile or the mineralogist. Stones, minerals, plates, snow globes, matchboxes... Everything is capable of being collected and this book is nothing more than a precious showcase in which to admire these collections. Also in Catalan (from 6 years).

What age would we recommend for Thank you Mother Earth! , the carousel book published by Akiara? Well, for everyone from the age of three, including parents, older siblings, uncles or grandparents. It is a beautiful illustrated work that does justice to the publisher's name, that plays with the Japanese word "Akira", which means "luminous", and that "illuminates" us in more ways than one, since one of the most unknown in our country is the North American Indians. Thus, we will undoubtedly be surprised by this thanksgiving of the confederation of the Six Iroquois Nations, recited for centuries every morning in a territory that extends between the United States and Canada. A song, a declaration of love for the Earth and all its living beings, an act of gratitude for the nature that surrounds us, for plants, whether medicinal or edible, for animals, trees, birds... The illustrations are by Vanina Starkoff and the translation by Inês Castel-Blanco, and both, words and letters, make up this book that unfolds to form a large mural of Creation. Marvelous. Also in Catalan.

An inspiring and absolutely true story, the one told by Librarians on horseback, with versions in Catalan and Basque, published by A fin de cuentos. When the Great Depression occurred in the United States, in 1929, thousands of people lost their jobs, in the cities, also in the countryside and in the most isolated areas. President Roosevelt's New Deal tried to alleviate this situation by creating jobs across the country and in all sectors, forcing many men to leave their families and move far away. Alone, the women had to lead their own, but suddenly a project took them into account: the librarians. His job would be to bring books to the most isolated areas of the mountains and central states. Isolated in such a literal sense that only books allowed them to have contact with the outside world, to know that there were other ways of living, other worlds, animals, people. They were so remote places that sometimes you could only get there on horseback, and that's what these pioneers did. A book for children from seven years old and for adults, because many people, specifically the one who writes this, were unaware of this story with so much heart. Magnificent story and equally magnificent illustrations by the author, Concha Pasamar, with a very retro air. And very American.

In the kitchens of ancient China it was customary to make a mixture of salt, sulfur and coal to better preserve food. But on one occasion and by accident, around the year 820, a cook brought the mixture too close to the fire and it all exploded in the air. Do you know what caused that error? Well, in effect, it was the beginning of the fireworks that would make the Chinese the world experts in fireworks. This is just one of the examples of Blessed Errors, another of the interesting books that Mosquito Books has accustomed us to, where the most notorious errors in history are explored and what important discoveries they gave rise to. Soledad Romero and Montse Galbany go through history in search of error, “that brilliant protagonist of all learning, research and creation processes. Error after error, success arrives and humanity manages to evolve”, they tell us. Penicillin, coffee, champagne, the microwave or the eraser are some of the blessed errors that circulate in this magnificent artistic-literary bet. For all curious minds.

Not only fiction lives the reader. Impedimenta knows this and years ago it developed a line of illustrated books to which this Arboretum belongs, within the Visit our museum collection. Volumes of great size and exquisite quality on paper, something rare today, in the texts and illustrations. This work, curated by Katie Scott and Tony Lirkham, joins the previous Animalium, with which the Historium series began, which brought together the best of the collections of 39 major museums in the world, History of life. Evolution, with the 3,500 million years of evolution summarized in a two-meter-long accordion book, Botanicum, Dinosaurium, Anatomicum, Oceanaurium, Fungarium, Planetarium... Each one dedicated to examining in depth the disciplines indicated by their title, they have in common the detail and quality of the illustrations and the rigorous amenity of its texts, making each copy an authentic paper museum, which can be visited 24 hours a day, over and over again. Age? Again for everyone. Well, maybe the little ones don't know so much, but it's never a bad time to start an education, and enjoy quality. As with this Arboretum that brings us closer to trees from all over the planet.

Books of knowledge have recently opened an interesting path in regards to the human body, where the part prevails over the whole. That is to say, from treating the human body as a whole (there we have the magnificent work by Hélène Druvert, Anatomy, edited by Maeva) to treating only a small part. Teeth, feet, hair, runny nose, etc... Ignacio Sanz and Moisés Yagües sharpen their flowery verse to speak to the little ones (from 3-4 years old) about the hand as a tool but also as an element of solidarity and brotherhood. Writing, brushing teeth, tying shoes, salting the stew, piloting boats, ironing shirts, saying goodbye... The possibilities are endless, both together and separately. The only thing that changes is the nature of the actions where the concept of united or separated comes into play. The touch of humor makes it a charming proposition.

We declare ourselves unconditionally fans of the stories that Annika Leone and Bettina Johansson have created around Mila's family, in a series of books that have the word butts in their titles and as a common denominator. Fans for the humor, freshness and naturalness with which they treat human bodies, often drawn in their complete nudity, and in the most common situations for a family that lives comfortably in their bodies and their nudity. After a visit to the pool (1, 2, 3 ¡Culos!) and another to the beach (3, 2, 1 ¡Culos al sol!), now the family goes camping in ¡Culos sin miedo!, a fun story where the backdrop is the human body with all its magnificent flaws. At the moment, only the Spanish edition is for sale, but we intuit, based on the previous titles, that Gato Sueco will also publish it in Catalan and Basque (from 5-6 years).