Tedros, a second term for a WHO in the spotlight

More than two years after the covid exposed the nakedness of the global health system, the World Health Organization (WHO) now faces a moment of transition. 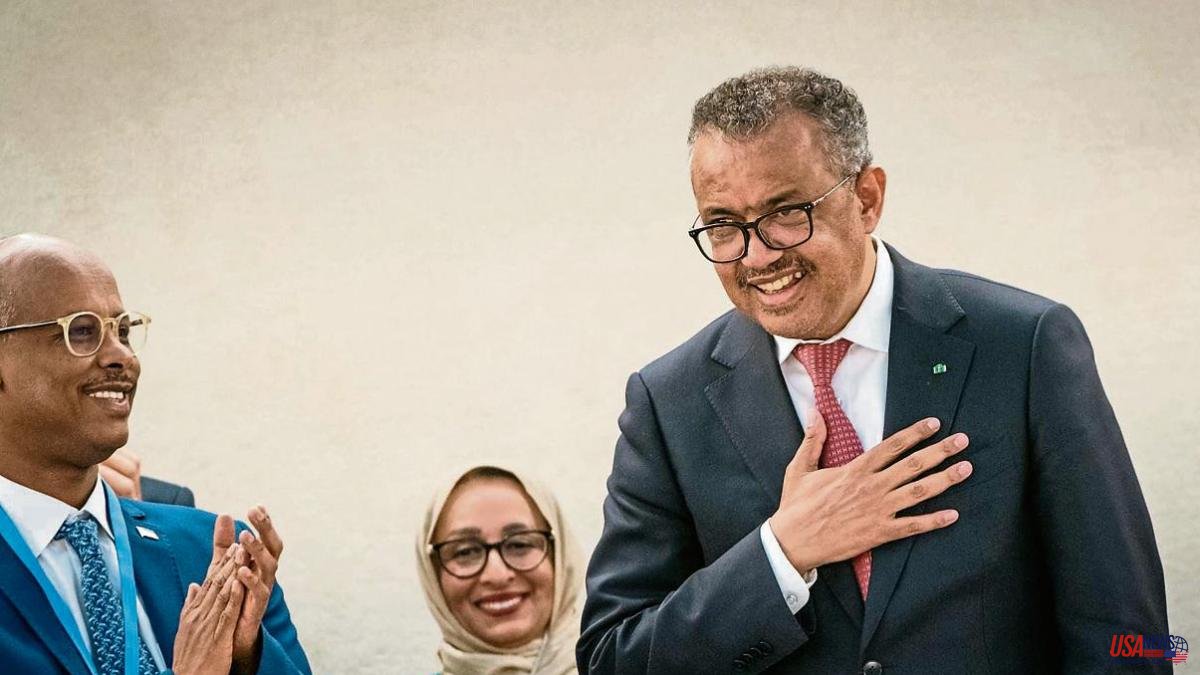 More than two years after the covid exposed the nakedness of the global health system, the World Health Organization (WHO) now faces a moment of transition. Its director general, the Ethiopian Tedros Adhanom Ghebreyesus, has been re-elected for a second five-year term with the aim of reinforcing a UN agency in the spotlight for its management of the pandemic. Everyone has come to the conclusion that expanding the body's ability to react is imperative if the world wants to better deal with future health crises.

For this reason, the WHO general assembly held this week in Geneva, seen as the first major face-to-face event after the restrictions, has been able to agree to reform the way in which the organization is financed, which depends too much on voluntary donations and too little on mandatory contributions from member states. The plan would involve increasing these state fees to 50% of the organization's total budget by the end of the decade.

"It would be expected that the highest percentage would be mandatory because it is guaranteed and is more flexible in the long term, however this only represents between 15% and 20%," explains Javier Guzmán, director of the global health policy program at the Center for Global Development. "Raising it to 50% is nothing compared to the costs of not having a strong WHO that can respond to global health needs," he added.

This is good news for Dr. Tedros, as he likes to be called, who has interpreted his re-election – he was the only candidate to stand – as support for the work carried out over the years. “Strengthening preparedness, response and resilience to health emergencies is a priority. The pandemic has shown that the world was not prepared”, he told the general assembly.

Tedros became the familiar face of an organization that was going through the most difficult challenge in its history and that has had much more political visibility than in the past. It has also received a lot of criticism for, among other things, the slowness or errors in the initial response to covid. He was even accused by some of being too tolerant in serving China.

Tedros' re-election comes just after the Ethiopian first clashed with Chinese authorities over his handling of the virus. A few weeks ago, for the first time the WHO publicly questioned the "unsustainable" covid zero policy of the Asian giant, which has confined the 25 million inhabitants of its most populous city -Shanghai- with harsh restrictions that not only test the mental health of citizens, but also economic growth.

Earlier, the WHO leader had already lamented that US investigations into the origin of the virus were being hampered by a lack of data. Mario Esteban, a researcher at the Elcano Royal Institute, rules out that despite this China is going to change its technique. “Now in the fall there is the National Congress of the Chinese Communist Party and Xi Jinping is expected to be re-elected. It is not expected that they will make a public rectification before the congress because it would weaken his figure, ”he explains on the phone.

The Chinese regime quickly censored Tedros' words and moved to prevent them from being released on the country's platforms to prevent discontent from growing. It was impossible to find the reviews on the popular WeChat. It is a notable change after the Ethiopian biologist was branded as a puppet in the service of China. The controversy was so great that even former US President Donald Trump decided to suspend payments to the agency due to its alleged pro-Chinese bias.

"The relationship between China and Dr. Tedros is long, he was chosen in part because of the support he had from China," says Yanzhong Huang, a health expert at the Council on Foreign Relations. “China needs the WHO to legitimize its health policies – he adds – and the WHO needs China because its cooperation is essential if we want to discover the origins of the virus”.

After the controversies over China, now the war in Ukraine could generate a new political division in the WHO. This week the annual assembly approved a resolution condemning Russia's military aggression and denouncing the health emergency it has caused and Russian attacks on Ukrainian medical facilities, a text that was approved with 12 countries voting against. Among them, that of China.