Tebas: "I'm from Real Madrid, I prefer Benzema to Lewandowski"

Javier Tebas, president of LaLiga, has once again been the protagonist for some controversial statements in which he has made his madridismo clear. 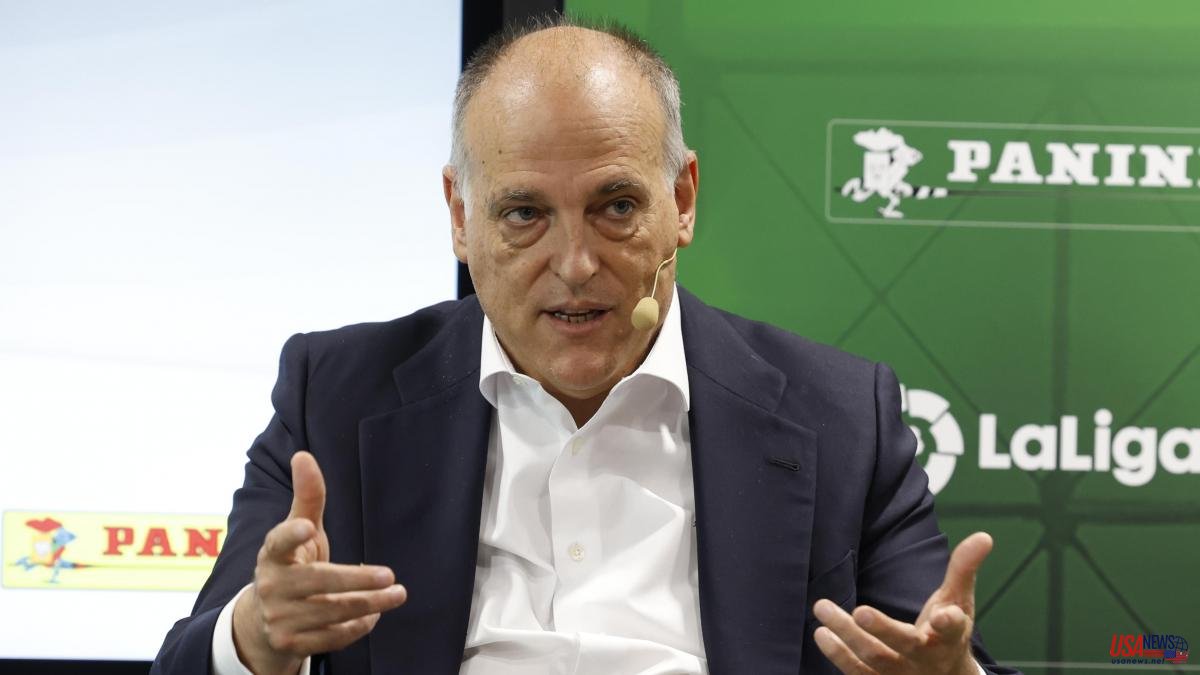 Javier Tebas, president of LaLiga, has once again been the protagonist for some controversial statements in which he has made his madridismo clear. Asked if he preferred Benzema or Lewandowski, the president did not hesitate: "I am from Real Madrid, as I have always recognized, therefore, I prefer Benzema", he stated before adding that even Tchouaméni "will be more decisive than Lewandowski ”.

During the presentation of the Panini sticker collection, he declared that Frenchman Aurelien Tchouaméni, signed by Real Madrid, "many of us are going to be surprised by the level of this player. The scorers always draw a lot of attention, but because of the position he plays and what we are seeing is going to be very different from what we are used to seeing”.

Tebas has also referred to the frustrated signing this summer of Kylian Mbappé by Real Madrid and has assured that they had "a card reserved for him". The top manager of LaLiga stressed that, although the Frenchman is not in the Spanish championship, there are other players who shine the competition like Tchouaméni.

The Spanish League has completed its first four League games and Real Madrid and Barcelona are proving to be the strongest teams at the moment. "We will have to see if it is a League of two. We will see the evolution. That has to be seen over several seasons. For example, last year, apart from the champion Real Madrid, we had a Champions League semi-finalist with Villarreal. The level we have is good," he said.

Tebas also spoke about the summer market closed just five days ago and that left the English League as the championship that has spent the most money with 2,200 million euros, well above the rest of the European championships. "It is typical of the Spaniards to underestimate what is ours. I remember years ago when Rafael Nadal fell in the round of 16 in Australia and many journalists spoke that he had to retire. Everything here is always pessimistic, without making a deep analysis such as knowing that it is difficult to compare with countries with double the population," he stressed.

"We are what we are but we are very high. We have been the first in the UEFA classification for several years and we do not speak if we waste money or not. The football market is changing. Now, for example, the players are arriving more free than by sale. Before They were sold when there was a year left and now they hold on. In England that effect has not arrived, "he confessed.

"We are quite happy with how the market has gone. We calculate 325-350 million euros in the market and it has been more (505 million euros). Not only does the English League exist and the reasons will have to be explained, like every year. If you pull from other years you will see the answer. The Bundesliga is the same and I don't see them so worried," he said.

"You have to see that the Spanish teams have kept great players. You not only have to see the ability to buy but to stay. There are four other European Leagues that are the same and nothing has changed. We will have to see what is happening in the League English," he commented.

The president of LaLiga attended the presentation of the cards together with Lluis Torrent, general director of Panini Spain, who highlighted that this season the color chosen to illustrate the album is green, "the color of the stadium mat and the color of hope ".