Tango D10S, the plane that will allow

Diego Armando Maradona will be 'present' at the 2022 Qatar World Cup. 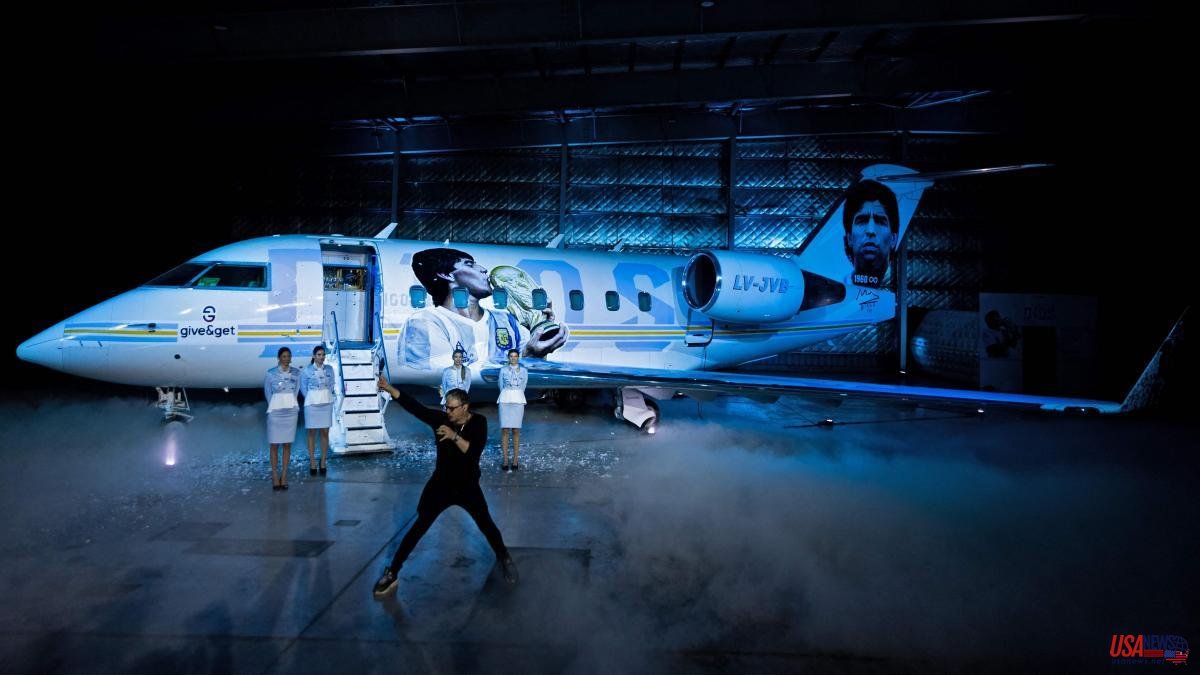 Diego Armando Maradona will be 'present' at the 2022 Qatar World Cup. This Wednesday, the Give and Get business group presented in Morón, in the province of Buenos Aires, the Tango D10S, a jet that honors the 'Golden Boy', who died in November 2020, and which will fly to the Middle East at the end of the year. Through artificial intelligence, passengers will even be able to 'dialogue' with the football legend.

Creative agency Genosha digitized and synthesized Maradona's voice, with the help of an actor, and programmed it to answer questions from fans. They also included expressions that the star never pronounced, in order to expand the possibilities of "interaction" with the former captain of the national team. "It is a logistical delirium, of image, sound, lighting, visual and auditory curatorship," explained the executive director of the Argentine company, Martín Rabaglia, to Infobae.

The plane, which also functions as a traveling museum that will travel the world, was designed by the plastic artist Maximiliano Bagnasco. On the outside, a string of images of the 'Golden Boy' is painted, including the photograph of Maradona kissing the World Cup that the albiceleste team raised in the 1986 World Cup and his two goals in the quarterfinal victory against England, the 'Hand of God' and 'the goal of the century'.

The Tango D10S, which has a dozen seats, will tour Argentina before heading to Qatar in November, although it can also be rented for private use. The idea is that Maradona's teammates in the feat of Mexico can use the aircraft to go to support the albiceleste in the Middle East. It will then be auctioned off and the money raised will be donated to charity.

“I am sick of Maradona. I am one of those who still go to sleep watching videos of Diego. It gives me complete happiness. This is the first World Cup without Maradona and perhaps the last for Messi. And I said: 'I want to make Diego's plane,'" explained Gastón Kolker, executive director of Give and Get, about the origin of the project. He also clarified that his will is for the ship to pass through Mexico, Naples, Dubai and "all the places that were emblematic in Maradona's life."

In addition to the possibility of 'conversing' with the 'Pelusa', the vehicle is designed as a museum that remembers the legacy of the '10'. The interior includes memorabilia donated by the former player's family and by teammates from the team that won the World Cup in 1986. Argentine fans will be able to see the exhibition and record a voice message in the cockpit in memory of him .

The former Argentine international defender Juan Pablo Sorín was in charge of directing the event in which the aircraft was presented, at the Morón Airport. The event also included the participation of celebrities such as the journalist Agustina Casanova, the extensive Juan Martín del Potro or former soccer players Fernando Cavenaghi, Ariel Ortega, Sergio Batista and Ricardo Bochini. Dalma and Giannina Maradona, daughters of the star, were also present.

“We cannot believe this madness and love, which transcends absolutely everything. How far can a fanatic go? Even a plane”, declared Dalma. On her part, Giannina expressed that they always have in her memory the memory of her father. "It's something we live with every day," she said.

In early May, the shirt that Diego Maradona wore in the quarterfinals of the 1986 World Cup in Mexico was sold for 8.4 million euros to a buyer whose identity was not revealed. The stud turned the shirt, with which he scored the 'Hand of God' and 'the goal of the century', into the most valuable piece of sports memorabilia in history.

The sale of the elastic was not without controversy. Dalma Maradona assured that the shirt was not that of the 'Hand of God' and that Steve Hodge, player of the English team who suffered the 'cosmic kite' in the match and the person who gave the elastic to auction it, was not the owner of the original garment. Dalma explained that his father had worn this jacket in the first half of the match against England, not in the second—when he scored both goals. "How am I going to give him the shirt of my life?" His father would have said.