Tampering with democracy and the photo of Columbus

Two politicians as far removed from each other as Alberto Núñez Feijóo and Pablo Iglesias yesterday requested the advancement of the elections after two days in which the entire parliamentary arc has certified the death of Spanish democracy, or almost. 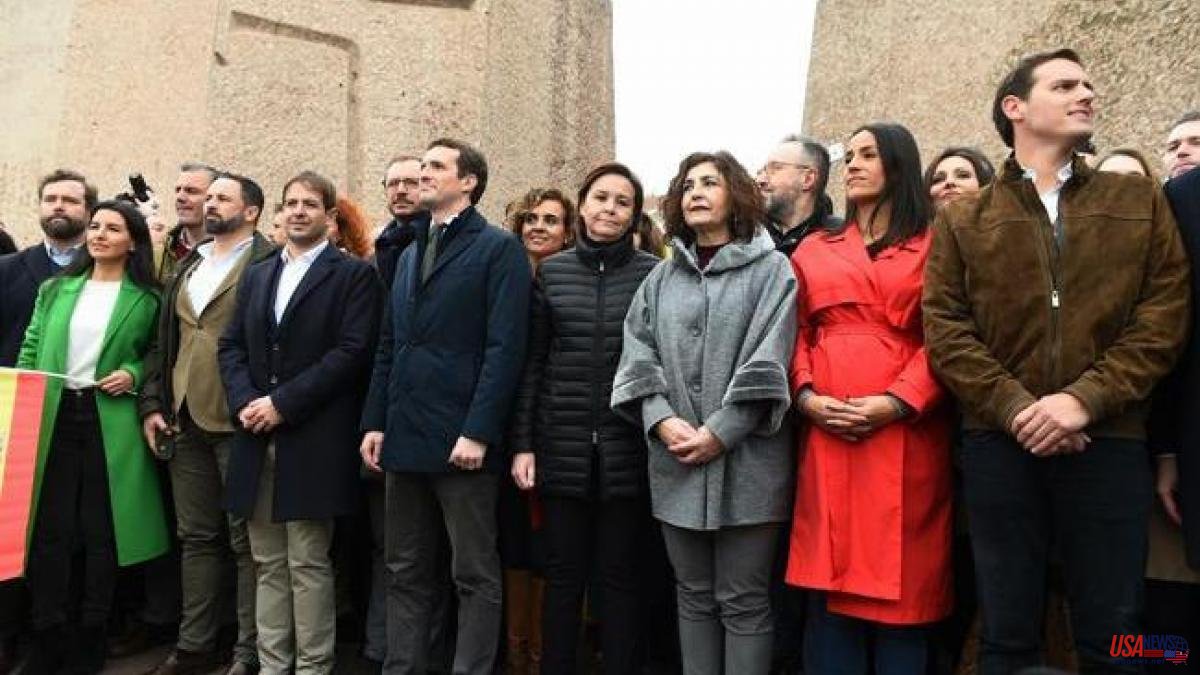 Two politicians as far removed from each other as Alberto Núñez Feijóo and Pablo Iglesias yesterday requested the advancement of the elections after two days in which the entire parliamentary arc has certified the death of Spanish democracy, or almost. Why do they both come to the same conclusion?

The decision of the Constitutional Court to prevent the Senate from voting on a legislative reform initiative constitutes a major institutional crisis. These days, jurists are busy in disquisitions on whether the Constitution has been adjusted to the law or not, but the struggle between the legislature and the judiciary continues to be a reflection of the merciless war between the political bloc that surrounds Pedro Sánchez and the right. In this matter, moreover, the president has all his allies without exception. Hence, it is relevant to know who benefits or harms this clash.

What is the strategy of PP and PSOE? The two are going to present themselves as defenders of a democracy outraged by their rival.

For the popular, it is essential to mix the renewal of the judicial leadership with Sánchez's intentions on Catalonia, that is, with the changes in embezzlement and sedition agreed with ERC. The PP complains that the Socialists take advantage of the fact that Pisuerga passes through Valladolid to change the majorities in the courts with an amendment to the Penal Code, which has nothing to do with it. But at the same time they put as a condition to agree on the renewal of the judges that Sánchez renounces touching on embezzlement and sedition and that he recovers the calling of an illegal referendum as a crime. Either the two things mix or they separate. That it is convenient for the PP to unite and shake them is evident: "Either this government or Spain," Feijóo sentenced.

That is the message of the popular. The same one that has marked the step of the right since Sánchez is president with the support of the Catalan and Basque independence movement. “Sánchez is legitimately president? Yes, but what is not legitimate is what he is doing, ”the PP leader insisted this week. And what is he doing? Feijóo responded like this: "Put the foundations of Spanish democracy at stake."

The speech of the lack of legitimacy of the Government returns, accompanied by appeals to the defense of democracy in danger at the hands of an irresponsible president. What is the solution, according to the PP? Return the word to the citizens through elections.

Sánchez's version is different, although some ingredients are repeated, such as the call to protect democracy. "Democracy will prevail," the president has proclaimed twice this week. In other words, it is being attacked.

Sánchez conveys to the citizens that the right, in collusion with the high judiciary, is trying to appropriate justice through salon machinations. Faced with these hidden powers, the president appeals to the "popular will", that is, to return power to the people, to Parliament, where he will insist on approving the now frustrated reform, this time through another formal procedure, slower, but immaculate. . "Serenity", but "firmness", he said yesterday.

Thus, the PP would have provided the Government with the opportunity to establish itself as a defender of the "popular will" against those who intend to kidnap it with bad arts. A spring to mobilize the electorate of the left. It was immediately captured by Pablo Iglesias, who surely must have thought that we are facing a new "momentum" like the one experienced as a result of the "photo of Columbus", when Sánchez suddenly called elections taking advantage of the image of communion of PP, Ciudadanos and Vox.

But politics today is a continuous corkage of fleeting effervescences. Let's see if from so much tampering with democracy, voters don't want to go out and defend it at the polls.