Taiwan prepares its anti-aircraft shelters before the rise in tension between China and the US.

Taiwan prepares its bomb shelters and rehearses with its citizens. 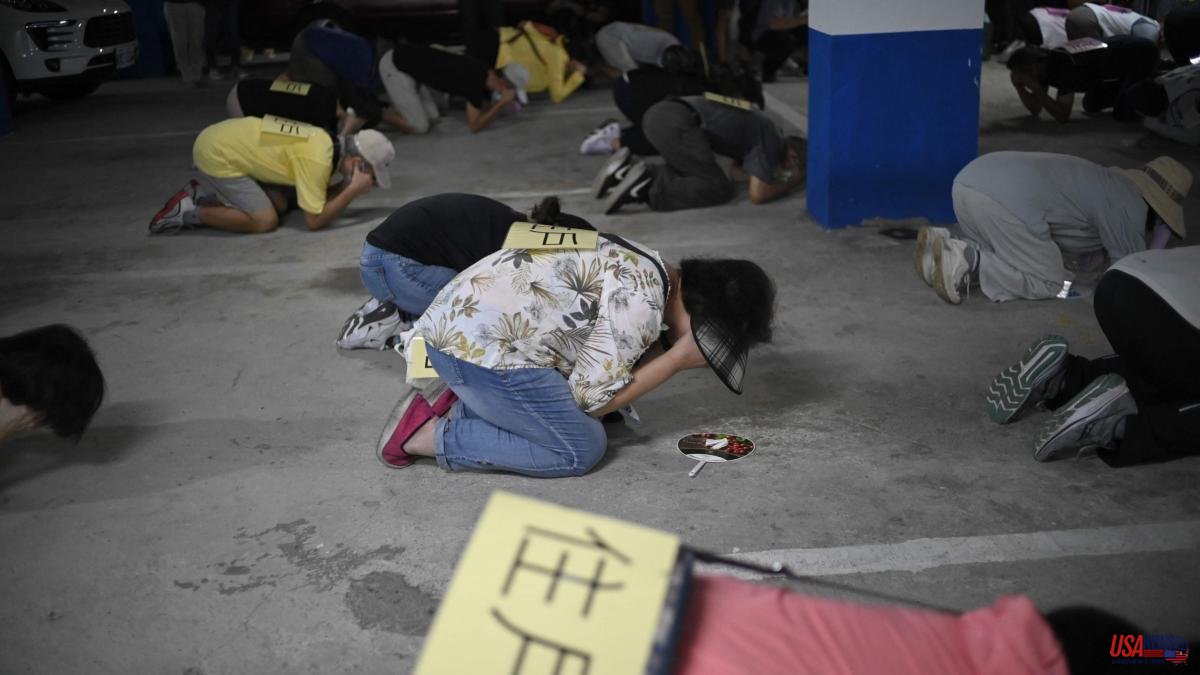 Taiwan prepares its bomb shelters and rehearses with its citizens. The growing tension between China and the United States due to the possible visit of the president of the US Congress, Nancy Pelosi, and the Russian invasion of Ukraine once again raise fears of the possibility of an attack by the Chinese Army on the democratic island. In fact, as the time for the awkward guest's arrival approaches tonight, Beijing is flying its fighters and bringing warships close to the unofficial dividing line.

The capital, Taipei, has more than 4,600 shelters where people can find safety if Chinese missiles start flying. In total, they can shelter some 12 million people, more than four times their population. They are not purpose-built bunkers, but spaces that already exist underground such as car parks, subway stations or underground shopping malls.

Taiwanese authorities have carried out several mock air raids over the past week and mobilized their army for routine defense exercises. According to the local agency CNA, for the first time in 45 years, the annual Wanan exercise required the participation of civilians, who were evacuated from the streets to shelters. The objective was to raise awareness and prepare the population for possible military aggression now that relations with China are heated.

In the capital the sirens sounded on Monday at lunchtime. City streets emptied and shops closed for 30 minutes. Using a newly developed app, Taiwanese could locate the nearest shelter to go to, and police evacuated drivers and passengers from vehicles. The entrances to the shelters are marked with a yellow label, the size of an A4 sheet, with the maximum number of people it can accommodate.

A campaign on social networks and posters in the city explained how to proceed. "When everyone gets the text, don't panic," Taiwanese President Tsai Ing Wen asked on Facebook on the day of the exercise. "Citizens, please evacuate according to the instructions," added Tsai, who has made increasing defense capacity her top priority and said that only her people can decide their future.

China regards Taiwan as its own territory and has increased military activity in the air and seas around it. Especially given the possible visit of Pelosi, which has ignited diplomacy. Chinese Foreign Ministry spokeswoman Hua Chunying assured on Tuesday that the island (and the entire region) faces "disastrous consequences" if "the United States mismanages the situation in the strait." It is "hard to imagine a more reckless and provocative action" than Pelosi's visit, Hua said.

"In recent years, Chinese military aircraft have frequently harassed Taiwan, and the war between Russia and Ukraine broke out in February this year," Taipei Mayor Ko Wen Je told reporters, citing concerns. that a similar conflict could break out in East Asia. "All these things make us understand the importance of being vigilant in times of peace and we must be prepared if there is a war."

Authorities are required by law to keep shelters clean and open, but they do not need to be stocked with supplies like food and water. Some parliamentary investigators in June called for what is necessary to survive there to be provided. Wu Enoch, of the ruling Democratic Progressive Party, said citizens should have prepared survival kits with medicine and even tools to build a makeshift toilet.

After a decade of saber rattling across the Taiwan Strait separating the democratic island from China, many Taiwanese seem resigned to living with the threat of a Chinese invasion and have welcomed the drills. "The tensions between Russia and the US have made Taiwan more insecure, with the drill I feel safer," a Taiwanese woman told the island's CNA news agency.

"Having a shelter is very necessary. We don't know when a war might come and it's to keep us safe," 18-year-old Harmony Wu told Reuters near a Taipei subway station. "War is brutal. We have never experienced it, so we are not prepared," she added. And a friend who accompanied her, responded to the same agency: "I'm not stressed. I continue with my life as usual. When it happens, it will happen," said Teresa Chang, 17 years old.