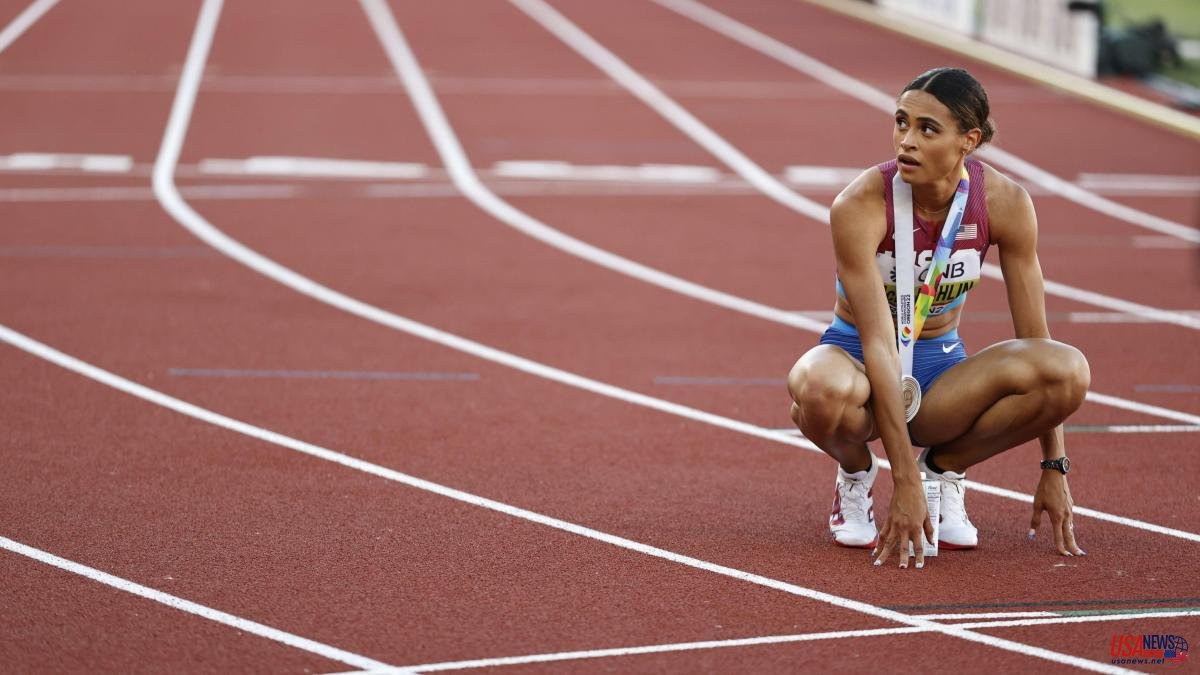 -Look at Sydney McLaughlin. It's just that she doesn't even look at the camera, Xavier Gallego tells me.

Gallego is one of the souls of Carrer Lliure, a blog specialized in Catalan athletics. And also, he is the father of Sara Gallego.

Sara Gallego is the sprinter who twice this summer has broken the Spanish record for the 400m hurdles and who has reached the semi-finals here in Eugene.

"Look closely, McLaughlin doesn't even smile," Xavier Gallego repeats, pulling me out of my reverie.

And it's true: in the tense preludes to the final of the 400 hurdles, the camera focuses on the contenders for the title. They all smile, make monkeys, raise their arms, look at the public.

She stares at the synthetic, rhythmizes the shaking of her hips, she seems alienated.

Or perhaps concentrated. Set to spark awe at Hayward Field.

And then it explodes.

His explosion is magnificent, a gift for the senses, because McLaughlin does not seem to pass hurdles and crosses the 100 in 12.26 and the 200 in 24.25, and at that point he has already opened a margin of seven tenths over Femke Bol, the 22-year-old Dutch sensation who has been chasing McLaughlin for a couple of years now but no, there is no way, the American leaves and leaves.

And McLaughlin's passage through the 300 already announces a wonder: he crosses it in 37.02 and accelerates even more, to the astonishment of the congregation, who stand up because they are witnessing a portentous exercise.

More than half a second below the record that she herself had set last year, at the Tokyo 2020 Games: specifically, 0.73 hundredths.

-It's unreal, isn't it? McLaughlin says to himself. Although the last 100 did some real damage.

Well, it is the abyss.

And the astonishment, it has already been said before: with those 50s68, McLaughlin would have been seventh in the final of the 400 smooth that Shaunae Miller-Uibo has won twenty minutes earlier (49s11).

And even so, McLaughlin remains tense, an American star in a World Cup full of American stars, a woman-announcement who exceeds one million followers on Instagram and whose profile proclaims:

And now, repeat the message:

"I am very grateful to God," she says later, before the international press.

And I ask Sara Gallego, the rival who has seen her up close (both had competed together in the first series, last Tuesday):

-McLaughlin, did you impose on the call room?

-Not so much because of its dimensions -answers Sara Gallego-, because it is not too bulky. If she imposes it is rather because of her dry look. And by her presence. She doesn't speak, she doesn't communicate. And because she is who she is, what am I going to tell her.

The progress is amazing, although skeptics appear on the scene. Edwin Moses, legend of the discipline in the 80s and 90s (he remained undefeated for nine years, nine months and nine days), talks about synthetics and the new shoes, the magic sneakers.

"It's like having levers in your soles," says Moses.

Bob Kersee, McLaughlin's coach since the beginning of 2021, defends his pupil:

Experts such as José Luis López, professor at the INEFC in Barcelona, ​​interpret that there has been an evolution in its rhythmic structure:

-I had already seen it clearly between 2019 and 2021, and I am seeing another change in this 2022. McLaughlin lengthens the length of the step and thus takes fewer strides -he says.

Sydney McLaughlin doesn't answer the skeptics. She collects her check for $100,000 for the World Cup record and walks out that door, serious and tense as she is.