Suárez, devastated, charges against FIFA: "Proud to be Uruguayan even if they don't respect us"

The elimination of Uruguay from the World Cup in Qatar 2022, after the insufficient victory of his team against Ghana (0-2), with two penalties claimed by the sky-blue team and not whistled by referee Daniel Siebert has brought a tail. 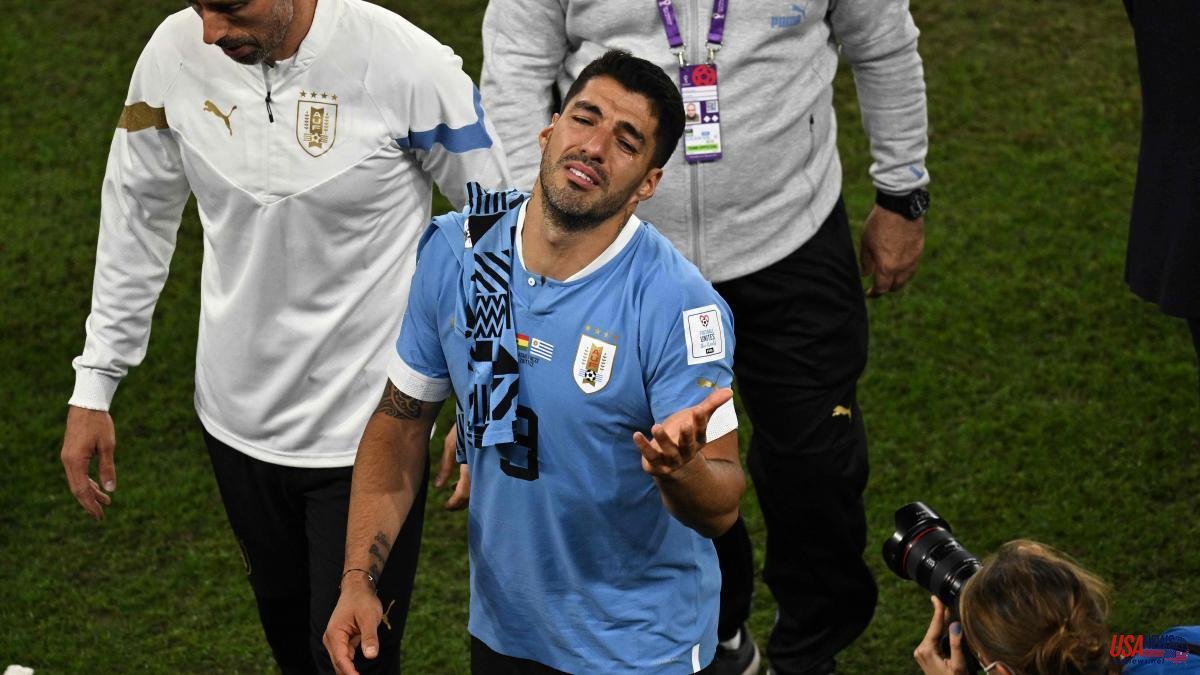 The elimination of Uruguay from the World Cup in Qatar 2022, after the insufficient victory of his team against Ghana (0-2), with two penalties claimed by the sky-blue team and not whistled by referee Daniel Siebert has brought a tail. From Cavani knocking down the VAR monitor, to Giménez's elbow to a FIFA worker, going through the desolation and anger of a Luis Suárez who hinted at his goodbye to the national team.

The former Barcelona and Atlético de Madrid player showed his emotion through social networks with a heartfelt tweet in which he wrote: "Saying goodbye to a World Cup like this hurts a lot, but we have the peace of mind that we left everything for our country. Proud of Being Uruguayan even if they don't respect us. Thanks to each one of the Uruguayans who supported us in every part of the world!", he wrote on social networks hours after being left out of the round of 16 of the tournament.

The Uruguayan gave a glimpse of his goodbye to the national team after what has been his fourth World Cup: "Now it's time to encourage our teammates for everything that follows," he told the press through tears after the game. "I felt sadness, disappointment, I was lucky to play my fourth World Cup. But for my four-year-old son to see his father say goodbye with this image of sadness, it's hard for a father. It's difficult, it's time to face the situation and encourage the companions for all that follows".

Suárez was very critical of the refereeing and the treatment he received from FIFA, which prevented his children from accessing the dressing room. "I wanted to give a hug to my children and my wife and people from FIFA come saying they can't bring my children down. The other day a player from France was with his children on the substitute bench. I asked why it's always against Uruguay "said the footballer. "It seems that Uruguay has to have another power at the media level to allow my children to pass. But it is FIFA," he complained.

There were also complaints for the arbitration performance. The 35-year-old striker claimed two penalties, one from Edinson Cavani and the other from Darwin Núnez. "It's a penalty for Edi, it cuts off his career, he puts his body in front. After Darwin's it's also very clear. They're not excuses, but incredible penalties are taken in the World Cup. The referees' committee is there, they have to explain themselves better", Indian.

His teammate Cavani went further in his protest and after rebuking the German referee Daniel Siebert in an ostensible way, on his way to the locker room he knocked down the VAR monitor in a fit of rage, which was left on the ground.

The unsportsmanlike attitudes of the Uruguayan team did not end here. The television cameras captured the attack by José María Giménez on a FIFA employee on the pitch. In the aforementioned images, it can be seen how the defender of the Uruguayan team goes towards the referee, among the noise that there was already of his teammates around the referee, and, when he approaches a person in the FIFA suit, he raises his elbow and hits him on the back of the head, while he continues on his way to the referee to protest the two penalties that he did not take during the duel and that could have meant Celeste's classification. FIFA will now open a disciplinary procedure that will analyze the fact and determine whether or not there is a sanction for the footballer.

Uruguay ended its path in this World Cup and Suárez expressed his "sadness and disappointment" for the elimination. "Today is a day to reflect on the fact that we gave our best in this game. We had to win and we did, but we depended on another result. We reached this point by ourselves, I feel sadness and disappointment, that's what I feel today", concluded.